Micah Avni on Monday called on the United Nations Human Rights Council to condemn the murder of his father, Richard Lakin who was killed in an October terror attack in Jerusalem. 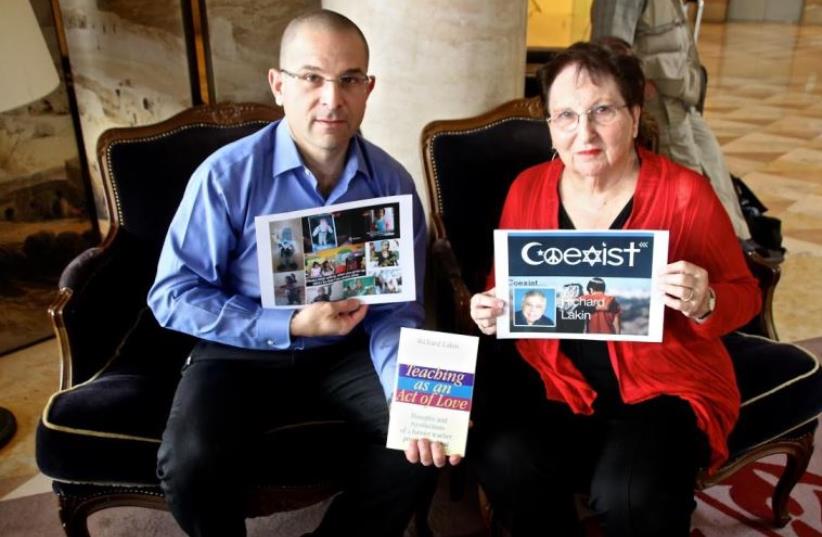 Michah Lakin Avni and Karen Lakin
(photo credit: TOVAH LAZAROFF)
Advertisement
Micah Avni called on the United Nations Human Rights Council on Monday to condemn the murder of his father, Richard Lakin, who died two weeks after being mortally wounded in an October 13 terrorist attack in Jerusalem.“My father, Richard Lakin, was a kind, gentle person – an elementary school principal who educated thousands of children, a human rights activist dedicated to promoting coexistence,” Avni told the UNHRC as it met in Geneva.“He [Richard Lakin] marched with Martin Luther King, Jr. He founded a school in Israel where Muslim, Christian and Jewish children studied together. He wrote a book called Teaching as an Act of Love,” Avni noted.Avni traveled from Jerusalem to Geneva to address the UNHRC during its debate on “Israeli violations of human rights in the Palestinian territories.”Some speakers at the session attacked Israel for killing Palestinians without mentioning that many of the slain were shot while attacking Israelis. Lakin – who held both American and Israeli citizenship – was one of the 34 Israeli victims killed since September in those attacks, Avni said.“Last October, two Palestinian terrorists attacked a bus full of civilians in Jerusalem. They shot my 76-year old father in the head, and stabbed him multiple times after he fell, severing most of his vital organs,” Avni said.“Secretary-General Ban Ki-moon came to visit my father in the hospital before he died. He wrote my mother a private condolence letter,” he added.“What the secretary-general, and you – the UN investigator on Israel – and this council, did not do was publicly condemn these terrorists or the rampant Palestinian incitement that fuels this brutality,” Avni said.“Palestinians are not preparing for peace. Instead, Palestinian leader [Mahmoud] Abbas praised my father’s murderer – calling him a “martyr,” Avni said.The UN has a web page devoted to global terrorism, but neither Lakin nor any other Israeli victim of terrorism since September is on that list, he said.“I am here today from Israel to issue a direct challenge to the secretary-general, the high commissioner, and this council: killing civilians on a bus is terrorism. I challenge you to specifically condemn the murder of my father, Richard Lakin.“I challenge you to condemn President Abbas for calling my dad’s murderer a ‘martyr,’ and for his hateful incitement to violence.“The passionate goal of my father and the people of Israel is peaceful coexistence.Your failure to condemn Palestinian violence and your continued rationalization of Palestinian terrorism is pushing peace away, making more death inevitable,” Avni said.Avni addressed the UNHRC in the time alloted to the Institute on Human Rights and the Holocaust, a graduate division of New York’s Touro College.In his report to the UNHRC, written prior to Avni’s statement, the UN High Commissioner for Human Rights, Zeid bin Ra’ad al-Hussein, condemned what he described as a “wave of seemingly random attacks against Israelis.”Strategic Affairs Minister Gilad Erdan later said he supported Avni’s call for Ban to condemn the murder of Israelis, and Palestinian incitement to terrorism.“I join Micah and the victims of the latest wave of Palestinian terrorism in calling on the international community to stop its hypocrisy, and unequivocally condemn the murderous terror attacks arrived out against Israelis,” Erdan stated.The minister added that Richard Lakin was killed by Palestinians who were “brainwashed by the Palestinian Authority’s schools and Palestinian social media to believe that those who kill Jews are heroes.” Erdan pointed out that the terrorist who killed Lakin was described as a “noble martyr” by PA President Mahmoud Abbas.Erdan also called on donor countries to stop funding PA and UNRWA schools as long as their books include messages of incitement.