The award by the Friends of Zion Heritage Center is given to world leaders for exemplary support of the State of Israel and the Jewish people. 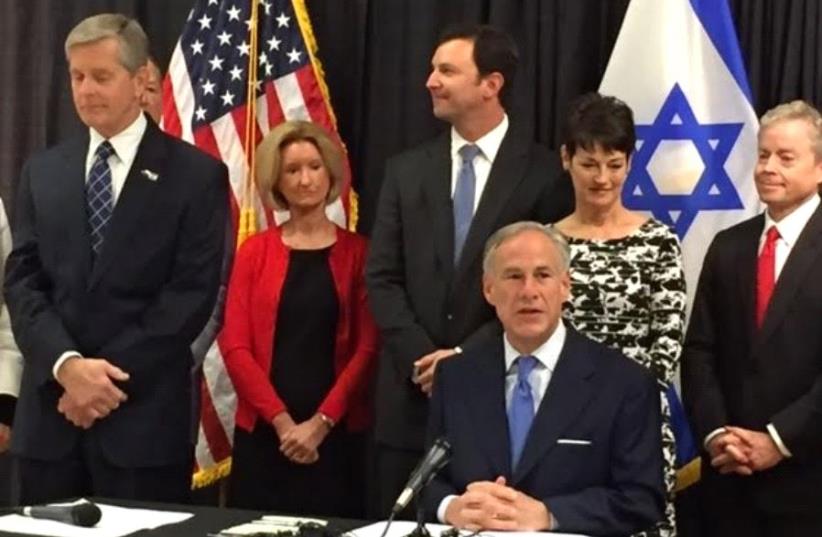 Texas Governor Greg Abbott signs anti-BDS bill into law
(photo credit: JENNIFER KAUFMAN)
Advertisement
Governor of Texas Greg Abbott received the Friends of Zion award on a recent visit to Jerusalem.
The award by the Friends of Zion Heritage Center is given to world leaders for exemplary support of the State of Israel and the Jewish people.
Abbott has served as the governor of Texas since January 2015.
"There are strong relations between Texas and Israel. Anybody who is an enemy of Israel is an enemy of Texas. Whenever anybody threatens Israel, we come side by side with Israel to support Israel in any way we can," said Abbott at the ceremony.
An anti-boycott law was signed by Abbott on Israel's Independence Day in 2017 to limit groups from divesting and sanctioning Israel. Texas was the 18th state to condemn and officially stand against the Boycott, Divest and Sanctions (BDS) movement.
Abbott has visited Israel twice since taking office to discuss economic trade missions and has advocated for Israel on social media.
Other leaders who have received the Friends of Zion award include US Presidents George W. Bush and Donald Trump.
"I appreciate and admire the work of my governor, Greg Abbott. His dedication to anti-BDS laws and building stronger economic ties shows that there are those in the world that are willing and proud to support the State of Israel. Governor Abbot is a true Friend of Zion and espouses the unbreakable bond between the State of Israel and the United States of America," said Dr. Mike Evans, founder of the Friends of Zion Museum in Jerusalem.
The Friends of Zion Heritage Center recently announced a new communication center that will become one of official press hubs and communication centers in Israel in the 5th World Holocaust Forum hosted by the State of Israel.
The Center is in the process of creating a think tank, associated with Christian think tanks around the world in an attempt to educate political, economic and media leaders. An online institution and an educational platform will work to educate people worldwide to fight antisemitism and advocate for Israel.