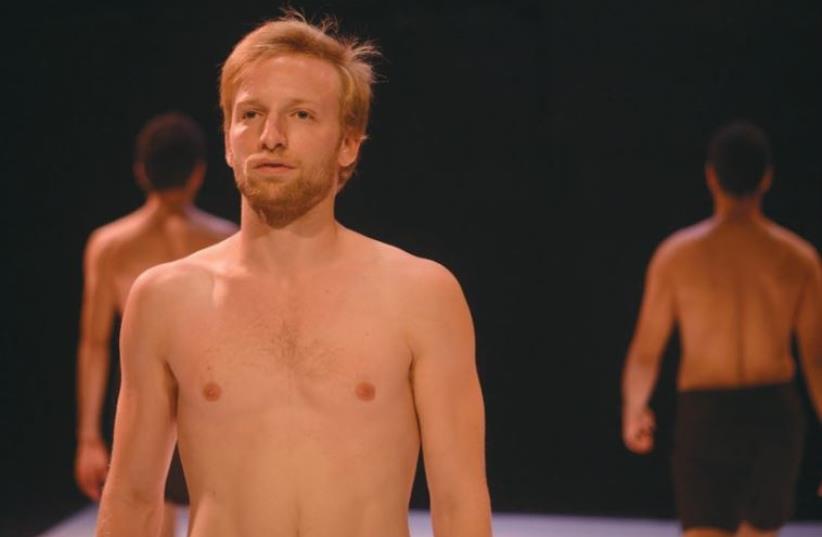 Tamir Eting (front) performs in Roy Assaf’s ‘Boys.’
(photo credit: KEREN KRAIZER)
Advertisement
When people move out of town, they usually organize a send-off party. Instead of (or perhaps in addition to) standing around with a cocktail talking about what the future holds, Tamir Eting will bid farewell to Tel Aviv with two performances. The 25-year-old dancer is Amsterdam bound, where he will pursue a bachelor’s degree in choreography at the reputable SNDO (School for New Dance Development). Before leaving, Eting will literally enjoy a last dance in Roy Assaf’s Boys this weekend and next month in Noa Zuk and Ohad Fishof’s Garden of Minutes.Though young, Eting has become a vibrant and noticeable member of the local dance community. Eting’s effortless physicality and versatility make him stand out.Seven years ago, Eting arrived to Kibbutz Ga’aton without having ever set foot in a dance class. His gymnastics training had instilled a physical discipline that came in handy, however, Eting knew that if he wanted to transition to live performance, he would have to hit the ground running.“I spent six months on the kibbutz and then I fell in love with Tel Aviv,” says Eting over iced coffee at Rothschild 12. “Yehudit Arnon told me about Naomi Perlov’s program (Maslool Professional Dance Program), so I called her up. She told me to come take class with her the next day.Afterwards she said, ‘you’re at zero. You know nothing. You will have to catch up really quickly. You’ll always be in the back and I’m not sure you’ll make it.’” But make it Eting did, and more. Two years after his first encounter with Perlov, Eting was offered a place as an apprentice with the Batsheva Ensemble. A year after that he was given a spot in the young company, where he stayed for the next two years. In 2014, Eting left Batsheva and joined the freelance scene, where he was quickly snatched up by several leading choreographers.Along with performing, Eting tried his hand at producing, pulling together two hit evenings, Mixtape and Home Alone, for the Batsheva Ensemble. These events created such a stir that Eting started to receive invitations to weigh in on brainstorming sessions with Batsheva’s managerial team as well as to curate happenings with actor and director Yehezkel Lazarov.And though from the outside it appeared that Eting was living the dream, he found himself searching for more.“I feel that I need more freedom in order to feel more free. The situation here, politically and financially, is not allowing me to be courageous enough. I want to be part of a system that will support me and all of my interests. I think that if you want to be an artist, you have to really go for it and that’s what I hope the time at SNDO will allow me to do.”Boys will run at Warehouse 2 on June 4 at 6 p.m. and 9 p.m. (www.choreographers.org.il).Garden of Minutes will run at the Tel Aviv Museum of Art as part of the Kontrapunkt Series on July 2 (www.tamuseum.org.il).