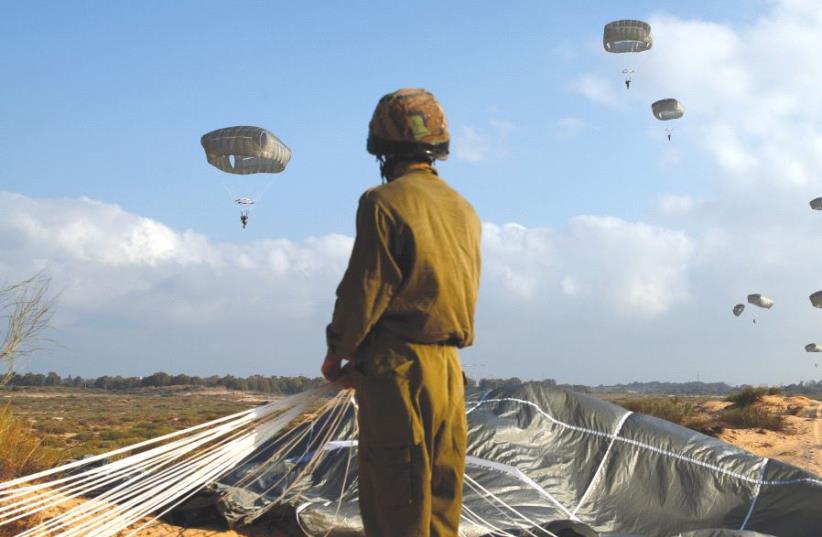 An Israeli paratrooper takes part in a military exercise at the Palmahim air force base
(photo credit: REUTERS)
Advertisement
Fine Art Financier Marc Leibowitz revealed on Twitter on Friday a letter written by his Battalion Commander 25 years ago when Leibowitz was a young Israeli Paratrooper. The name of that commander? Aviv Kochavi, who was announced as the next IDF Chief of Staff on Friday.

25 years ago, when I was a young Israeli Paratrooper in the 101st Battalion, all the guys in the unit said that one day Aviv Kochavi, our Battalion Commander, would be Chief of Staff of the IDF.
That day has come.
I feel lucky to have served under his command. pic.twitter.com/6dhaSGbzIb
— Marc Leibowitz (@Marc_Leibowitz) October 26, 2018

"All the guys in the unit said that one day Aviv Kochavi, our Battalion Commander, would be Chief of Staff of the IDF," wrote Leibowitz. "That day has come.""I feel fortunate to have served under his command," Leibowitz added.  In his letter, Kochavi congratulates the young men under his command for volunteering to the elite fighting unit and finishing the demanding course."This is [being] a Paratrooper and this is volunteering," wrote Kochavi, "a way of life that without it...life would not have been possible."