Inside the yearly Zionist Quiz, sponsored by The World Zionist Organization, the Zionist Council in Israel and the Ministry of Jerusalem and Heritage, 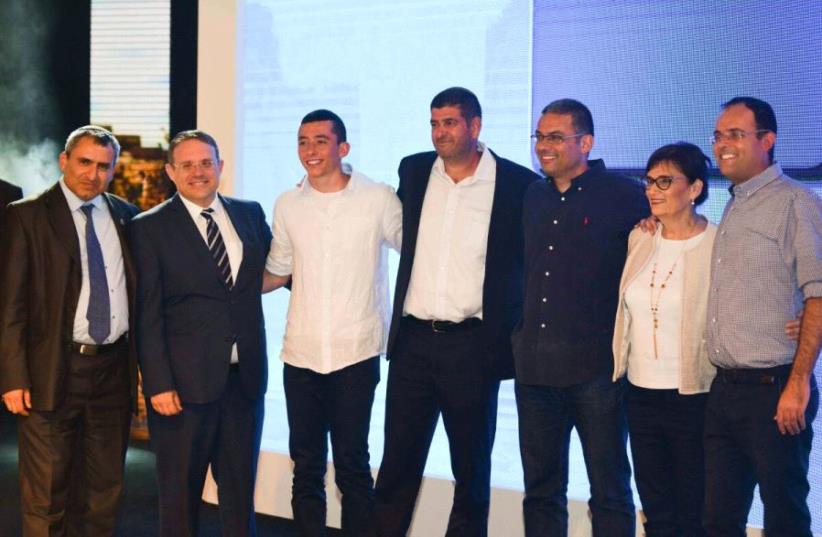 The Zionist Quiz
(photo credit: COURTESY WORLD ZIONIST ORGANIZATION)
Advertisement
Every year, on the evening of Independence Day, the Zionist Quiz, sponsored by The World Zionist Organization, the Zionist Council in Israel and the Ministry of Jerusalem and Heritage is broadcast on national Israeli television. This year, the Dinour family, from Givat Shmuel, beat nine finalist families, in the Zionist quiz. The final was broadcast on Israeli Channel 10 and presented by Eli Yatzpan at The Jerusalem Theater.Minister of Jerusalem and Heritage and Minister of Environmental Protection, Zeev Elkin, Chairman of the World Zionist Organization, Avraham Duvdevani, Deputy and Acting Chairman of the World Zionist Organization, Yaakov Hagoel, Chairman of the Zionist Council in Israel, Yigal Bibi, the Director General of the Zionist Council in Israel, Yigal Brand and the Deputy Director General of The Zionist Council in Israel, Shlomi Ashkenazi, were present at the quiz. Around 15,000 people took part this year in the Zionist quiz in Israel and around the world, including some 2,000 participants from the United States, a surprising figure that showing the strong connection of American Jews to the  history and developments in the country.At the end of Independence Day, 10 families competed in the final. The questions focused on the 120th anniversary of the First Zionist Congress in Basel, the 100th anniversary of the Balfour Declaration, the 70th anniversary of the United Nations Declaration and the 50th anniversary of the liberation of Jerusalem. The Dinour family from Givat Shmuel won the Final, Pnina (Grandmother), Shai (Father), Yonatan (Uncle) and Yuval (the son). The family won a flight and a tour following in the footsteps of Herzl around EuropeElkin congratulated the winners stating, "I congratulate the Dinour family from Givat Shmuel for winning the quiz of Zionism and heritage. All ten finalists who joined the thousands who participated in the quiz prove that Zionism is not a matter of the past. Zionism is alive and kicking!”“The connection of different generations created here in a quiz is wonderful to me. This year we mark the Jubilee Year celebrating the unification of the city and I invite the entire public to learn about Zionism and our heritage, and visit Jerusalem and its’ various sites."Hagoel also spoke of the event, stating, "In such an interactive era, it is important to strengthen the young generation to their Zionist heritage.”“The World Zionist Organization, via the Zionist quiz, provides an opportunity to strengthen the Zionist identity of the entire public through this emotional and exciting event, travelling through important stages in the history of the Jewish people.” Brand added, "The Zionist Council in Israel stresses the importance of events from the history and heritage of the people in Israel and the Diaspora throughout the entire year. The Zionist quiz shows a connection to the values and to the family history of the people of Israel to a wide range of audiences.”