Father of soldier killed in training accident salutes his son after giving a moving eulogy. 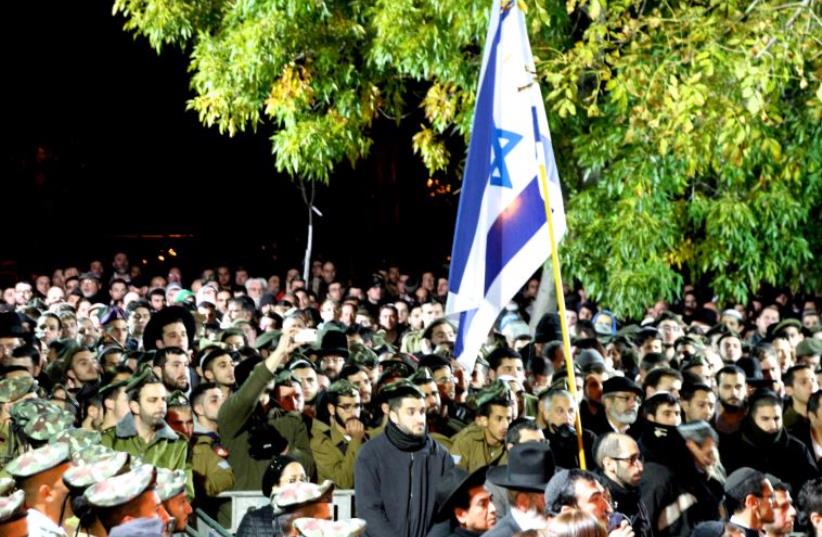 Funeral for soldier accidently killed in training exercise
(photo credit: TOVAH LAZAROFF)
Advertisement
The first and last letter Aharon Rosales ever wrote to his son Ishai was the eulogy he read out loud by the freshly covered grave in Jerusalem’s Mount Herzl Military Cemetery early Thursday morning.“Your mother and I would wait for you to walk into the house with your large smile.Now you will never walk through our door again,” said Aharon.He stood under a bright outdoor lighting system that broke the cemetery’s chilly darkness. Although it was just past 1 a.m., thousands of mourners crowded around Aharon as he uttered his last words to his son in softly spoken Spanish, immediately translated into Hebrew and carried over a microphone system.The Rosales family had moved to Israel from Mexico in 2001. Aharon and his wife live in the religious moshav of Beit Meir, off the highway outside Jerusalem, on the way to Tel Aviv.Ishai, their second of five children, was a lieutenant and company commander in the Kfir infantry brigade. He was killed on Tuesday at the Tze’elim base in the Negev when a mortar shell exploded during a combat drill.He was posthumously promoted to captain. Hours before the funeral, Ishai’s parents made a public plea for people to attend the funeral.As Aharon looked out at the mourners, he said that he lacked the proper words to bid farewell to his son, who had given his life for his people and his new country.“In the 24 hours since you were taken from us, I heard so many stories about you that I never knew,” he said.“We can’t imagine the Sabbath table without you. There will be an empty chair for you at the table each Shabbat so that you will remain a part of us,” Aharon said.“You have left us here with a broken heart but we are happy because we know that you are in heaven,” he continued.“We love you, we will always love you,” Aharon added.Ishai’s younger brother Michael, 21, who is also serving in the IDF, said, “Everyone who knew him, loved him.”In a sing-song voice, Rabbi Yitzhak Adelson said the Rosales family had the option of staying in Mexico where they could have had everything, but chose instead to come to Israel.“You didn’t have to come. You volunteered to come,” said Adelson.Ishai’s commander said that the young man was an amazing leader, a modest man and a true friend, who had a good sense of humor. He worried, understood, taught and invested in his soldiers, as if they were his own children.“He did everything with a smile.Nothing was too difficult,” the commander said.Addressing Ishai, he said, “I was proud to march by your side. I trusted you with any mission, as you guarded our country, you made use of every moment to advance yourself.”When he finished speaking, he saluted Ishai.