"This is not a religious conflict." 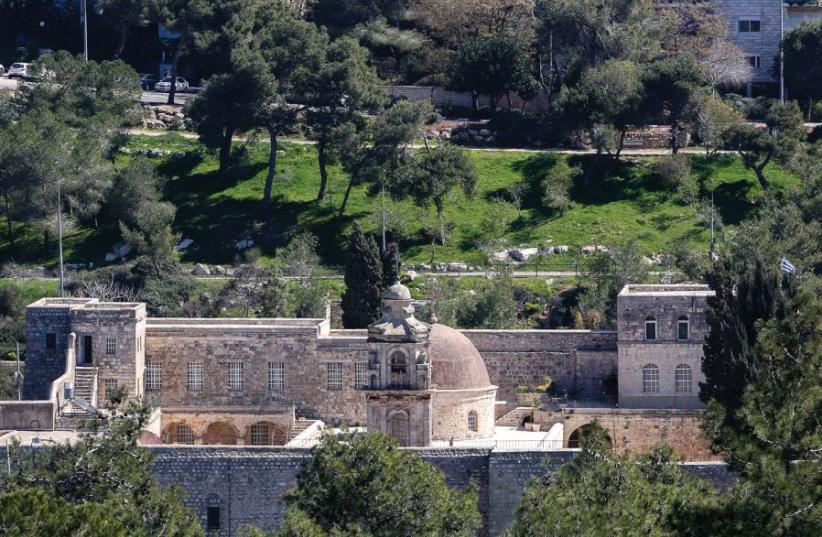 Valley of the Cross Jerusalem
(photo credit: MARC ISRAEL SELLEM)
Advertisement
The Greek Orthodox Church must keep religion out of its criticism to ease the consequences of its land sales, Jerusalem’s municipal opposition leader said this week.In response to the open letter issued by heads of churches in Jerusalem in September, City Councilwoman Fleur Hassan- Nahoum (Yerushalmim) told The Jerusalem Post Wednesday that bringing in a religious element is only further complicating the situation.“This is not a religious conflict. This is a business deal that they have done that affects thousands of people, and they did it in an irresponsible way – without checking what would happen to those people,” she said. “It is possible that they don’t care, but then don’t claim that you are spiritual leaders.”In the letter, the heads of multiple churches based in Jerusalem protested against what they see as a “systematic attempt to undermine the integrity of the Holy City of Jerusalem and the Holy Land, and to weaken the Christian presence.”They addressed two main issues that they see as problematic: The first is a Jerusalem District Court ruling from August that the acquisition of three major compounds adjacent to Jaffa Gate was carried out legally and, as a result, were transferred from the Greek Orthodox Church to the right-wing Ateret Kohanim Yeshiva.The second issue is a bill proposed by Kulanu MK Rachel Azaria (a former member of the Yerushalmim faction), signed by 40 MKs across the political spectrum, that seeks to nationalize lands owned by churches in western Jerusalem, many of which were sold to private entrepreneurs.Hassan-Nahoum said the aim of the letter was to satisfy the Palestinian public and to “soften the blow” of them selling lands to Jews – a move considered highly controversial among Arabs locally.“Making it a religious issue, turns Jerusalem – which is a very delicate city, with a lot of conflict – into a very difficult place for the religions. I think that a business deal that people are questioning is not a justification to make such sweeping statements.“We know we live in a place that a statement from a religious leader can cause devastation the next day,” she said. “Be a little responsible with your words.”Hassan-Nahoum dismissed the claim that there is an attempt to weaken the Christian presence in the capital.“I can’t understand how you can do a deal with private people or companies [in which lands are being sold]... and then have the gall to say that we – the State of Israel – are undermining your presence in the Holy City,” she said.Last month the councilwoman sent a letter to the heads of church and conveyed her wish to meet with them and resolve the issue. She said she didn’t receive a response.These large-scale real estate deals – not only in Jerusalem but all over the country – also attracted criticism from Greek Orthodox Arabs, who’ve said they oppose the selling of land.“This is not a sale, this is theft,” Peter Habash, an activist in the Greek Orthodox community told Haaretz.“These are trust properties, they should not be sold. Trust is wakf, and wakf means standing still – and it should stay in the hands of the Church for the benefit of the community.”According to reports, the Greek Orthodox Church – one of largest land owners in the country – sold many properties all over Jerusalem, mainly in the area of Rehavia, Nayot, Katamon and Givat Oranim.Due to this change of ownership – which will be felt in practice after the leases from the Jewish National Fund end in the next 20 to 50 years – residents living on these properties face uncertainties that will lower the value of the assets and sometimes even affect their day-to-day lives.For example, it was reported that elderly residents living on a high floor faced troubles installing an elevator in one of the buildings. Hassan-Nahoum said she encountered issues of people who wanted to move into an elderly home but couldn’t sell their apartment.She said she is operating on two fronts to advance this issue. She helped establish the Jerusalem Church Land Task Force, which unionized residents from different neighborhoods who might be harmed from the deals, and has advanced finding legal solutions.Recently, Justice Minister Ayelet Shaked ordered a special legal committee to find a solution. The panel, headed by Deputy Attorney-General Erez Kaminitz, will meet next month.Hassan-Nahoum said she gathered a group of lawyers, in which some are British and are familiar with British law, that could help.“In Britain, there is a lot of precedent for this. There, the crown owns a huge amount of land and when you buy an apartment you’re buying a leasehold from the crown,” she said.In Israel, the resident should have the first right of renewal of the lease, she said.”They should automatically be the only people who can buy their own leases.”On Wednesday, Greek Orthodox Patriarch Theophilos III met with Pope Francis at the Vatican and expressed similar concerns to those made in the letter.The Vatican responded by saying it would follow the matters “in the most appropriate manner.”In response to Hassan-Nahoum, the Greek Patriarchate said that as a large religious institution operating in Israel, Jordan and the Palestinian Authority, it runs its properties with only one goal – to support the day-to-day existence of its community.“In light of its past financial situation, the Patriarchate has no option but to make necessary reforms,” it said.“These issues that are on the Israeli national agenda, such as [Azaria’s] bill and the court decision, might significantly change the rights of the churches on their lands and property, and thus breach the religious status quo in Israel and in Jerusalem, specifically.”