The street near the military headquarters flooded with thousands of protestors who rallied against the government's controversial position. 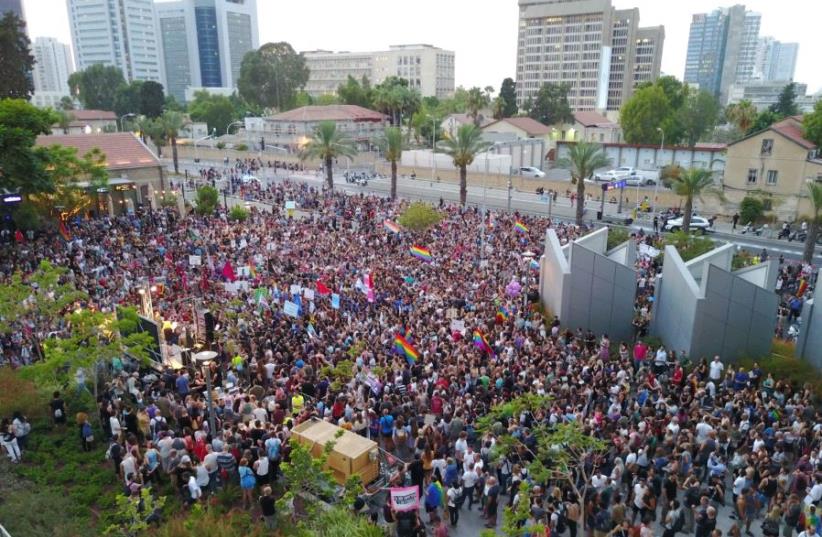 LGBT protesters in Tel Aviv
(photo credit: OMER SHALEV)
Advertisement
Thousands of protestors took to the street in Tel Aviv near the military headquarters to express their dismay at the government's answer to the High Court of Justice announcing its opposition to adoption by same-sex couples. The government has changed its position on the issue several times. Ahead of the protest, the government requested more time from the High Court to revise its evaluation and provide their decision. The protestors held signs reading "We are not second class citizens,"  and "Bibi go home." Singer Harel Skaat, who is gay and is said to be going through adoption troubles himself, said that it was "very touching" to see everyone coming together for the cause.
Fights break out at LGBT rally in Tel Aviv (credit: Avshalom Shoshani)
Television anchor Nadav Borenstein, who emcee'd the rally, said "Me and my partner went around the entire world to try and be parents, and the country that we're citizens of is refusing to accept that our daughters are ours." "We pay taxes like straight people, go to the army like straight people, why can't we have kids like straight people?" he continued. Zehava Gal-On, the head of Meretz, said "In Israel in 2017, we will not just let homophobia be. So many children are lookoing for a warm and loving home, and they're finding one just because of a conservative and ignorant government."The head of the Knesset's LGBT Caucus, Michal Rosin, said that the government is "ignorant and prejudiced" and blamed the religious monopoly on the government for "giving up on beautiful families" simply because they aren't 'traditional' families. Fights reportedly broke out between protestors and police, with some reported arrests. Kaplan Street was closed, with traffic backing up in other parts of the city.