The four victims, all men in their 20s, are residents of a nearby settlement; One person sustained serious wounds, according to initial reports. 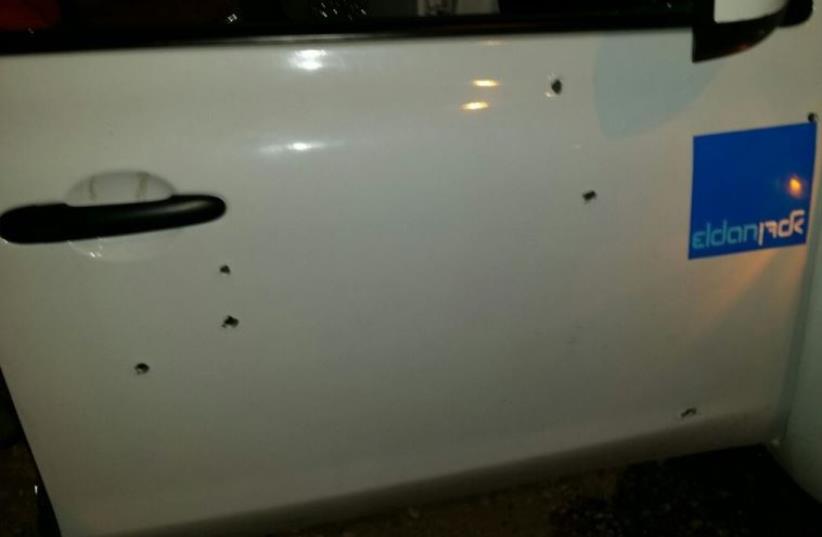 Vehicle with bullet hole punctures on the scene of a shooting attack in the West Bank, June 29, 2015
(photo credit: TAZPIT)
Advertisement
Shots were fired late Monday toward an Israeli vehicle traveling near the West Bank settlements of Shilo and Shvut Rachel in a possible terrorist attack attempt. At least four people were initially reported injured, with three people sustaining serious wounds and one with light-to-moderate wounds. Motives behind the incident were not yet clear.
Four hurt after shots fired in West Bank terrorist attack
Emergency workers provided initial medical treatment on the scene before the wounded were evacuated to hospitals. Further details were expected to be released soon. Earlier Monday, a female IDF military police officer sustained moderate-to-serious wounds after being stabbed in the neck by a female terrorist at the south Jerusalem security checkpoint Rachel’s Crossing, in what police are deeming a terrorist attack.Israeli security forces said on Monday afternoon that the terrorist who carried out the attack confessed under interrogation that her intention was to kill an IDF soldier. The suspect was identified as 20-year-old Misun Musa, a resident of Bethlehem who was not known to security forces and had no previous arrests.