US Joint Chiefs of Staff Chairman General Joseph Dunford pointed at Iran, Hezbollah and Syria threats during Israel visit and promises US collaboration as the challenges mount in the region. 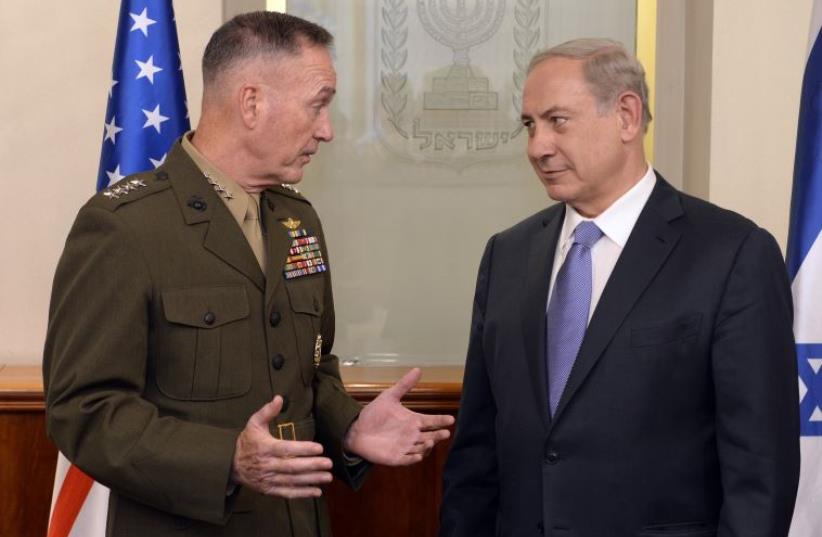 US Joint Chiefs of Staff, Gen. Joseph Dunford with Prime Minister Benjamin Netanyahu, October 18, 2015
(photo credit: MATTY STERN/U.S. EMBASSY TEL AVIV)
Advertisement
Jerusalem is concerned Iran may build a powerful new front against Israel if it is allowed to play a role in enforcing the Russian-proposed de-escalation zones in southern Syria, Gen. Joseph Dunford, chairman of the US Joint Chiefs of Staff, said during a visit to Israel this week, according to a statement published on Thursday.An agreement on de-escalation zones and safe zones in several large areas of western and southern Syria, including along the Israeli border on the Golan Heights, was signed last week in Astana, Kazakhstan, by Russia, Iran and Turkey.And while Israel is pleased with progress being made in the fight against ISIS, it is concerned about the role Tehran will play in the region and particularly in Syria, starting “the day ISIS is defeated,” he said.“Clearly, the major concern is Iran’s influence in the region – their malign activities in the region, what’s happening with Iran in Iraq and Iran in Syria,” the general said, according to the Department of Defense news site.“The greatest challenge from Iran is the Iranian threat network,” which includes the Revolutionary Guard Quds Force and the support it provides for Hezbollah, Dunford said, adding that should the Lebanese Shi’ite terrorist group attack, Israel “would have two fronts to deal with.”Dunford, who made a third official visit this past week, told reporters traveling with him that his talks with Israeli leaders dealt with Iran’s influence in the region, Hezbollah’s presence in southern Syria, and the deployment of the Islamic State group in Syria near the Israeli and Jordanian borders.“To be clear, the Russians proposed these deconfliction zones in Astana,” Dunford said. Moscow would like the United States to be a part of the deal, but no decision has yet been made, he said.“What we are doing now is prudently talking to military planners, and in our conversations with the Israelis we are asking about the proposal and what it would look like on the ground,” Dunford said, adding that “it is fair to say that the Israelis would want to make sure that their security concerns are addressed.”
Netanyahu says US should lead the way in "setting clear boundaries" for Iran
Transportation and Intelligence Minister Israel Katz, returning on Thursday from meetings with senior intelligence officials in the US, also warned against Iran’s and Hezbollah’s growth in Syria, particularly in the south of the country.Katz warned against the creation of an Iran-dominated territorial continuum from Iran through Iraq and Syria to Hezbollah in Lebanon.An Iranian military presence in Syria and Lebanon would obligate Israel to allocate significant resources to enhance its preparedness on the Golan Heights and in the Galilee.The minister urged the Americans to impose additional sanctions on both Iran and Hezbollah, which is building weapons with the aid its receives from Tehran, in order to weaken the terrorist group and prevent a situation in which it attacks Israel and Israel has to attack Lebanon.