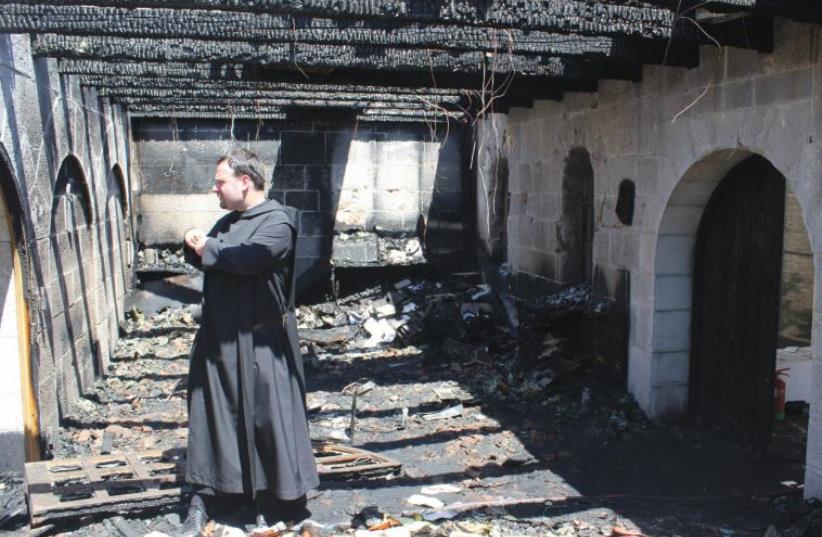 FATHER NIKODEMUS SCHNABEL inspects the damage at Capernaum’s Church of the Loaves and Fishes caused by an arson attack
(photo credit: BEN HARTMAN)
Advertisement
With his inflammatory statements in favor of burning churches, Rabbi Bentzi Gopstein spoke not only against democratic values but also against Jewish values, said Dean of the Shaarei Mishpat Academic Center, Professor Aviad HaCohen on Thursday. Professor HaCohen dismissed as "halachic nonsense" comments by the extremist leader of the radical Lehava anti-assimilation and anti-missionary organization, made during a panel debate Tuesday on idol worship. Citing Maimonides' ruling that due to various aspects of Christian practice and theology, Christianity is idolatry, Gopstein asserted that idolatry needs to be destroyed in accordance with the  commandment in Deuteronomy to destroy idol worship in the Land of Israel. Thus, in theory, Gopstein said he was in favor of burning churches in Israel."You can't take halacha from Maimonides that was written 800 years ago and put it into today's reality as though nothing has happened in the meantime," countered Rabbi HaCohen, saying that anyone who knows anything about Torah should reject Gopstein's comments. "The Jewish people always knew to differ between theoretical halacha and practical issues."
Suspected arson on Church of the Multiplication in the Galilee
He added that in a country where 25% of the population is not Jewish, one must respect the rest of the population and protect their places of worship even if they don't agree with them. HaCohen referenced a letter about minority rights in Israel written by Israel's first chief rabbi, Yitzhak HaLevi Herzog: "One of the reasons the UN gave us permission to establish the state of Israel, was our duty to give freedom to all religions and to protect the holy sites of all religions."He added that modern-day Christians are not the same as worshipers of ancient times and are not considered idolaters, according to Jewish scholars.  Citing Rabbi Menachem HaMeiri, a famous Catalan Talmudist, HaCohen added that Christians do not want to abolish the Jewish people, therefore, Jews should respect them and should not interfere with their freedom of religion. Moreover, he said, "Jewish halacha scholars always knew that you have to take into account not only formal halachot but also implications of the halacha on the whole Jewish people."
Jewish extremism expert discusses radicalism
"Just imagine what will happen if we demolish christian holy sites in Israel - what will happen to Jews in Europe and America? If we do it to them, they will do it to us too."