The Torah scroll dedicated in Max’s honor will ideally be used by other soldiers in the army. 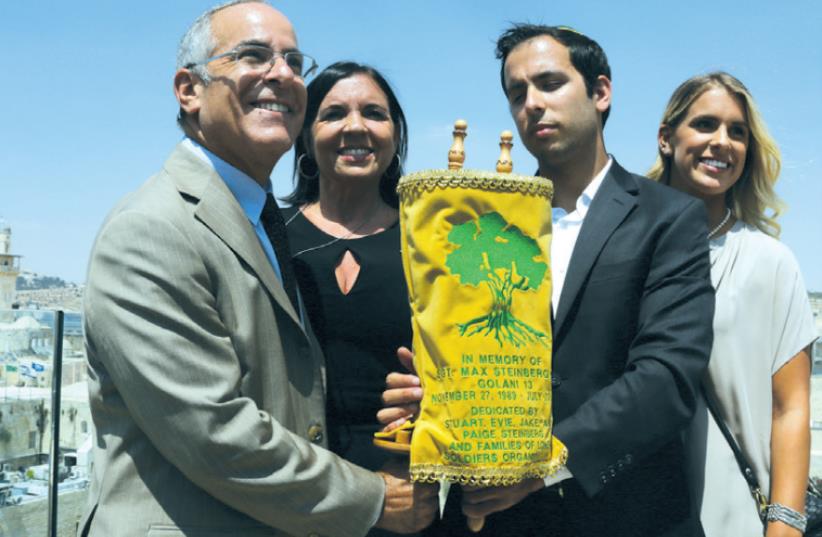 THE FAMILY of St.-Sgt. Max Steinberg poses in Jerusalem’s Old City yesterday with the Torah scroll completed in his memory.
(photo credit: SARAH LEVI)
Advertisement
A year after lone soldier St.- Sgt. Max Steinberg’s death, his family and friends gathered again in the country Max fell in love with – this time to commemorate his service and sacrifice to the State of Israel with the dedication of a Torah scroll.On Sunday afternoon at the Aish Hatorah Center overlooking the Western Wall, Chief Rabbi David Lau, joined by Max’s family, penned the final words of a Torah scroll written in honor of the lone soldier.The Los Angeles native was 24 years old when he was killed last summer in Operation Protective Edge while he was serving as a sharpshooter in the Golani Brigade’s 13th battalion.The Steinbergs were surrounded by dignitaries, friends from their hometown and soldiers from Max’s battalion as Larry Platt, co-founder of the Families of Lone Soldiers organization, blew the shofar – indicating the completion of the Torah scroll.The planning and preparation for the dedication of the Torah scroll have been in the making for several months.Max’s mother, Evie, said the idea for the Torah scroll dedication came from Rabbi Shlomo Riskin, the chief rabbi of Efrat.“It’s an honor, and what better way to have somebody honored than with the holiest item in the Jewish religion,” said Evie. “A Torah is something that can be used that can last forever.”The Steinberg family then worked with Families of Lone Soldiers – an organization dedicated to developing closer ties between the army, government and families of lone soldiers – to follow through with Riskin’s vision. The Michael Levin Lone Soldier Center cosponsored Sunday’s dedication.“Our message today is that Max is not, and will never be, forgotten,” said Platt. “A Torah is an endless piece of life in all of us, his soul will always be with us.”Former Yesh Atid MK Dov Lipman, who’s worked closely with the Steinberg family since Max’s death, said it’s an inspiration to see Max’s parents find something positive amid their grief.The notion of completing a Torah scroll to be used in Israel perpetuates Max’s memory, he said. “It captures the spirit of the Jewish people, how they have the ability to emerge stronger.”The Steinbergs have struggled with the decision whether to commemorate Max in Israel or in the US, Lipman said, but once they landed in Israel and saw what their son fought for, they knew that Max should be commemorated in his new homeland.Former Ambassador to the US and current Kulanu MK Michael Oren echoed Lipman’s thoughts on the Steinbergs’ decision to commemorate Max in Israel.“Max’s sacrifice for the State of Israel is deeply respected by all Israelis. Since Protective Edge, we sought ways to say thank you for those who gave their lives for all of us,” said Oren. “Now, Max belongs to us, and we belong to his memory.”Josh Flaster, director of the Michael Levin Lone Soldier Center, said the Torah scroll in Max’s honor will ideally be used by other soldiers in the army.Evie hopes the future generations who will someday read from Max’s Torah scroll will remember her son as a hero who gave his life for the State of Israel.“Max knew what the risks were, but it was important to him. He didn’t want to live in Israel unless he served in the army like everyone else,” said Evie. “I hope they know he had courage, and he did what he believed in. He was proud to serve the State of Israel.”