Hiking the Israel National Trail gives you a different perspective on life, on the challenges facing us in our little country… and on our history. 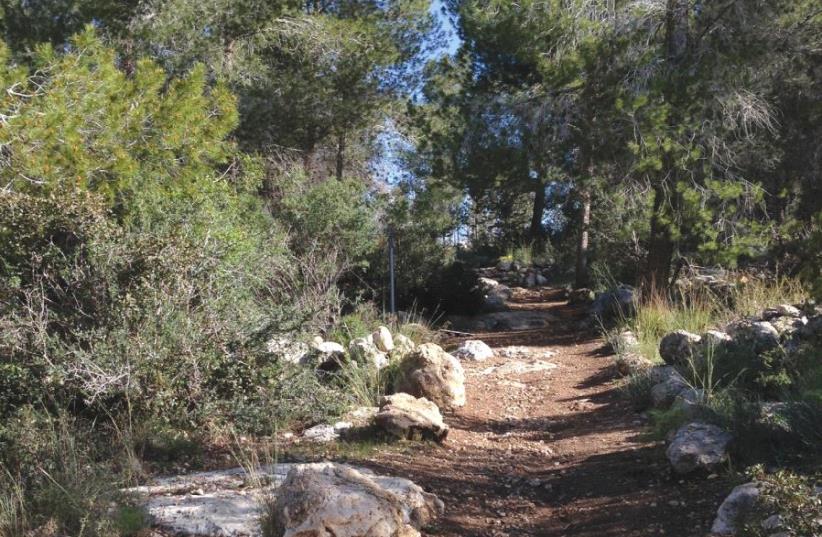 A QUIET forest section of the INT in the Jerusalem foothills between Srigim/Li’on and Tel Azeka, near where David battled Goliath.
(photo credit: ARYEH GREEN)
Advertisement
Trudging through the desert on one of the first days of the journey, a few weeks before Passover 2014, I was struck by the incredibly powerful connection I felt with my people, our history and our land. Like the children of Israel wandering through the desert after the Exodus, I was experiencing an amazing sense of freedom, taking control of my destiny after a period of intense personal hardship.Later on, in the North of the country, camping in the forest of Tzipori, where 2,000 years ago a vibrant community of 30,000 Jews lived and worked and prospered, with Seder night looming, I reflected on a fascinating dichotomy: one which, if not recognized, threatens to undermine our unity and sense of purpose.Most of us see Seder night as a religious experience. Which it is, of course – a celebration of our deliverance at the hand of God from the Egyptian tyrants, a chance to thank God for our freedom and the miracles of the Exodus.Yet unlike Yom Kippur, our day for spiritual reflection and atonement, Passover and Seder night offer an additional, more fundamental element.Seder night, and the entire Passover holiday, is a time to recognize, reflect on and celebrate the forming of our national identity. The sons (and daughter) of Jacob, the Children of Israel, were a family, then a clan, then a tribe and an ethnic or sectoral minority in Egypt. Only with the Exodus did Am Yisrael, the People of Israel, emerge as a distinct people, a nation, imbued with the physical freedom the Exodus provided as well as the spiritual inheritance of Abraham’s moral code.That code – and relationship with the Divine – was then solidified in the giving of the Torah at Mount Sinai. But the religious edicts of our tradition, our Halacha, customs and various spiritual practices and beliefs handed down (and argued over) through the ages, are not what bind us. In fact, disagreements over “religious” issues have too often divided us.As I plodded through the Desert of Tzin, in the Negev, and as I meandered around the ruins of Tzipori, stepping down into a mikve (ritual bath) used by a family two millennia ago and marveling at the tiles of an ancient synagogue, I felt a profound bond with the place and the People of Israel. I know for a fact they practiced their religion differently than I do, however “observant” I may be. But our link – through time and across generations and around the world – transcends our level of observance.Just as Italian-Americans feel an affinity for Italy, or Chinese- or African-Americans for their ancestors’ land and people of origin, we Jews (the people of Judea) or we Israelites (the people of Israel) can and should recognize the ties that bind us, irrespective of our religious (or political) disputes. This is true within our “family”; and it is true in our dealings with others, whether Israel’s neighbors or our political friends and adversaries around the world.This is a unique constellation in human history, combining national identity and religious belief within one construct. We are in the midst of an ideological, intellectual, civilizational struggle – and together we need to reinforce in our children and in our communities the sense of peoplehood that was once assumed and accepted, not only by all Jews but by virtually all the world. We must generate nothing less than a paradigm shift in perception: rejecting the inaccurate but prevalent view of Judaism as just another religion or faith community, and embracing/ promoting Zionism and Israel as expressions of the national liberation movement of the Jewish people/nation.This is not a political statement, and Passover need not be a time of political debate. Irrespective of one’s support for, or opposition to, specific policies of the government of Israel relating to the disputed territories of Judea and Samaria (the “West Bank”) or otherwise, sitting at the Seder table is the optimal time to reassert the legitimacy of the nation-state of Israel.The indigenous people of Israel returned to our ancestral homeland, the Land of Israel, reestablishing our sovereignty in a modern State of Israel.(Linguistically, this was and is axiomatic in Hebrew: Am Yisrael in Eretz Yisrael with Medinat Yisrael (the State of Israel).Had we called it “Judea,” the connection of Jews-as-a-people with this Land might have been clearer to the world using Latin- based languages.) The Jews appeared on the world stage when we emerged from the slavery and suffering in Egypt into the open spaces and silence of the desert, where we were able to enter into our covenant with God to help improve the world with the morality and ethical behavior mandated in the Torah. The next stage in our journey was of course to hike the Trail into our promised land, where we could – and now can continue to – execute that mission.Note that, in Hebrew, the word am (people) is spelled the same as the word im (with). We Jews, the people of Israel, should remain “with” each other, struggling alongside each other, internalizing and transmitting that sense of belonging to the next generation. Our first and primary identity is as a people, as one of the world’s most ancient and revered civilizations, and this Passover is a unique opportunity to regain that sense of self, and that spirit of unity, which is so wonderfully expressed in the Hebrew.Aryeh Green is the author of the forthcoming book My Israel Trail: Finding Peace in the Land of Milk and Honey (www.myisraeltrail.com), a business executive and consultant, a veteran advocate of freedom and democracy in the Middle East, and was a senior adviser to minister Natan Sharansky in the Prime Minister’s Office.