Treat your job 'with a sense of mission,' 22 new judges told 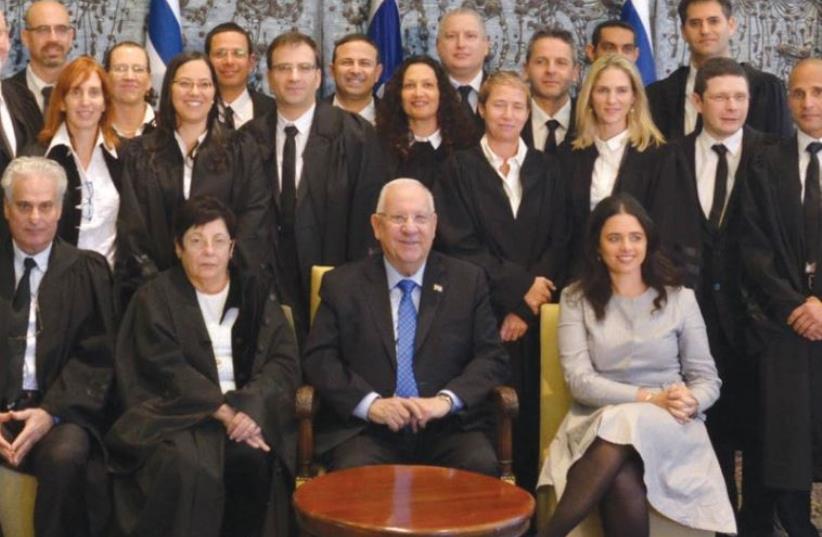 New judges take a group photograph with (bottom row, right to left) Justice Minister Ayelet Shaked, President Reuven Rivlin, Supreme Court President Miriam Naor and National Labor Court President Yigal Plitman
(photo credit: Courtesy)
Advertisement
Twenty-two new judges were installed on Thursday at a ceremony in which President Reuven Rivlin stressed the importance of their mission to keep up public confidence in the system by ensuring that the nation’s courts rule fairly and objectively and with a sense of commitment to the rule of law.Supreme Court President Miriam Naor said she was moved anew each time she heard judges take their pledge.“You have taken a difficult mission upon yourselves,” Naor said.The heavy responsibility of a judge’s robe would accompany them even they were not wearing it, Naor added. “Being a judge is not a job, it’s a way of life. It is not a status of authority but of service – a service to the public who are being judged.”Naor quoted former Deputy President of the Supreme Court Justice (emeritus) Shlomo Levin as having said: “To be a judge is to fill a regular position but to treat it with a sense of mission.”National Labor Court President Yigal Plitman said the pledge summarized the essence of a judge’s work in which justice was the ultimate target in fulfilling the values of a Jewish and democratic state. The pledge is not the same as an oath, as the new judges are not sworn in on a Bible or a Koran.Plitman had a particular message for Carmit Peled and Yafit Zalmonson who were appointed judges in the Tel Aviv Labor Court, and Roi Keret, named to the Jerusalem Labor Court.Plitman spoke of how the Labor Court is seen is seen as a central haven for securing human rights, because its decisions generally deal with ensuring social security, human dignity and the right to a minimal wage, health benefits, respect for workers and their right to unionize and to live in dignity.Justice Minister Ayelet Shaked said judges needed what she called a “listening heart,” such as that shown by King Solomon. In a motherhood dispute between two women, Solomon famously gave the baby they fought over to the woman who protested at his suggestion to cut the child in half, figuring her reaction showed she must be the child’s real mother.