The US president and the first daughter wished Jews across the world a 'Shana Tova u'Metuka.' 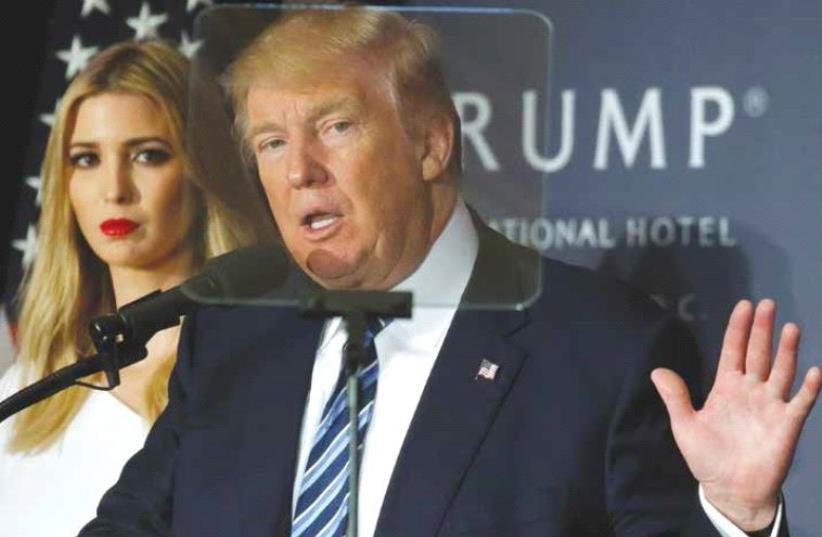 President-elect Donald Trump and his daughter Ivanka attend a campaign event in Washington, DC, in October
(photo credit: REUTERS)
Advertisement
US President Donald Trump took to Twitter on Wednesday evening to extend his warm wishes to Jews in the US, Israel and all over the world in time for Rosh Hashana. "On behalf of all Americans, I want to wish Jewish families many blessings in the New Year," the American president tweeted. In his tweet Trump included a video in which he delivered a warm greeting. "The High Holy Days are a time of both reflection on the past year and hope for renewal in the year to come," the president can be heard saying in the video."Jewish communities across the country and around the world enter into a time of prayer, repentence and re-dedication to the sacred values and traditions that guide the incredible character and spirit of the Jewish people," he continued. The president then stressed America's strong bond with the Jewish state, days after his meeting at the UN General Assembly with Israeli Prime Minister Benjamin Netanyahu. "We reaffirm the unbreakable bond between the United States and Israel," Trump said and added personal wishes from himself and his wife, First Lady Melania Trump. "We ask God to deliver justice, dignity and peace on Earth. Melania and I wish everyone a sweet, healthy and peaceful year which we hope will bring many blessings to all," he concluded.

On behalf of all Americans, I want to wish Jewish families many blessings in the New Year. https://t.co/m4VWxYvONx pic.twitter.com/iYG1G8GaLN
— Donald J. Trump (@realDonaldTrump) September 20, 2017

Trump's daughter Ivanka, who serves as an unpaid senior advisor in her father's administration alongside husband Jared Kushner, also took to social media to join in on the celebrations of the Jewish New Year. Ivanka converted to Judaism upon marrying Kushner, who is an Orthodox Jew that Trump has tasked with brokering a peace deal between Israel and the Palestinians. The pair raise their two daughters according to Jewish values, and Ivanka has shared in the past pictures of the family as they came together to light Shabbat candles or sit around the Seder table on Passover. In a long, moving post she penned and released to her official Facebook and Instagram accounts, the first daughter wrote: "My family and I extend our warmest Shana Tova to all Jews in the United States, Israel, and throughout the world who will welcome the year 5778 this week."
Ivanka also addressed the introspective theme of the holiday, writing that "As we enter this holy season, let us reflect on the joys of the past year and on the many ways that we can continue to contribute to our world." Among the blessings Ivanka wished to bestow was a hope that the new year will "bring an end to terrorism" and that it would "allow us all to treasure even more our bonds of family and friendship." She ended her post with the traditional holiday greeting "Shana Tova uMetuka," i.e. 'a good and sweet year' in Hebrew.