Trade and bilateral agreements signed on “friendly and constructive” visit. 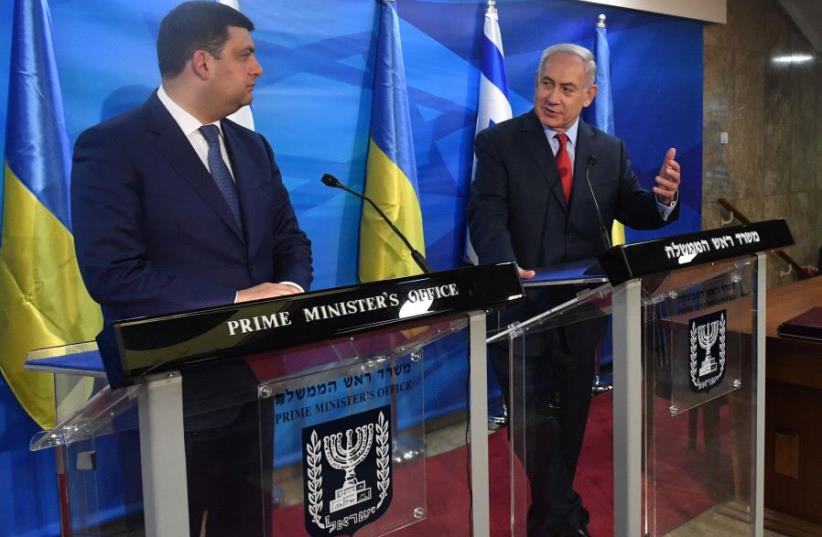 Netanyahu and Ukranian PM Volodymyr Groysman
(photo credit: KOBI GIDEON/GPO)
Advertisement
“Every day they [separatists] fire at us from the temporarily Russian-occupied territories; every day we have 40 to 50 to 100 firings a day from Russian weapons, from Russian tanks, Russian artillery, and innocent people die as a result,” Ukrainian Prime Minister Volodymyr Groysman said in an interview with The Jerusalem Post on Tuesday.Groysman, the first openly Jewish prime minister of Ukraine, is in Israel for a multiday visit that has included meetings with Prime Minister Benjamin Netanyahu, President Reuven Rivlin and various ministers and Knesset members. He stressed the close relations between Kiev and Israel and emphasized that the world should stand on the side of what he termed democratic Ukraine against Russian aggression.At 38, Groysman became the youngest prime minister just over a year ago with the support of the majority of parliament, and he is a close ally of President Petro Poroshenko.Formerly the mayor of Vinnytsia in western Ukraine, he was heralded for developing the city, and, as prime minister, said he has sought to turn around the country’s economic crises and work closely with Western democracies, including the EU and NATO.After Ukraine supported UN Resolution 2334, which condemned Israel’s settlement policies in the West Bank, relations between the two countries appeared strained.Indeed, Netanyahu canceled Groysman’s planned visit in December 2016. But happy days are back again, according to Israel and Groysman. “This is a friendly and constructive visit,” he said.“Yesterday, in the presence of [Netanyahu], we signed several bilateral agreements, including healthcare, employment, customs and finalizing work on the freetrade area agreement. The first months of 2017 saw increased trade turnover between our countries,” he added.He doesn’t see Israel-Ukraine relations as having suffered a decline in December, but argued that “every country has its national interests” and stated that “Israel is an absolute friend of Ukraine with a common history.”There are not only many Israeli citizens with origins in Ukraine, but the countries have a strong strategic partnership.Israel also has warm relations with Russia, which have deepened in recent years as the two seek to reach an understanding about the Syrian conflict. “We don’t interfere in relations with other countries; we respect sovereignty of other states,” said Groysman.But the Ukrainians have been fighting a tough conflict over the last three years in eastern Ukraine against separatists, and accuses Russia of being an aggressor.“I don’t want to say anything toward the Russian people, but I speak about the Russian government. I think this position is clear and close to Israel,” Groysman stated.Israel has experience, like Ukraine, of having its territory under shelling and suffering pain and tragedy, he said.Groysman is optimistic that “Israel will never support an aggressor and terrorist, so you should be careful in relations with third countries, especially when these countries are inclined toward aggression.”This is a thinly veiled reference to the accusations against Russian actions in eastern Ukraine, which he asserted include the use of economic, energy, information and cyber attacks in the conflict. “It is a fight between two worlds: [the] democratic world defending its values, and another world which has no respect for international law, democracy or the territorial integrity of other states,” he said.Ukraine also hopes that US President Donald Trump, who is visiting Israel and the region soon, will stand by Kiev. “He is president of America, a superpower and world leader, and I am certain he will defend values and democracy and will fight for these values, and this equals support for Ukraine,” he added.