In 2016 country voted for Security Council resolution that said Kotel is ‘occupied’ territory. 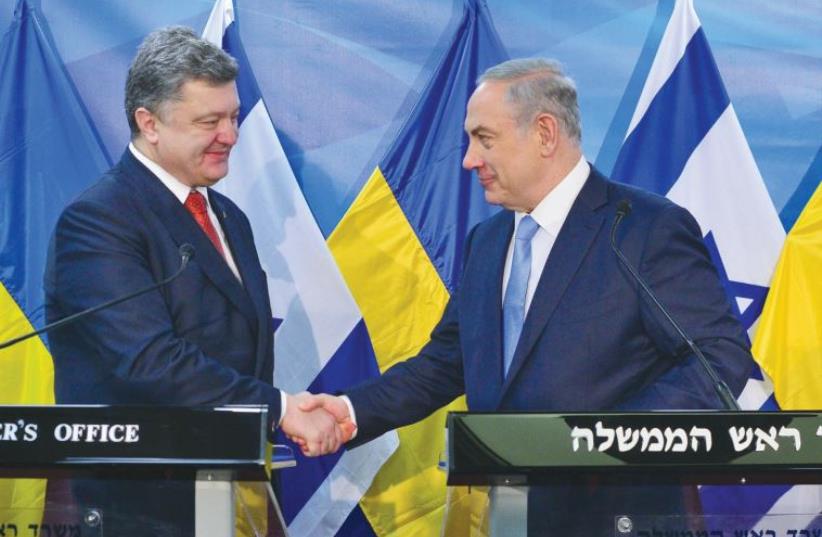 PRIME MINISTER Benjamin Netanyahu greets Ukrainian President Petro Poroshenko in Jerusalem
(photo credit: KOBI GIDON / GPO)
Advertisement
Just over two years after Ukraine infuriated Israel by supporting an anti-settlement resolution in the UN Security Council that stated that Israel’s control of east Jerusalem violates international law, Ukrainian President Petro Poroshenko is scheduled to visit the Western Wall, located in east Jerusalem, during his visit on Monday.Poroshenko will be the latest in a growing number of world leaders who – following US President Donald Trump’s landmark visit there in May 2017 – have added a visit to the site as part of their itinerary during their trip to Israel.In December 2016, Ukraine was one of the 14 UN Security Council members who voted in favor of UNSC Resolution 2334, a resolution that passed in the waning days of President Barack Obama’s tenure because the US abstained, rather than vetoed, the measure.That resolution reaffirmed that “the establishment by Israel of settlements in the Palestinian territory occupied since 1967, including East Jerusalem, has no legal validity and constitutes a flagrant violation under international law and a major obstacle to the achievement of the two-State solution and a just, lasting and comprehensive peace.”The resolution also “underlines that it will not recognize any changes to the 4 June 1967 lines, including with regard to Jerusalem, other than those agreed by the parties through negotiations.”At the time of the passage of that resolution, Prime Minister Benjamin Netanyahu said that it is “distorted” and “states that the Jewish quarter [in the Old City] and the Western Wall are occupied, which is absurd.”Following Ukraine’s vote in favor of the resolution, Israel expressed its displeasure by canceling a scheduled visit by Prime Minister Volodymyr Groysman, and summoned a representative from the Ukrainian Embassy in Israel to protest.Six months later, however, Groysman came to Israel for his visit, signaling that the spat was in the past, and that the two countries had mended their ties.In December 2018, Israel – which had painstakingly sat on the fence for years regarding the Russia-Ukraine crisis – took a stand on behalf of Ukraine at the UN, voting against Moscow in a resolution condemning Russia’s Ukraine policies.Poroshenko will not be the first Ukrainian high-level official to visit the Western Wall. In fact, after the US, there have been more senior Ukrainian visitors to the site over the last two years than any other country. This includes the country’s prime minister, foreign minister, parliamentary delegation and the mayor of Berdychiv.Poroshenko is also scheduled to visit the Church of the Holy Sepulchre in the Old City. It is not immediately clear whether he will be accompanied to the Western Wall by foreign ministry officials.Since Trump’s visit to the Western Wall during his trip in May 2017, five presidents, two vice presidents, five prime ministers, six foreign ministers, Austrian Chancellor Sebastian Kurz – and his successor Christian Kern – have all visited the site.Poroshenko will also not be the only senior official of one of the countries who voted for UNSC 2334 to visit the site. New Zealand’s Governor-General Dame Patsy Reddy visited in October 2017. Israel recalled its ambassador from New Zealand for a number of months after the Security Council vote, because New Zealand was a co-sponsor of the resolution.Poroshenko is scheduled to arrive for a 28-hour visit on Sunday afternoon. In addition to visiting the Western Wall, he is also scheduled to go to Yad Vashem, meet with Netanyahu, President Reuven Rivlin, Knesset Speaker Yuli Edelstein, and Jerusalem Affairs Minister Ze’ev Elkin. He is not scheduled to meet with opposition head Shelly Yacimovich.