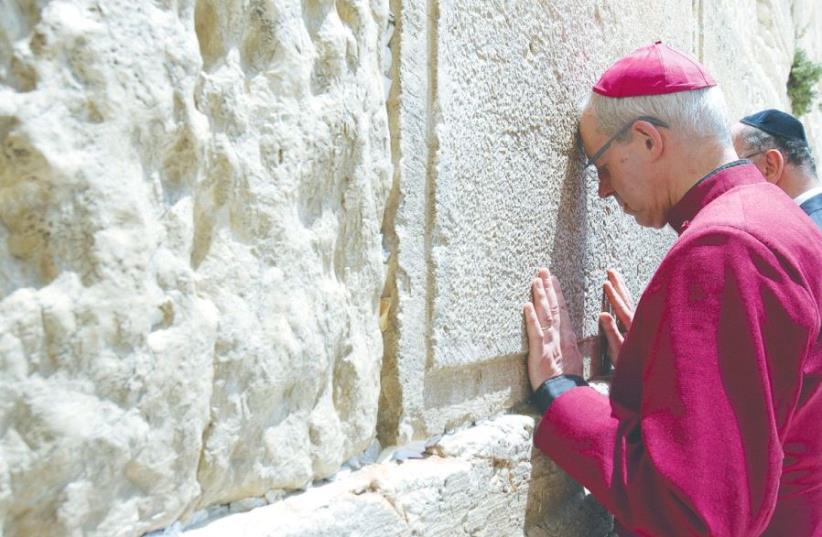 ARCHBISHOP OF CANTERBURY Justin Welby prays at the Western Wall.
(photo credit: MARC ISRAEL SELLEM/THE JERUSALEM POST)
Advertisement
A day after UNESCO voted to deny Israeli sovereignty in Jerusalem, UK Chief Rabbi Ephraim Mirvis and Archbishop of Canterbury Justin Welby on Wednesday saluted the historic Jewish connection to the city, after praying side by side at the Western Wall.While both men declined to comment directly on the vote – Welby said he had not followed the UNESCO discussion – both affirmed the centrality of the city to the Jewish people.
PM Netanyahu reacting to UNESCO resolution (credit: REUTERS)
“The Temple Mount is the site of a historic temple and that is the very heart of the people of Israel over many, many centuries, millennia in fact,” Welby told reporters at the Western Wall Plaza.Mirvis had earlier shown Welby the house where he and his wife used to live in the Jewish Quarter of the Old City, noting that Hezekiah’s Wall was discovered underneath his old apartment block.“What you can see today is layers of history taking us all the way back through time, seeing the Jewish presence in the city, as a symbol of the centrality of Jerusalem to the Jewish nation,” Mirvis said.The rabbi told The Jerusalem Post that Jerusalem is no stranger to controversy.“For millennia Jerusalem has been a place of dispute,” he said, mentioning the numerous names the city has borne through history. “We recognize the ongoing presence of the Jewish people and our eternal right to the city. It’s the spiritual capital of the Jewish people and we’re going through another episode of dispute.”He added that he was looking forward to returning to the city to celebrate Jerusalem Day on May 24. “I’m not going to miss out on 50 years of celebration of that most remarkable day. I’m old enough to remember it as a child when I heard that Jerusalem was back in our hands again; Jerusalem is central to everything we believe in...”Welby’s visit to Israel followed one to Jordan as part of a 10-day tour of the Middle East, where he met with Iraqi Christian refugees.“It’s a pilgrimage to these lands and to my enormous pleasure and overwhelming gratitude the chief rabbi very kindly and generously said he would come here today so we could each engage in our own private prayers at the wall,” Welby told the Post.Later in the day the pair visited Yad Vashem, where Welby spoke of the great contribution of the Jews to society throughout history, and the “mysterious” roots of antisemitism.“You would have thought we would rise up together in gratitude [to the Jewish communities], and yet even in the last year, we see uncovered afresh that sense of antisemitism,” he said, stressing the need to invest in expelling the phenomenon from society.Mirvis said in a statement: “The archbishop of Canterbury’s presence here in Jerusalem and his prayers for peace and reconciliation, particularly at Yad Vashem and the Western Wall, are indicative of historic, positive developments in the Anglican-Jewish relationship.“I would so love to send a message of hope back through the annals of history – to Clifford’s Tower in York, to the medieval communities who endured the scourge of the blood libel and to those whose lives were devastated by the Crusades – to let them know that a chief rabbi and an archbishop of Canterbury would one day pray alongside one another, as close friends, in the holy city of Jerusalem.“That the archbishop would make time, in what is an exceptionally busy schedule, to see the State of Israel as I see it – [as] a priceless, divine gift, which brought deliverance to the Jewish world after centuries of prayer and yearning – is a testament to the high regard in which he holds the Jewish community.”Later in the day, Mirvis introduced Welby to Ashkenazi Chief Rabbi David Lau and Sephardi Chief Rabbi Yitzhak Yosef, in a bid to further cultivate Jewish- Anglican ties.The pair met with friends of British terrorism victim Hannah Bladon at the Hebrew University, where she was studying before she was killed last month in an attack on the Jerusalem Light Rail.