The UN Secretary-General reportedly spoke to Livni over the weekend and suggested to nominate her for a senior position. Livni has declined to comment. 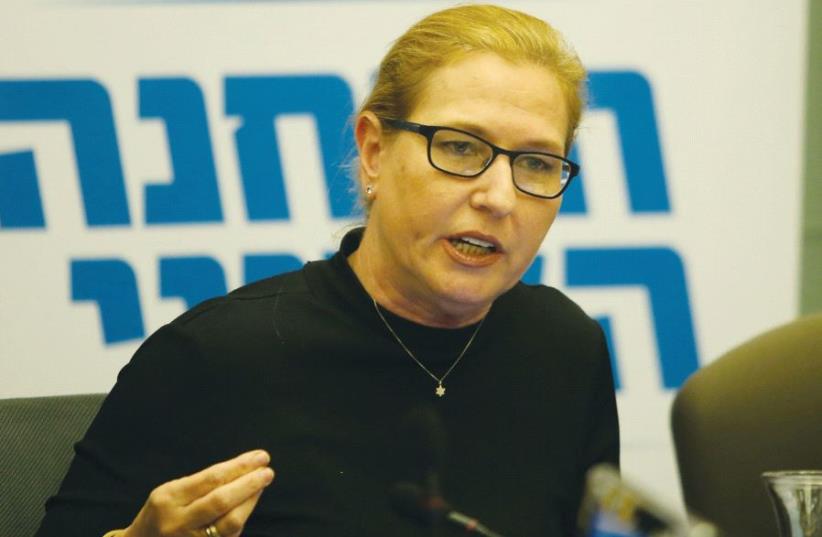 Tzipi Livni
(photo credit: MARC ISRAEL SELLEM)
Advertisement
Zionist Union MK Tzipi Livni received a call from UN Secretary-General Antonio Guterres’s office over the weekend telling the former justice minister she is being considered for the position of under secretary-general.Livni’s associates called it a “preliminary check” and stressed that no offer had been made.Livni met with Guterres two weeks ago at his office in New York. She firmly denied at the time that she and Guterres spoke about a posting.
US ambassador to UN Haley objects to ex Palestinian Authority PM Fayyad leading UN mission to Libya
Her associates continued to deny on Sunday that there were any personal issues regarding the employment for Livni discussed or hinted at in their talk two weeks ago.Livni’s associates joined Guterres’s spokesman in denying any connection between the possible job for Livni and the question of whether former Palestinian Authority prime minister Salam Fayyad would be appointed the UN’s envoy to Libya.“Reports of Tzipi and Fayyad being part of a deal are nonsense,” said a source close to Livni.Sources also said Livni’s potential nomination would not require official approval from the Israeli government or Prime Minister Benjamin Netanyahu, unlike UN envoys, who requires the confirmation of the Security Council.Speaking during the cabinet meeting on Sunday, Netanyahu addressed the possible nomination of Fayyad by calling for the UN to be more even-handed.“Several days ago, I was informed of the possibility of the appointment of Salaam Fayyad to a UN position,” he said. “I said that the time has come for reciprocity in the UN’s relations with Israel, and free gifts cannot be constantly given to the Palestinian side.”Netanyahu went on to say: “The time has come for positions and appointments to be made to the Israeli side as well. Should there be an appropriate appointment, we will consider it.”At the cabinet meeting, Culture and Sports Minister Miri Regev (Likud) questioned whether Livni was fit for the post.But Deputy Minister Michael Oren (Kulanu) said that even though he does not agree with Livni on everything, her diplomatic experience made her fit for the position. Justice Minister Ayelet Shaked (Bayit Yehudi).Bayit Yehudi MK Bezalel Smotrich, and Transportation Minister Israel Katz (Likud) all spoke in favor of her receiving the post.The United States on Friday blocked Guterres’s choice of Fayyad as the body’s representative to Libya.“The United States was disappointed to see a letter indicating the intention to appoint the former Palestinian Authority prime minister to lead the UN Mission in Libya,” Nikki Haley, US Ambassador to the UN, said in a statement.“For too long, the UN has been unfairly biased in favor of the Palestinian Authority to the detriment of our allies in Israel,” she said.Haley added that the United States “does not currently recognize a Palestinian state or support the signal this appointment would send within the United Nations.”The PLO released a statement condemning Haley for the move, calling it “blatant discrimination on the basis of national identity.”“It defies logic that the appointment of the most qualified candidate is blocked because it is perceived as detrimental to Israel. It constitutes a blanket license for the exclusion of Palestinians everywhere.”The statement also expressed hope that the US would “take back” the decision and instead work to “block petty acts of bigotry and vindictiveness and the further victimization of the Palestinian people for the mere fact of their existence.”The US envoy said Washington encourages Israel and the Palestinians “to come together directly on a solution” to end their conflict.Reuters contributed to this report.