The victims include a well-known Netanya underworld figure who survived a number of attempts on his life in the past.

Burnt vehicle in underworld car bombing in Rishon Lezion
Advertisement
Three men were badly hurt – including one listed in critical condition – after their car exploded in what police suspect was an attempted underworld hit in Rishon Lezion on Monday afternoon.The victims include Baruch Bokal, a well-known Netanya underworld figure who has survived a number of attempts on his life in the past. The other two men were named as cousins Gabi and Baruch Falah, both also from Netanya.Bokal incurred serious injuries, while Gabi was taken from the scene in critical condition and Baruch was moderately wounded in the blast.Central District spokesman Ch.-Supt. Ami Ben-David said at the scene on Monday,“ Around 12:20 p.m. police received a call about an explosion on Peres street in Rishon Lezion. Police arrived at the scene and closed off the area and during their initial examination found that the explosion was caused by a bomb that was in the car.”Ben-David said police had still not determined if the bomb was attached to the vehicle by a would-be assassin or if the three victims were transporting it when it blew up prematurely, what is commonly referred to as a “work accident.” Ben-David added that the three men were visiting Rishon Lezion on Monday and were heading back north towards Netanya when the bomb exploded. Police suspect that the bomb was placed in the vehicle before they went to the city. 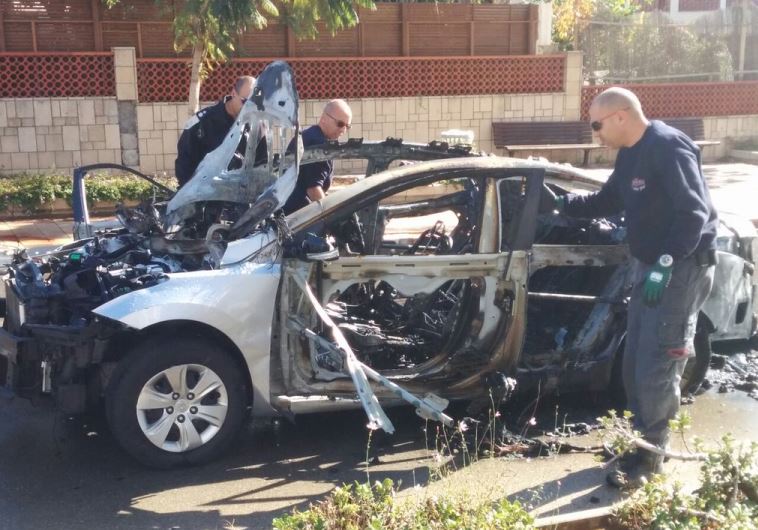 Car blown up in criminal bombing in Rishon Lezion (photo credit: ISRAEL POLICE).Magen David Adom paramedic service said the wounded were found outside the vehicle, with two of them conscious and suffering from serious wounds to their extremities.They said a third victim was moderately wounded and found lying on the pavement near the car.The bombing took place on Shimon Peres Street in the city’s Nobel Prize neighborhood, close to the College of Management Academic Studies.The incident is believed to be linked to an underworld dispute in the Sharon region, but police said Monday the investigation has only begun.Bokal has survived a number of attempts on his life in the past, including one last October when a bomb was detonated inside his car, killing an associate of his. Bokal, believed to be the target, was not in the vehicle at the time.An August attempt on his life in Netanya was caught on video. In that incident, Bokal was riding his scooter when he was hit by a car and knocked to the pavement. He then fought with his attacker, wrestling a pistol from his hand and forcing him to flee. In October, two men, Maor Malul and Ran Shabah, were indicted for attempted murder for the attack.Also in October, Baruch’s brother Eyal survived an attempt on his life, when a bomb exploded on his motorcycle in Netanya.