Bin Zayed’s interest in meeting Rosenberg is part of a trend among Arab leaders who are seeking for ways to grow close to US President Donald Trump. 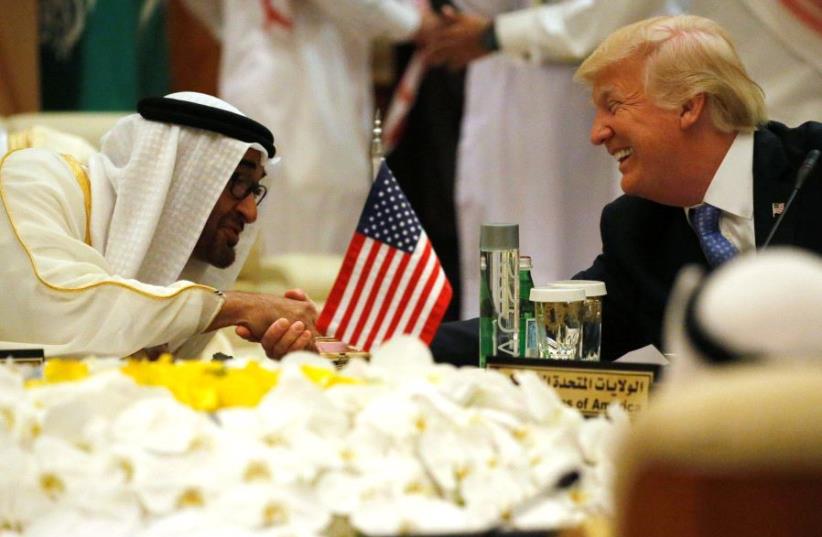 US President Donald Trump shakes hands with Abu Dhabi Crown Prince and Deputy Supreme Commander of the United Arab Emirates Armed Forces Mohammed bin Zayed al-Nahayan as he sits down to a meeting with of Gulf Cooperation Council leaders during their summit in Riyadh, Saudi Arabia
(photo credit: JONATHAN ERNST / REUTERS)
Advertisement
In another sign of growing ties between Israel and the Gulf, Mohammed Bin Zayed, the Crown Prince of Abu Dhabi, hosted a delegation of Evangelical Christians on Monday led by a prominent pro-Israel advocate who also lives in the Jewish state.

It was the first meeting of its kind for Bin Zayed who is also the deputy supreme commander of the United Arab Emirates’ armed forces.The delegation was led by Joel Rosenberg, a well-known Evangelical activist and author who lives in Israel. The meeting, initially scheduled for 30 minutes lasted two hours.  Bin Zayed’s interest in meeting Rosenberg is part of a trend among Arab leaders who are seeking for ways to grow close to US President Donald Trump and believe the key might be through Evangelical Christians, a demographic overwhelmingly Republican and supportive of the current administration. Last year, Rosenberg led a similar delegation to Cairo where the group met with Egyptian President Abdel Fattah al-Sisi.Rosenberg’s visit to Abu Dhabi comes amid a warming of ties between Israel and moderate Sunni Arab states in the Persian Gulf. On Friday, Prime Minister Benjamin Netanyahu visited Oman. Sport and Culture Minister Miri Regev has been in Abu Dhabi as well for the last few days attending a Judo tournament, visited the emirate’s largest mosque on Monday.The Emirati news agency Wam issued a statement saying that Bin Zayed “doubled on the importance of inculcating the values of cultural and religious pluralism and forgiveness between followers of different religions as an essential tool to uproot the scourge of terrorism, extremism, fanaticism and hatred.”