UNSC rejects Israeli jurisdiction on Golan as 'null and void'

A number of Security Council members had already criticized Netanyahu’s statement last week, which he made when the cabinet held its weekly meeting on the Golan Heights. 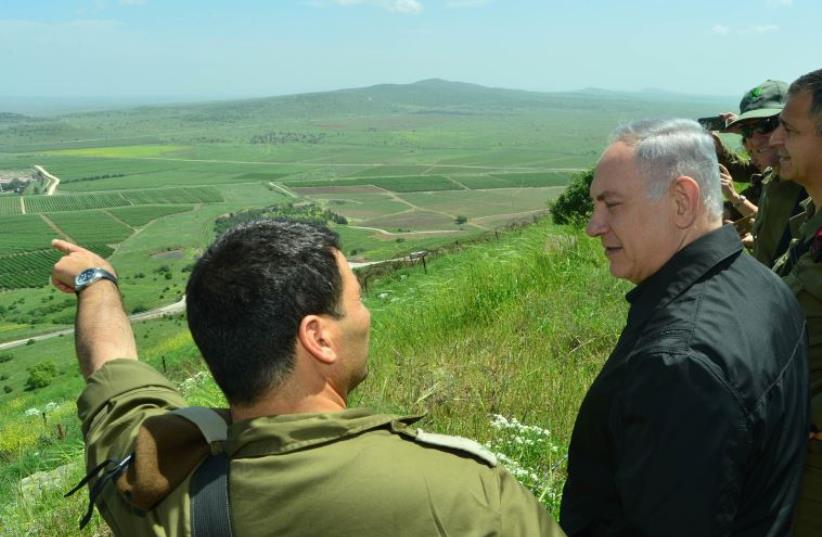 Netanyahu visits IDF drill in Golan Heights
(photo credit: KOBI GIDEON/GPO)
Advertisement
The UN Security Council rejected on Tuesday last week’s statement by Prime Minister Benjamin Netanyahu that the Golan Heights would always remain under Israeli sovereignty.Israel captured the Golan Heights from Syria during the 1967 Six Day War. In 1981 it extended Israeli law to the region, thereby de facto annexing it. The international community does not recognize the annexation.On Tuesday, the Security Council in New York held a discussion on the matter and reiterated that position, which it adopted in Resolution 497, passed in 1981.“The members recall Resolution 497 [which] decided that the Israeli decision to impose its laws, jurisdiction and administration in the occupied Syrian Golan Heights is null and void and without international legal effect,” the council said on Tuesday.The meeting was held at the request of Venezuela, which currently is one of the 15 nations that comprise the Security Council. According to the Israeli delegation at the UN, Egypt was involved in the request as well.A number of Security Council members had already criticized Netanyahu’s statement last week, which he made when the cabinet held its weekly meeting on the Golan Heights.At the time, Netanyahu said, “The time has come, after 50 years, for the international community to finally recognize that the Golan Heights will remain forever under Israeli sovereignty.”China’s UN Ambassador Liu Jieyi, president of the Security Council this month, told reporters after a closed-door meeting that “council members expressed their deep concern over recent Israeli statements about the Golan, and stressed that the status of the Golan remains unchanged.”Liu said the council supports a negotiated arrangement to settle the issue of the Golan.

Herb Keinon and Reuters contributed to this report.
Advertisement
Subscribe for our daily newsletter