Uruguayan son of key proponent of partition plan: ‘My father would have been proud’

Daniel Rodriguez Otezia is visiting Israel on a 10-day trip to mark the 70th anniversary of the UN's passing of the partition plan. 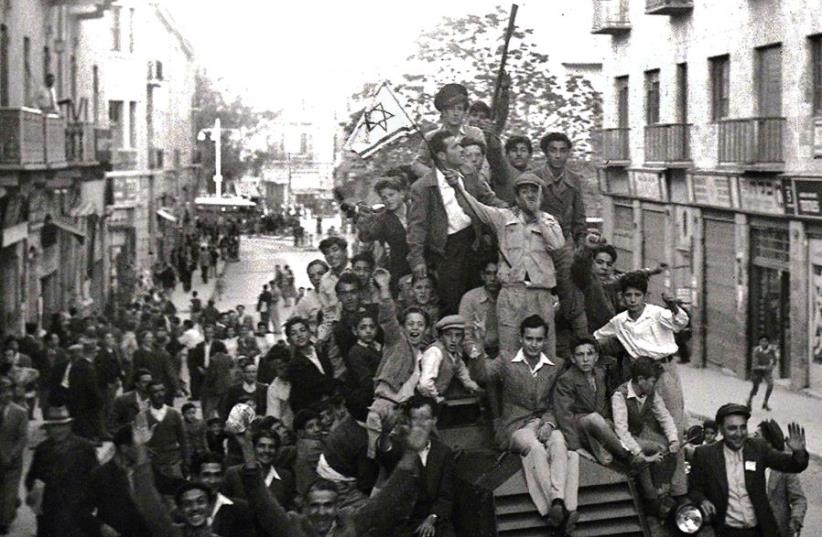 JEWS CELEBRATING the Partition Plan in 1947 in Jerusalem. ‘The UN General Assembly’s 1947 Partition Plan, which triggered the war, similarly injected pathological perspectives into our national identity,’ writes the author
(photo credit: REUTERS)
Advertisement
Daniel Rodriguez Otezia, the managing editor of Uruguay’s leading newspaper El Pais, heard a lot growing up about November 29, 1947, and United Nations Resolution 181, which passed that day and paved the way for the creation of Israel.The reason: His father, Enrique Rodríguez Fabregat, was the Uruguayan envoy to the UN in 1947 who not only cast his country’s vote in favor of partition, but also – as a member of the UN Special Committee on Palestine team that recommended partition – convinced other states to do so, as well.Rodriguez, in the country this week as part of a 10-person Uruguayan delegation sponsored by the Foreign Ministry and Jerusalem Affairs Ministry, told The Jerusalem Post that his father told the story often.“My father was a proponent and drafted the partition plan because he thought the best solution was the creation of a Jewish state, and also a Palestinian state,” he said. “He thought that any other solution would put the Jewish people at the hands of the Arabs, who would be a majority in the region.”Rodriguez said his father, who visited the displaced persons camps in Europe after the Holocaust, insisted that the Jews of Europe be allowed to come to Israel. He was greatly impressed that when he went to those camps, the people – “in deplorable conditions” – said they “wanted to go to Israel, that they wanted to go to their land.”“He said that, even though the Jewish people were dispersed around the world, they kept their unity as a people,” added Rodriguez, who is on his second trip to Israel – the first having been 10-years ago on the 60th anniversary of the Partition Plan. “He said they have a 4,000-year history in the region and that they are not new here.”When the elder Rodriguez died in 1976, an obituary in The New York Times called him a “former delegate to the United Nations who played a leading role in setting up the State of Israel in 1948.”The report said that in 1947, when the UN was considering the question of the future of Palestine, he advocated three general principles: “The ‘necessity for the Jewish people to have a state as a haven against persecution; the ‘necessity’ for immediately ending the British mandate by establishing Arab and Zionist states, and self-determination by plebiscites in each state within 10 years on continuing its status or joining the other.”In 1962, when Rodriguez left New York to become his country’s ambassador to Austria, the JTA reported that he was heralded at a meeting of the United Zionist-Revisionists of America as “an old and steadfast friend” of Israel.According to that report, during his address to the gathering, Rodriguez said he was first attracted to the lot of Jews when, as a child, his father read to him accounts about the Dreyfus Case in France.The younger Rodriguez told the Post that his father, who was a distinguished professor of Spanish literature in the US before becoming Uruguay’s ambassador to the UN in 1946, had such a grasp of Jewish history that when a Jewish Agency official went to him to lobby on behalf of the Jewish state, “he didn’t have to explain anything to him, he knew the whole history of the Jewish people.”Rodriguez said his father, who has a street named after him in Ramat Gan, was “absolutely proud” of the role he played in Israel’s founding.At the final speech that he gave to the UN before leaving to become ambassador to Austria, the elder Rodriguez stated that the UN vote in favor of Resolution 181 and for partition “will be the most important moral resolution the UN will take in its history, because it recognizes the right of a people to live where they should.”According to Rodriguez, his father always regretted that only half the resolution was implemented and that a Palestinian state was not created at the time, as the plan proposed.He blamed this on “the Arab stance not to have a Palestinian state, because they didn’t want a Jewish state to exist.”Rodriguez said his father “never changed his mind whatsoever, and always said this was the right thing to do.” He remembered his father saying that the thing he valued most about Israel was that it “managed in a region that is hostile and dangerous to be the only democracy in that part of the world.”Had he seen Israel today, Rodriguez said, his father “would have been proud and amazed at what you have done, and that he contributed to making a great country like you have.“You have a lot of problems, of course, every country does, but you have achieved a lot, both in the economic sense and in preserving democracy in a difficult region in the world.He would be truly amazed and proud of that.”