Chairman of Joint Chiefs of Staff Gen.Joseph Dunford said to be in country to discuss Russia's presence in Syria and ISIS activities in Egypt. 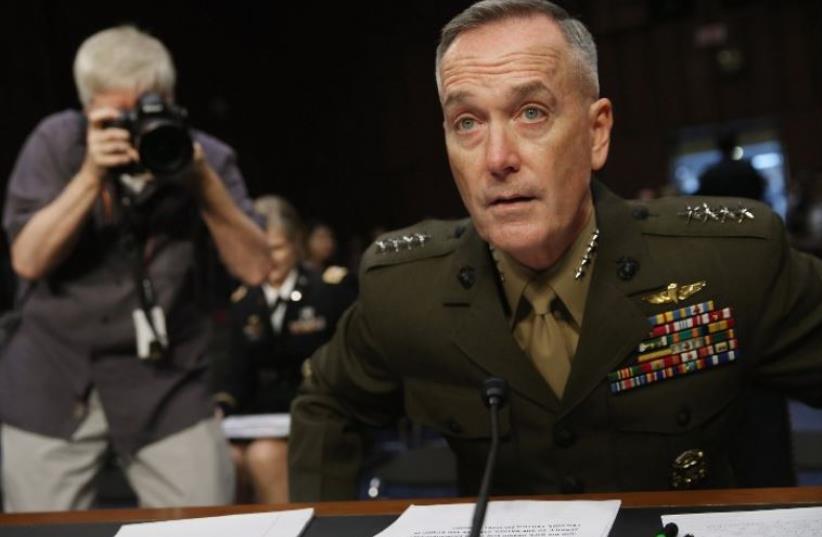 Commandant of the US Marine Corps General Joseph Dunford Jr., the chairman of the US Joint Chiefs of Staff
(photo credit: AFP PHOTO)
Advertisement
US Chairman of the Joint Chiefs of Staff Gen. Joseph Dunford landed in Israel on Monday as a guest of IDF Chief of Staff Lt.-Gen. Gadi Eisenkot.During the visit, Dunford is scheduled to meet with Prime Minister Benjamin Netanyahu, Defense Minister Avigdor Liberman, IDF Chief of Staff Gadi Eizenkot and additional IDF commanders to discuss cooperation between the two allied armies and mutual security challenges.It will be Dunford’s third visit to Israel as chairman of the joint chiefs of staff and fourth meeting with Eisenkot who he awarded the Legion of Merit for “exceptionally meritorious service” in August 2016.Dunford will be greeting by an official Honor Guard at the Kirya (military headquarters) in Tel Aviv on Tuesday.According to Ynet news, during the meetings with Eisenkot and Liberman, Dunford will discuss Russia and the ongoing war in Syria, including the remaining chemical weapons which remain in the regime’s hands, as well as fighting in the Sinai Peninsula and the continuing attempts to transfer advanced weapons to Hezbollah.There have been several high-ranking military officials who have visited Israel in past months.In April, US Secretary of Defense James Mattis came to Israel on his first official visit as Pentagon chief and stated that the MOU signed between the two allies showcases Washington’s “absolute and unwavering commitment to Israel’s security and to its qualitative edge over Iran or other threats.”“I believe in Israel’s security.Whatever it takes to keep Israel secure is where we stand and where we will always stand as Americans,” he added.In March US Army’s European Command, Gen. Curtis Scaparrotti visited Israel and toured the country’s Arrow missile interception system at the Palmahim air base in central Israel accompanied by Eizenkot and Air Defense Commander Brig.-Gen. Zvika Haimovitch. Scaparrotti, who was in Israel for his second time, underscored the strong and enduring military partnership between Israel and the United States, saying that “it was built on trust developed over decades of close cooperation,” emphasizing the US commitment to maintaining Israel’s qualitative military edge in the region.During his two visits to Israel as the head of the US Army’s European Command, Scaparrotti visited both the Syrian border on the Golan Heights as well as the Gaza border, where he toured a Hamas tunnel.US President Donald Trump is set to make his first official visit to Israel on May 22. It will be his first trip as president outside the United States.