US lawmaker took to the Senate floor on Jerusalem Day to call on President Trump to make good on his campaign pledge and move the US embassy to Jerusalem. 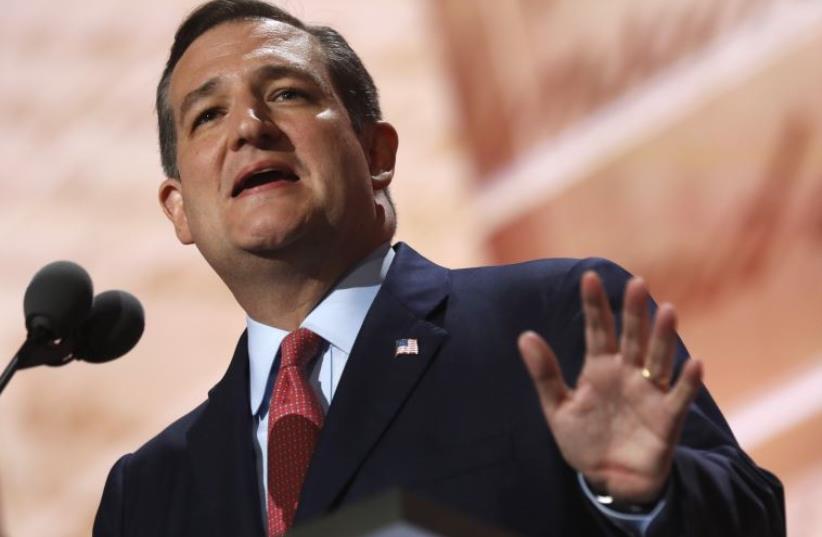 Former Republican U.S. presidential candidate Senator Ted Cruz speaks during the third night of the Republican National Convention in Cleveland, Ohio, July 20, 2016
(photo credit: REUTERS)
Advertisement
US Senator and former Republican presidential candidate Sen. Ted Cruz (R-Texas) took to the Senate floor on Wednesday to speak about the importance of commemorating the reunification of Jerusalem on the 50th anniversary of the day Israel liberated the city’s east during the Six Day War.Cruz’s address came a day after US President Donald Trump departed from Israel, where he spent two days of his maiden foreign tour and visited the Western Wall.“I rise to mark a truly significant and momentous day. Starting this evening, millions around the world will celebrate Yom Yerushalayim, also known as Jerusalem Day,” Cruz said.
Sen. Cruz gives speech on senate floor commemorating Jerusalem Day (credit: YOUTUBE)
“I am proud to join our close ally Israel and the Jewish people in celebrating this historic, 50th anniversary of the reunification of Jerusalem,” he continued.Cruz then referred to Trump, calling on him to make two significant moves Israel has been vying for in talks with the current administration and its predecessors: to move the US Embassy from Tel Aviv to Jerusalem, and to recognize Jerusalem as Israel’s capital.“It is long past time that America does something it should have done two decades ago: move the American embassy to Jerusalem and formally recognize Jerusalem as Israel’s eternal and undivided capital,” he said.Trump first made the pledge to move the embassy during his election campaign, and has since appeared to be wavering on the decision.A US official told The Jerusalem Post ahead of the president’s visit to the region that Trump would hold off on making the decision and was not going to announce the embassy move during his stay.Indeed, during his time in the country, Trump refrained from making a direct reference to settlement construction or to the embassy move, which are two of the major issues of contention between Israel and the United States.“There is no reason Israel should be treated any worse when they are such a reliable and unshakable ally,” Cruz added, before stressing the significance of the embassy move once more.“We should honor the promise that Democratic presidents and Republican presidents have made for decades and move our embassy to Jerusalem.”Cruz then went on to note the importance of Jerusalem Day. He spoke about Israel’s battle to reunite the capital during the Six Day War, which was determined on this day 50 year ago.“Today is a day where we must also reassert historical truth: The historic connection of the Jewish people to Jerusalem and the Land of Israel did not begin in 1967,” he said. “These profound ties to Jerusalem have existed for thousands of years. They can be traced back and have been reaffirmed through numerous archeological excavations such as those in the City of David.“And so I stand today to express my solidarity with Israel and with the Jewish people during this major celebration. Now, more than ever, America stands strong with our unshakable friend and ally, the nation of Israel.”