The two leaders' last meeting came on the sidelines of the World Economic Forum in Davos, Switzerland in January. 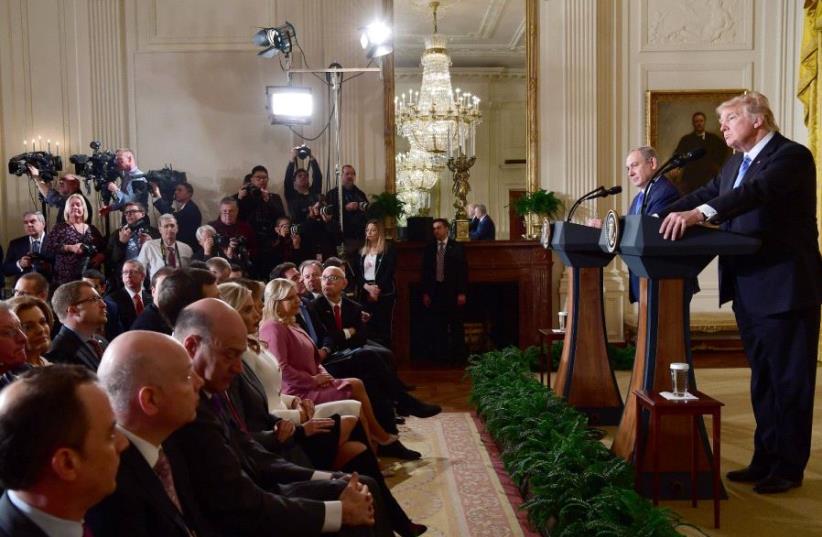 Benjamin Netanyahu and Donald Trump give press conference at the White House in Washington on Feb. 15, 2017
(photo credit: AVI OHAYON - GPO)
Advertisement
WASHINGTON - US President Donald Trump will host Israeli Prime Minister Benjamin Netanyahu for a meeting at the White House on March 5, two US officials said on Friday."The president has a great relationship with the prime minister and looks forward to meeting with him," a White House official said.The meeting will be the fifth between Trump and Netanyahu since Trump took office in January 2017 and comes as Netanyahu faces a legal firestorm at home.The leaders have twice met at the White House, in February and May 2017. The two leaders' last meeting came on the sidelines of the World Economic Forum in Davos, Switzerland in January.Following their Davos meeting, Trump threatened to withhold aid to the Palestinians if they did not pursue peace with Israel, saying they had snubbed the United States by not meeting Vice President Mike Pence during a recent visit.Speaking in Davos, Netanyahu said only the United States could broker a peace deal."I think there's no substitute for the United States. As the honest broker, as a facilitator, there's no other international body that would do it," Netanyahu said.Trump said Palestinians had to come to the negotiating table."Because I can tell you that Israel does want to make peace and they're going to have to want to make peace too or we're going to have nothing to do with them any longer," Trump said.Netanyahu praised the Trump administration's "rock solid support" at the United Nations following the backlash regarding Trump's recognition of Jerusalem as the capital of Israel.