Using the power of Israeli backpackers to help the world

“The idea was to use the backpackers as the infrastructure for people to do ‘blue-and-white’ humanitarian work to show the real Israel to the world.” 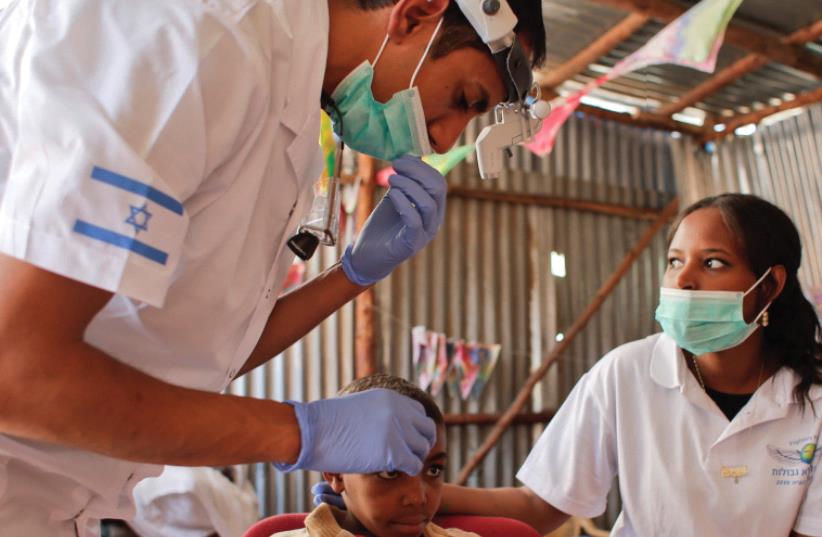 Fighters for Life volunteers are seen at a makeshift medical clinic in Ethiopia
(photo credit: FIGHTERS FOR LIFE)
Advertisement
Each year some 40,000 Israeli youngsters – about 85% of them fresh out of the IDF – get inoculated against exotic diseases, buy a pair of boots, strap a pack on their backs and head for the hills of South America, Africa and the Far East.In 2013, Gili Cohen, now 29, was one of them.Leaving the army after serving eight years in the elite Duvdevan unit, he deposited his year-and-a-half-old daughter with his mother-in-law and took his wife to Thailand for three weeks. The Beit Shemesh native had been abroad only once before – to Turkey.What left a lasting impression on him in Thailand, however, was less the Crystal Creek Waterfall in the northern city of Chiang Mai, or the Mekong River along the border with Laos, or the beaches of Koh Samui in the south, but that on one regular July Friday night in Koh Samui, some 1,350 Israelis were clamoring to take part in a kiddush at the local Chabad house.There were so many people that they had to be divided into three shifts.Looking at the faces, Cohen was struck with the realization that the vast majority were recently released IDF veterans going not to Europe or the US but to some of the most far-flung – and often most poverty-stricken – places on the globe.That’s when the proverbial light bulb switched on in his mind.“I said to my wife that there is something going on here, and that we have to tap into this and show the real Israel,” Cohen explained. 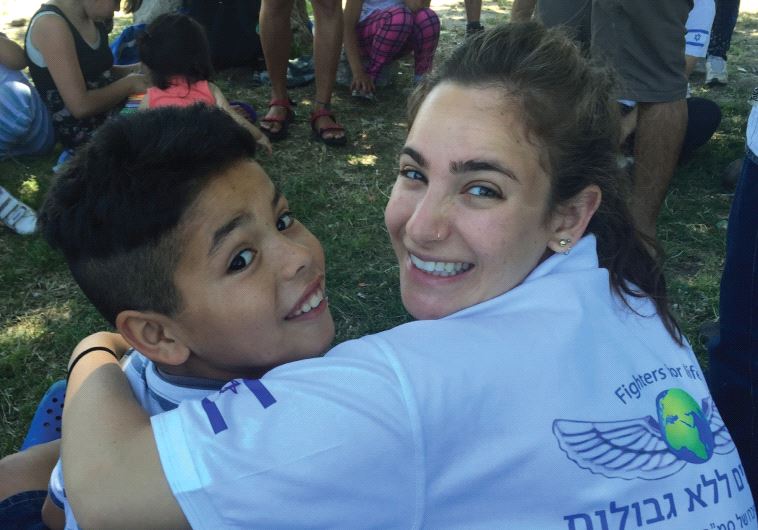 A FFL volunteer drapes her arm around a young Argentinian boy
Having just been released from the army, and still pumped up with a great deal of patriotic fervor and motivation, he told his wife that just as there are organizations such as Doctors Without Borders which sends doctors abroad to assist others, the reservoir of IDF vets going abroad after their service could be parlayed into something similar that could benefit Israel, while doing good for the local population.So when Cohen returned to Israel, he set to work. He met for coffee with a couple of other IDF officers, Yair Atias, 27, and Boaz Malkieli, 27, and they discussed the idea of using the thousands of Israelis going to Third World countries each year to show the world the IDF soldiers they don’t necessarily see on their television screens “live, from Gaza.”“The idea was to use the backpackers as the infrastructure for people to do ‘blue-and-white’ humanitarian work to show the real Israel to the world,” he said.“Not through words – that we have an abundance of – but through concrete actions. We wanted to do something different – a different kind of Israeli start-up.”The three opened up a Facebook page for the group they decided to call Lohamim L’lo Gvulot, which literally means Fighters Without Borders. But they didn’t like the literal translation, concerned that in English that name had an aggressive and even militaristic ring to it. So they changed the English name to Fighters for life (FFL).“We wrote on the Facebook page that our goals were to turn Israel into a humanitarian power, not only a technological and agricultural power; to do good in the world; and to show another side of Israel that people do not see. We wanted to create a different discussion about Israel. We wanted to do a good Jewish deed, and also do hasbara [public diplomacy] for the country, but do it differently.”The idea was to get a group of the backpackers to start their trek not going directly to destinations such as Kathmandu or Lima, but to volunteer for a couple of weeks in one of the countries they would be touring.The three wrote that they were putting together a delegation to India, and asked if anyone was interested. 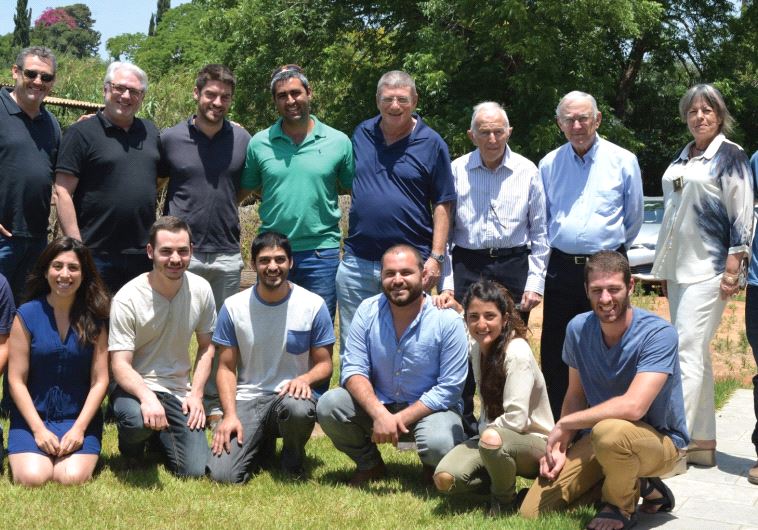 FFL founder Gili Cohen (back row, fourth from the left) stands to the right of organization president CEO Maj.-Gen. (res.) Eliezer Shkedi with other members of their team
Within three days they had 15 people, 45 in the first week. Today, the FFL Facebook page has some 11,000 followers, and some 550 applicants applied for one of 35 slots on the delegation currently volunteering in India.“We thought we would have to convince people that this is something worth it for them,” he said. “In the end, we have intensive interviews and choose whom we want.”The project works like this: Cohen will place a notice on the FFL Facebook page about a delegation forming to go to one of four destinations: Mumbai, Buenos Aires, Gondar, or – the newest destination that will receive a group in 2017 – Mexico City.Once there, the group volunteers in one of the more run-down neighborhoods in the city, generally in schools where they teach everything from English, math and science, to dance, personal hygiene and Krav Maga.One of the unique aspects of the program is that it is so cost-efficient. With the youth going on their trek abroad in any event, there is no need to buy their tickets.FFL only has to provide room and board for twoand- a-half weeks. As a result, Cohen said, it is possible for as little as $11,000 to send a delegation of some 35 highly motivated Israeli youth to work in the slums of Mumbai.So far, the organization has sent six groups abroad, and by the end of 2017 the number will reach 10. “For $100,000 we can send nine delegations to nine different countries a year,” said Cohen, who works on a voluntary basis as the group’s director-general.The volunteering takes part at the very beginning of the treks, which generally range from about three months to a year. The participants usually fly over together as an organic group, and then, after the volunteering is done, often continue their travels with one another.Another benefit, said Jerusalemite Guy David, an ex-officer in the Home Front Command’s Search and Rescue Unit, is that by starting off the trek with this type of volunteering, the participants come into contact with the people and the culture in a way that they would not be able to do by bouncing from one hostel to the next, or from one hike to another.David, currently in Mumbai leading the FFL delegation there, is already on his third stint. Generally, the only contact people backpacking across India have with Indians is with “the guy who sells the bus ticket,” he said in a recent interview over Skype. “Here, you meet the people, learn about the culture and understand the country at a much deeper level. It enriches your trip. We are giving, but also get back.”David’s group of 35 Israelis is working in a three-story building in the run-down Santacruz neighborhood that houses three schools, one on each story, for Hindi, Marathi and Urdu students. The Urdu school is Muslim, and from 7:30 a.m. to 12:30 p.m., the Israelis – fresh out of army service – split up into pairs and give instruction on a wide range of subjects. Cohen said that the delegation goes back to the same school and works with the same children each year, to ensure continuity.The administrators of the school, the teachers, parents and children are all well aware of the fact that the volunteers are Israeli, because they wear an Israeli flag on their shirtsleeve – literally – as well as the name of a fallen IDF soldier their delegation is named for on the back.Each delegation is named for a soldier who fell during Operation Protective Edge. The delegation in India is called Team Daniel, named after Daniel Pomerantz; the one to Buenos Aires is named after Oz Mendelovich; and the delegation to Ethiopia is called Team Sean, after lone soldier Nissim Sean Carmeli.David said his delegation has not run into any difficulties because they are so visibly Israeli and ex-soldiers. Not only has their nationality not caused any problems, he said, but an administrator from another school in the hardscrabble Mumbai neighborhood came up to him and asked that he send a delegation to his school as well.He quoted the administrator as saying, “Look at this! I’m a Muslim, you’re a Jew, and we’re sitting here talking about education.”One of Cohen’s favorite pictures from the hundreds he has from the various delegations is that of a group of Indian Muslim women, covered from head to toe in black burkas, at a closing ceremony for the program in Mumbai where their children were holding tiny Israeli flags. 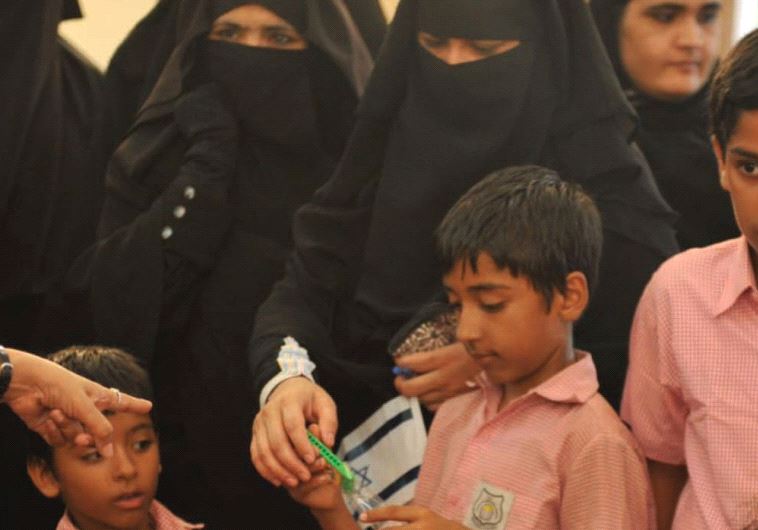 Indian Muslim women attend a closing ceremony for the Fighters for Life program in Mumbai
Cohen said that although what he is doing is informal, nontraditional diplomacy, he has been helped on the ground in each of the locations by traditional diplomats – the Israeli consulates which help FFL make the necessary contacts and provide logistical help.Likewise, FFL is also assisted in each of its locales by the local Jewish community as well by the Chabad houses.According to Cohen, those who take part in the program generally cite one of three reasons for their participation.There are those who want to do it because it brings them personal fulfillment and satisfaction, he said.These are youths who have set out on a long trip, and want to feel that for at least a part of the time, they are not focusing only on themselves.Another category includes those who see it as a form of mission. Cohen says these are newly released soldiers who have seen the ethical nature of the IDF – as opposed to what is presented so often in the international media – and want to show the world another face of the IDF soldiers. “They want to show what type of people the soldiers are,” he said.And finally there are those, Cohen said, motivated by the notion that Israel has a responsibility to be a “light unto the nations. They feel that the country has what to give, and want to be part of it.”FFL’s president is former IAF commander and El Al CEO Maj.-Gen. (res.) Eliezer Shkedi. He meets with each group before it leaves and, according to Cohen, has one line that he uses with each delegation.“He tells them the importance of what they are doing, as Jews, Israelis and human beings,” Cohen said. “And that is the whole story of Fighters for Life: doing something for the better as Jews, Israelis and human beings.”