The tires of 21 cars were slashed and pro-settler graffiti was sprayed in an Israeli-Arab town in northern Israel, the second such incident this week. 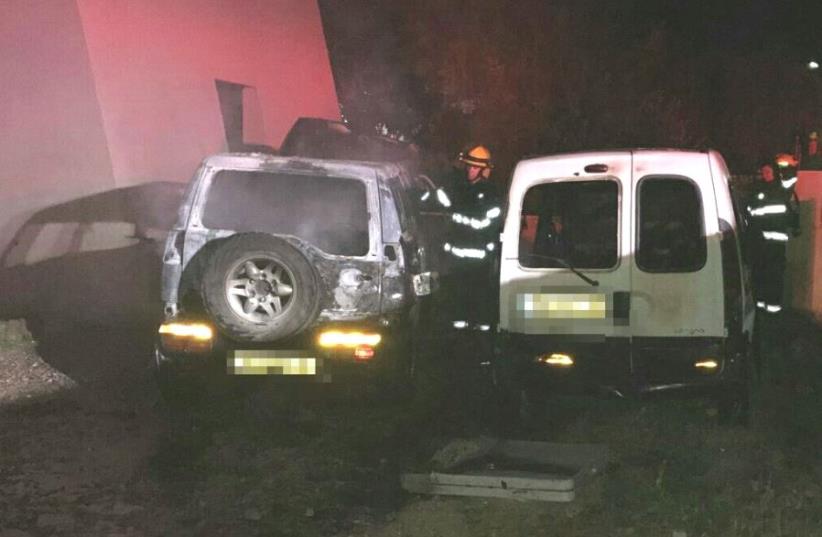 Vandalists burned vehicles in a Price Tag hate crime in northern Israel.
(photo credit: POLICE SPOKESPERSON'S UNIT)
Advertisement
JERUSALEM  — The tires of 21 cars were slashed and pro-settler graffiti was sprayed in an Israeli-Arab town in northern Israel, the second such incident this week.
Israel police are investigating the attack as a possible hate crime.
The incident took place overnight between Tuesday and Wednesday in Jisr az-Zarqa, north of Caesarea. Graffiti spray-painted on a house read: “The hill in Yitzhar, we won’t forget and we won’t forgive.”
It refers to the razing by Israeli authorities Monday of an illegal structure built on a hill near the Yitzhar Jewish settlement in the northern West Bank. Jewish militants refer to such incidents as “price tag” attacks, or revenge for actions taken against settlers.
On Sunday, several trucks were damaged and hate graffiti such as “Death to Arabs” was spray painted in the central Israeli-Arab town of Kafr Kassem.