MDA supplied 136 units of blood and blood components to hospitals during the fast. 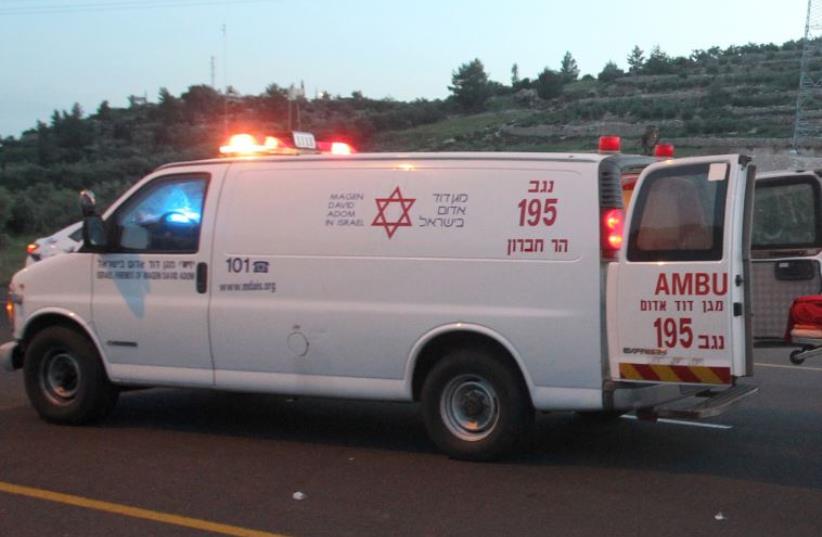 Ambulance (illustrative)
(photo credit: REUTERS)
Advertisement
Magen David Adom staff and volunteers were called to 2,326 events of people feeling unwell, accidents and women in labor during the fast of Yom Kippur.Of these, 1,596 were hospitalized, compared to 2,019 on Yom Kippur a year ago.A total of 249 people fainted, suffered dehydration or otherwise felt unwell. Eleven people had to be resuscitated. MDA ambulances took 136 women in labor to deliver in hospitals, while six women from Jerusalem, Tel Aviv, Ashkelon, Bnei Brak and Ra’anana were not reached in time and delivered at home.There were a large number of accidents involving children on bicycles (including electric bikes), skates, skateboards, rollerblades and other wheeled objects on near-empty roads. Some were treated on site, while others had to be hospitalized. A 13-yearold boy who fell from his bike on Route 471 near Kiryat Ono was taken in moderate condition with head injuries to the Rabin Medical Center-Beilinson Campus in Petah Tikva.A three-and-a-half-year-old child from Beersheba was hit in the head by a passing bicycle was taken to nearby Soroka-University Medical Center in moderate condition. An eight-year-old boy from Ramat Yishai fell from his bike and taken to Rambam Medical Center in Haifa in moderate condition.An 11-year-old girl who crashed into a parked car and suffered head injuries in Kiryat Ata was taken in moderate condition to Rambam as well.In addition, three people in their 20s were killed in a head-on collision on Route 25 near Dimona.A total of 20 people were hurt in road accidents during the fast.Twenty people were injured in violent incidents.After being stabbed in the chest, a 21-year-old man was brought to the Fureidis clinic near Zichron Ya’acov, then taken to Hillel Yaffe Medical Center, a few kilometers away in Hadera.A 38-year-old man, shot in a fight in Segev Shalom, was taken to Soroka-University Medical Center.There were three incidents of ambulances being attacked by rock-throwers in Beersheba, Eilat and Ashdod; MDA said that none of the incidents involved ultra-Orthodox Jews.A 50-year-old man who collapsed while exercising on the Herzl walkway in Kiryat Tivon, was resuscitated by MDA paramedics, and taken attached to a respirator to Rambam Medical Center in serious condition.Before the fast, MDA was called to treat a family of six suffering from shortness of breath and nausea after inhaling pesticide sprayed in their home.The husband and wife, aged 35, and their children aged two to 13, were taken to Jerusalem’s Shaare Zedek Medical Center and treated.Paramedics were called to Ein Bokek at the Dead Sea after a 40-year-old man drowned. They tried to save him but were unsuccessful.A young man who nearly drowned at the Gofra Beach at the Kinneret was resuscitated by paramedics and taken to Poriya Hospital near Tiberias in serious condition.MDA supplied 136 units of blood and blood components to hospitals during the fast.