'I always knew I would return': Visitor center inaugurated in Gush Etzion

Politicians, settler leaders, area residents and survivors of the initial four communities that were built in that area prior to the War of Independence came to the center’s ribbon- cutting event. 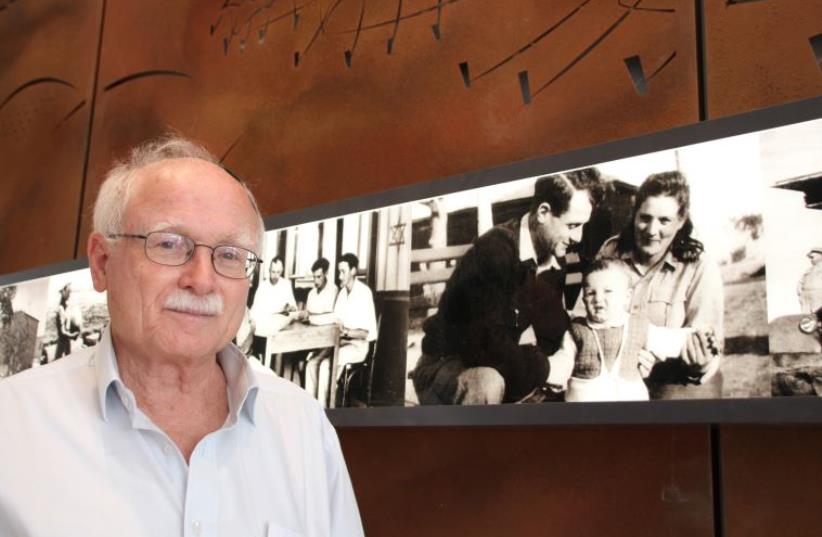 Yochanan Ben-Yaacov next to a photograph of himself as a toddler standing with his parents Yaacov and Sima Klapholtz in Gush Etzion prior to the 1948 War of Independence.
(photo credit: TOVAH LAZAROFF)
Advertisement
The morning after the Six Day War ended, Yochanan Ben-Yaacov left his army unit and hitchhiked to the site of the former Gush Etzion kibbutz of Kfar Etzion.“I arrived at 8:30 a.m.,” Ben-Yaacov recalled.He has no memory of the first three years of his life, which he spent there with his parents, who were among the community’s founders.But he had grown up on so many stories about the place that he recognized it immediately, he told The Jerusalem Post on Tuesday afternoon, as he sat in a new stone visitor center that was built on that same hilltop.“I always knew I would return,” the tall, white-haired man said. “It was what I was taught and it was how I was raised.”Politicians, settler leaders, area residents and survivors of the initial four communities that were built in that area prior to the War of Independence came to the center’s ribbon- cutting event.
The floor to ceiling screen at the new Gush Etzion museumThe center, housing also a museum, was constructed with NIS 15 million, partially from the government’s National Heritage Sites program and partially from private donors.The museum’s permanent collection includes a new movie about the battle for Kfar Etzion that was waged by more than 130 men and women, including Holocaust survivors. It is based on the letters they wrote to friends and family members from the besieged kibbutz.They held on for months with few supplies, out of a deep belief that they were defending both their new homes and Jerusalem. Ben-Yaacov was evacuated in the winter along with the mothers and children.Initially, his mother, Sima Klapholtz, remained, but she left to join him when he suddenly fell ill. His father, Yaacov Klapholtz, remained. He was among the 129 fighters – members of the Palmah, Hagana and kibbutz residents – who were massacred in Kfar Etzion on that day.The center’s opening was timed to mark the anniversary of that massacre, which in the Hebrew calendar occurred on the eve of Independence Day.The story of Gush Etzion has come to symbolize the larger narrative of the modern State of Israel.Ben-Yaacov, who turned his father’s first name into his last name, said he had reflected on that link on that June morning in 1967.Three months later, when prime minister Levi Eshkol and his cabinet authorized the reestablishment of the settlement, Ben-Yaacov moved there to help rebuild the kibbutz, where he has remained ever since.Gershon Shafat was born in Vienna in 1927 and immigrated to Israel with his family in 1934. He arrived in Gush Etzion as part of a unit attached to the Palmah to help create the national-religious kibbutz of Ein Tzurim.
Gershon ShafatA photograph of his unit’s arrival at the kibbutz now hangs on the museum wall.After the fall of Kfar Etzion, an order came from Jerusalem to surrender to the local Arab forces.The families of Ein Tzurim were evacuated during the winter, leaving a group of some 50 young men and women to defend the kibbutz.Fearful that they, too, would be killed, they insisted on putting down their weapons only if they could surrender to the Arab Legion. They hoped the legion’s ties to the British army would keep them from suffering the same fate.“At least with the British, there was someone to talk with,” he recalled.They explained this to representatives of the Red Cross who came to negotiate the deal.“The Red Cross told us we were not in any position to negotiate terms,” Shafat said.“But we told them, ‘If not, we will fight to the end.’” When the Arab Legion commander arrived in Ein Tzurim, he was shocked by their lack of weapons and ammunition, given how stiff the battle had been. He told them, “If I had fighters like you, I would have been able to make it to Tel Aviv,” Shafat recalled.“We were held in Hebron for three weeks, and then we were taken to the border between Jordan and Iraq. It was 10 months before were released,” he said.The Ein Tzurim families were relocated to the northern part of the country, outside of Haifa, where he has remained until this day. But the younger generation in his family has return to Gush Etzion. Shafat has two daughters who have raised their families there.“It is a good feeling to be here today,” he said.