Warm greetings on a landmark anniversary

The UK has been a friend of Israel in both good and bad times. 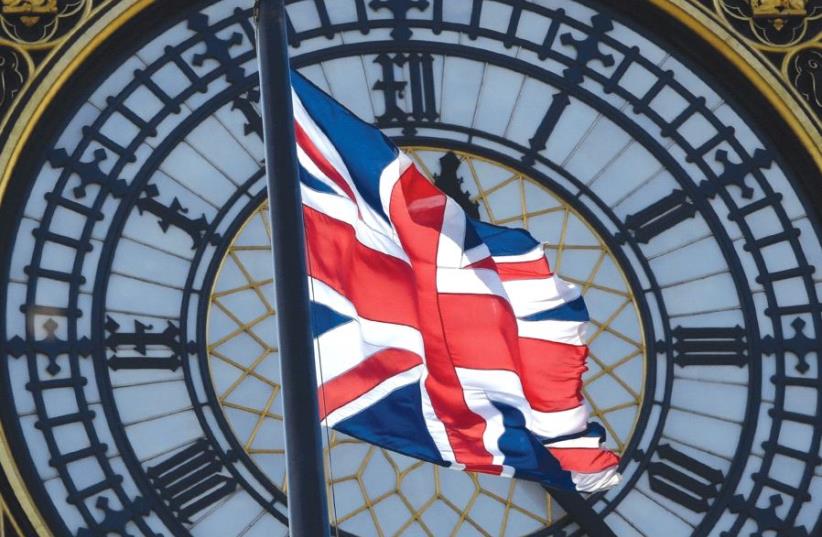 A Union Jack flag flies in front of the clock face on the Houses of Parliament in central London
(photo credit: REUTERS)
Advertisement
Yom Ha’atzmaut sameah!

This occasion is a time to celebrate and remind ourselves just how much the young Jewish state has achieved in its short life.2017 is a year of landmark anniversaries. In June we will be marking the 50th anniversary of the reunification of Jerusalem, Israel’s capital city, during the Six Day War. The subsequent freedom for believers of the three great faiths to access their holiest sites in Jerusalem was a moment of global importance and one we must reflect on at this time.In my eyes, the greatest anniversary we will be celebrating this year is the centenary of the Balfour Declaration – the short but momentous letter from then British foreign secretary Arthur J Balfour that recognized the Jewish connection to the Land of Israel. As the first official declaration of support for the establishment of a Jewish state in Palestine, the Balfour Declaration is heralded as the birth certificate of Israel. The letter gave momentum to the Zionist leaders and their dream at a crucial point in history.British Prime Minister Theresa May has said the UK will be marking the anniversary with pride and I look forward to Prime Minister Benjamin Netanyahu visiting London for the events later this year. I can’t think of a more poignant way of marking the occasion than the democratically elected prime minister of the Jewish state visiting the UK.The world around us is changing. The election of US President Donald Trump has been much discussed, but perhaps the most welcome new dynamic is Israel’s improving relationship with its Sunni Arab neighbors. With shared concerns over Iran’s nuclear program and the rise of Islamist extremism, countries that were once sworn enemies are seeing Israel as a potential ally for the first time. This presents an important opportunity to bring much-needed stability to the region. It would have been previously unthinkable that the Jewish state would be sharing intelligence and conducting joint military exercises just a few short decades after the very same countries were seeking to wipe Israel off the map.Most importantly, these warming relations hopefully stand to inject momentum and goodwill into the currently moribund peace process. With their Arab brothers alongside the Palestinians working to negotiate a viable peace agreement, they will find a willing partner in Israel.In my position as parliamentary chairman of Conservative Friends of Israel, I have had the pleasure of seeing the UK-Israel relationship going from strength to strength.Israel has many great friends in the British government and Conservative Party. Each and every day friends of Israel here in the UK stand up in Parliament to have their voices heard and celebrate both Israel’s many achievements and strong bilateral relationship with the UK, as well as challenging those that seek to delegitimize the only democracy in the Middle East.Just this past December, as many as 250 Conservative parliamentarians attended CFI’s largest-ever business lunch, where they heard from May about her own support for Israel.Since the UK’s last general election in May 2015, CFI has brought well over 100 Conservatives to Israel on fact-finding missions. Most of those were first time visitors. Seeing is believing.The UK has been a friend of Israel in both good and bad times. From supporting Israel’s right to self-defense against the brutal terrorist groups along its borders and the UK’s recent unprecedented condemnation for the UNHRC’s “obsession” with Israel through to its strong opposition to the so-called BDS movement and facilitating record bilateral trade totaling an annual £6 billion, the UK has stood beside Israel.Britons benefit greatly from this relationship. Israeli companies employ hundreds of Brits. Close intelligence sharing and military cooperation protects British lives. Israel’s medical breakthroughs are improving the lives of countless Brits. Israel’s Teva provides one in six generic prescription drugs used by the UK’s National Health Service – a remarkable 350 tablets every single second.As the UK begins its process of exiting the European Union, we will be looking evermore outwards to the world. Israel will remain a key ally and I’ve no doubt that our great countries will become ever closer.At the age of 69, rather than settling into its dotage, Israel is moving forward into the future with vigor. Its best years are ahead.As Israelis prepare to enjoy a day of celebrations across the country, I personally look forward to celebrating Yom Ha’atzmaut in London with your excellent ambassador to the UK, Mark Regev, for what has become one of the most anticipated events of the year. I’ve seen photos of previous Yom Ha’atzmaut festivities in Israel and it certainly looks like a great occasion.Next year in Jerusalem! The writer is Conservative Friends of Israel’s Parliamentary Chairman and UK Envoy on Post-Holocaust Issues.