From sorrow to celebration, 'The Jerusalem Post' provides live updates from Israel's most emotional day. 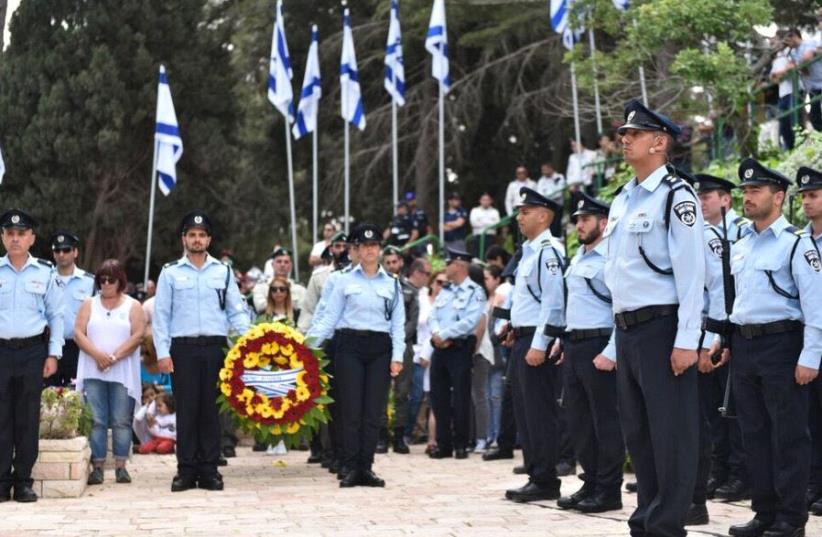 The official Memorial Day State Ceremony at Mt. Herzl Cemetery in Jerusalem
(photo credit: ISRAEL POLICE)
Advertisement
Israelis around the country and Jews everywhere will be taking time today to pay respects to the 23,544 men and women who died from war and terror attacks since the early days of the Jewish settlement in the country.
Siren brings Israel to a standstill as 23,544 fallen remembered (credit: JPOST)
Memorial Day events begin with the official State Ceremony at Mt. Herzl Cemetery in Jerusalem, during which a two-minute-long siren pierces the air and the country comes to a standstill in respectful silence.
Throughout the day, additional ceremonies in memory of the fallen are taking place across the country.
Later this evening, sorrow will be replaced by celebrations as the country transitions from Remembrance Day to Independence Day and city streets fill up with revelers, celebrating the state's 69th birthday.
Among Israel's officials to lament the loss of the soldiers who passed away defending the country was Defense Minister Avigdor Liberman, who paid tribute to the fallen at Tel Aviv’s Kiryat Shaul military cemetery. Liberman said that the loss of soldiers in battle was the price that the Jewish people have paid to be “masters of their own fate” in Israel.Quoting the author Haim Wiezmann, Liberman said that "no state is presented to a nation on a silver platter. It needs to be fought for, it requires the will to fight and even give one's life." The fallen soldiers are “the terrible and painful price of the decision of the Jewish people to be the masters of their own fate, to return to their homeland and to realize a free, sovereign and national life and culture,” he said.“Generation after generation we are forced time after time to accompany to their rest the best of our sons and daughters, our young and talented, the salt of the earth,” he continued, adding that “the passing of time does not dull the pain, but only strengthens the recognition of the magnitude of loss.”The defense minister also stated that it was due to those who fell defending the State of Israel that the Jewish State has become a source of inspiration throughout the world for its achievements.“These achievements are the fruit of Israel’s labor, inspiring skill and collective creativity. But they could not have come into the world without the promise of security and existence that was achieved first and foremost by the fallen,” he said.Echoing statements by Prime Minister Benjamin Netanyahu and President Reuven Rivlin, Liberman said that Israel is continuing to work for the return of soldiers who went missing in action.“With an embracing hand and a supportive shoulder, we will continue to work to return those missing in action and those who fell in Israel’s campaigns whose resting place is unknown, and together pray that the list of the fallen will not grow any longer,” he said.Deputy Minister of Defense Eli Ben Dahan, who paid tribute to the fallen at the Ramle military cemetery, said that if it were not for those who fell in battle, the Jewish people would not be an independent people in the State of Israel.“Today, and every day of the year, we must remember the heroism of the fallen,” Ben-Dahan said.“The fallen were not bloodthirsty and were not eager to fight. They placed the common good, the welfare of the people above and beyond their own desires. They sacrificed themselves so that we would live in the State of Israel as a proud people in our land which we returned to after two thousand years of exile.”Anna Ahronheim contributed to this report.