The new government is convening in order to take its official photograph as well.

By JPOST.COM STAFF
MAY 19, 2015 13:59
Rivlin and Netanyahu toast to new government
Advertisement
The 34th Government of Israel convened at the Presidential Residence in Jerusalem for the presidential reception and to take the official ceremonial photograph.Standing at the podium alongside President Reuven Rivlin, Prime Minister Benjamin Netanyahu said he will make every effort to bring about an agreement with the Palestinians that will maintain Israeli security. 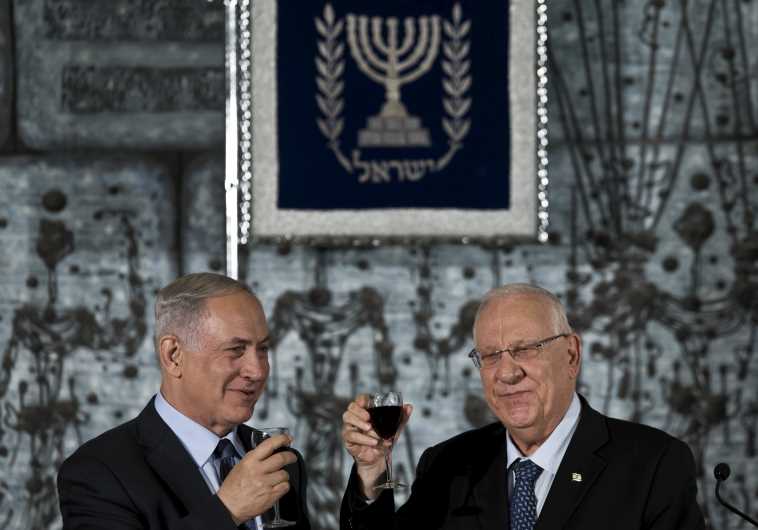 He said that the first task of the new government will be to protect the country against threats from Israel's enemies in the region. Netanyahu also said that lowering the cost of living is a top priority.  Last week Prime Minister Benjamin Netanyahu’s 20-minister government was sworn in following a slew of problems with Likud cabinet appointments. The Knesset approved the government 61-59 just after 11 p.m.Tweets by @Gil_Hoffman Netanyahu’s No. 2 in the Likud, MK Gilad Erdan, refused to enter the cabinet, declining the prime minister’s offer to serve as public security minister. He had demanded the Foreign Minister position, which Netanyahu has kept for himself in case he will be able to expand his coalition later on. But Erdan later showed up at the Knesset and voted in favor of the new government, enabling it to be approved."The swearing-in of a Likud government is a happy occasion but I am sad personally about the developments with me," Erdan said.Initially, several ministers also declined Netanyahu’s offers, including new Interior Minister Silvan Shalom, Culture and Sport Minister, Miri Regev, Pensioner Affairs Minister Gila Gamliel and coalition chairman and Knesset Foreign Affairs and Defense Committee chairman Tzachi Hanegbi – but they all later relented.To accept the challenging job of heading a coalition with just 61 MKs, Netanyahu had to promise Hanegbi that after a year he would join the cabinet in place of Ophir Akunis, who is a minister-without-portfolio. Netanyahu wanted Akunis to serve under him in the Communications Ministry, but Attorney-General Yehuda Weinstein ruled that two ministers cannot serve in one ministry.

Gill Hoffman contributed to this report