By HERB KEINON, TOVAH LAZAROFF, KHALED ABU TOAMEH
JULY 29, 2015 12:16
Demolition of buildings and confrontations in Beit El
Advertisement
The IDF demolished two illegal apartment buildings in the Beit El settlement Wednesday afternoon, ending a two-day standoff between the Border Police and right-wing activists.The move in execution of a High Court order failed to quell tensions on the issue of building beyond the pre-June 1967 lines, as Prime Minister Benjamin Netanyahu immediately authorized the construction of 300 settler homes to replace them. 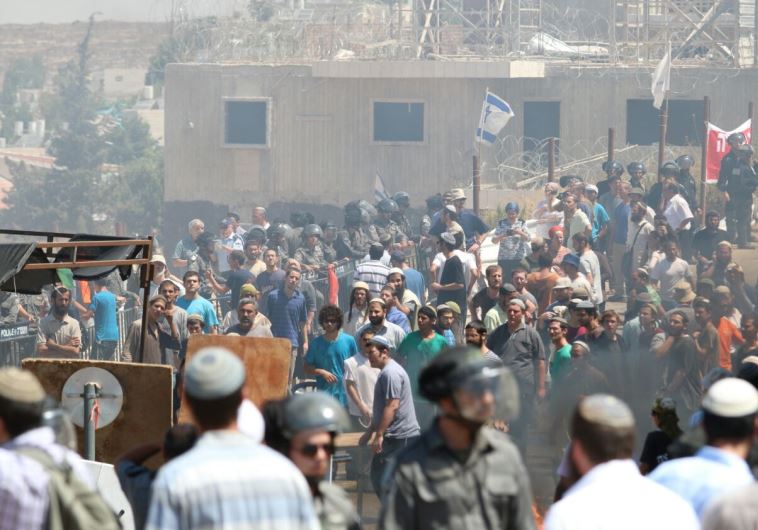 (photo credit: HILLEL MEIR/TAZPIT)Meanwhile, right-wing activists who attempted to reoccupy the abandoned settlement of Sa-Nur in northern Samaria warned that the IDF was poised to forcibly evacuate some 20 families that had returned to the ruins of the settlement that was destroyed during the 2005 disengagement from the Gaza Strip.Earlier in the day, the families had called on Netanyahu to create a national commission of inquiry to determine whether the four northern Samaria communities that were evacuated at that time could be rebuilt.Netanyahu has not commented on the issue of Sa-Nur, but he did throw his support behind the legal battle by the Beit El settlement to save the two apartment buildings, which would have housed 24 families.Once the High Court of Justice issued its final decision on the matter Wednesday afternoon, Netanyahu said the rule of law must be respected.“Israel is a law abiding democratic state that respects the decision of the courts,” Netanyahu said.Agriculture Minister Uri Ariel from the Bayit Yehudi Party issued a veiled threat to break up the coalition when he demanded that Netanyahu take action and legalize new building within an hour.

(Photo credit: Tovah Lazaroff)
(Photo credit: Tovah Lazaroff)Likud sources, however, said his statement was a public relations gimmick, since Netanyahu had already informed Bayit Yehudi that he would approve new housing.Soon after Ariel’s statement, Netanyahu ordered the immediate construction of 300 housing units at Beit El.He had promised the community in 2012 he would authorize the units in exchange for their peaceful evacuation of the Ulpana outpost.But activists were not assuaged by his actions, particularly since he also had pledged at the time that the two apartment buildings would be legalized.“I personally helped the families move,” one outraged woman told Border Police officers in Beit El as she watched cranes take bites out of the concrete structures.The contractor had began work on the buildings in 2010, but without the necessary permits, which he only received last week.The High Court of Justice on Wednesday rejected all petitions that argued it was illogical to destroy the structures due to the missing permits.The contractor has pledged to rebuild, and a cornerstone- laying ceremony is to be held at the new site in Beit El Thursday afternoon.In addition, Netanyahu on Wednesday advanced plans building in Jerusalem neighborhoods over the Green Llne that included, 115 units in Pisgat Ze’ev, 300 units in Ramot, 70 units in Gilo, and 19 units in Har Homa.The Palestinian Authority and the European Union immediately condemned the construction.Nabil Abu Rudaineh, spokesman for the PA presidency, said the decision would sabotage US and EU efforts to resume the peace process between Israel and the Palestinians.“This requires a quick intervention by the international community to stop dangerous Israeli policies that could lead to further deterioration,” he said. “The decision also represents a message that Israel is not interested in peace or any efforts to create a climate that paves the way for peace.”The EU slammed the government’s decision, saying it calls into question Israel’s commitment to a two-state solution.“Moreover,” a statement released by the EU read, “the governmental plans to approve unauthorized outposts across the West Bank would further undermine the practical possibility of implementing the twostate solution.”The statement said the EU expects Israel to demonstrate its commitment to the two-state solution not only through words, but also actions.“We urge the government of Israel to urgently reverse recent decisions and put an end to settlement expansion,” the statement read.But in Judea and Samaria, settlers, activists and politicians focused their outrage at the lack of building on politicians and the High Court of Justice.For weeks, settlers had rallied in support of legalizing the structures.Early this week, young activists began camping out in the buildings in advance of a forced demolition.The Border Police removed them in a surprise predawn raid Tuesday. But the activists and settlers continued to arrive in Beit El throughout the day and held a tense standoff with security forces that occasionally flared into violence that included an exchange of blows.A total of 22 people were arrested in clashes with police late Tuesday night and throughout Wednesday for either throwing stones or attacking police.Upon hearing the High Court verdict confirming the demolition on Wednesday morning, some teens unsuccessfully attempted to cross the police barrier in the direction of the doomed buildings.“We’re waging war,” shouted an adult activist as he stood on a porch that overlooked the activists and demolition site. But in spite of the strong words he shouted through a bullhorn, the youths did little to disrupt the razing of the buildings.At times they sang, and at other times they resumed trying to push through the barrier, but were easily pushed back by police.Every so often, they threw water bottles at police. Others attempted to talk with the police as they stood there.“Look me in the eye,” said one activists as he stood face to face with an officer.The officer looked away.“You can’t look me in the eye,” the activist said in response.“It’s because you know that you are in the wrong.”The officer then looked the young man in the eye and the two of them stood there, face to face for a long moment in a staring contest.Ben Hartman contributed to the report.
Advertisement
Subscribe for our daily newsletter