"I admire you all greatly, and the Jewish people owe you an immense debt of gratitude," Prime Minister Benjamin Netanyahu told the veterans. 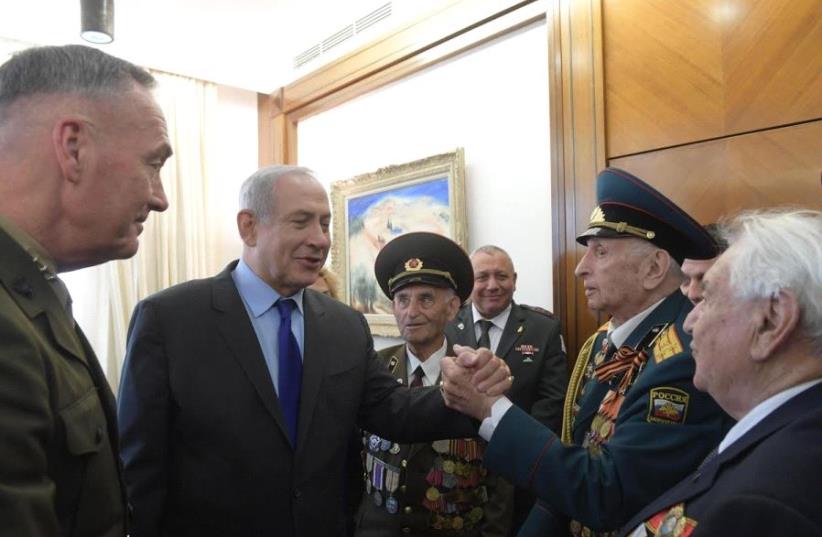 Prime Minister Netanyahu and Chairman of the US Joint Chiefs of Staff General Joseph Dunford meet with WWII veterans in Jerusalem to commemorate Victory in Europe Day
(photo credit: AMOS BEN-GERSHOM/GPO)
Advertisement
WWII veterans commemorated VE Day, the Allied Victory over Nazi Germany, in Jerusalem on Tuesday.Several hundreds of Jewish WWII veterans of the allied armies, many wearing war medals, marched through the streets of Jerusalem with their families.
WWII veterans march through Jerusalem to commemorate VE Day (Reuters)
An official state ceremony is scheduled to take place at the Jerusalem Monument of the Jewish Soldiers and Partisans on the Mount of Remembrance.A group of veterans also met and shared their personal stories with Prime Minister Benjamin Netanyahu and Immigration and Absorption Minister Sofa Landver."You saved the Jewish people as well as humanity. Humanity might have recovered, but the Jewish people would not have. It is truly a tremendous, historic contribution. I am proud of you, we are all proud of you. I see all your war medals -- you deserve them. I know all those medals were earned through much blood and sacrifice. I admire you all greatly, and the Jewish people owe you an immense debt of gratitude," the prime minister told the veterans.At the conclusion of their meeting, Netanyahu and the veterans met with the Chairman of the Joint Chiefs of Staff of the United States, General Joseph Dunford, and IDF Chief of Staff Gadi Eizenkot.