‘We ate from the same mess tin’

The trust in Ben-Eliezer wavered, but our friendship remained. 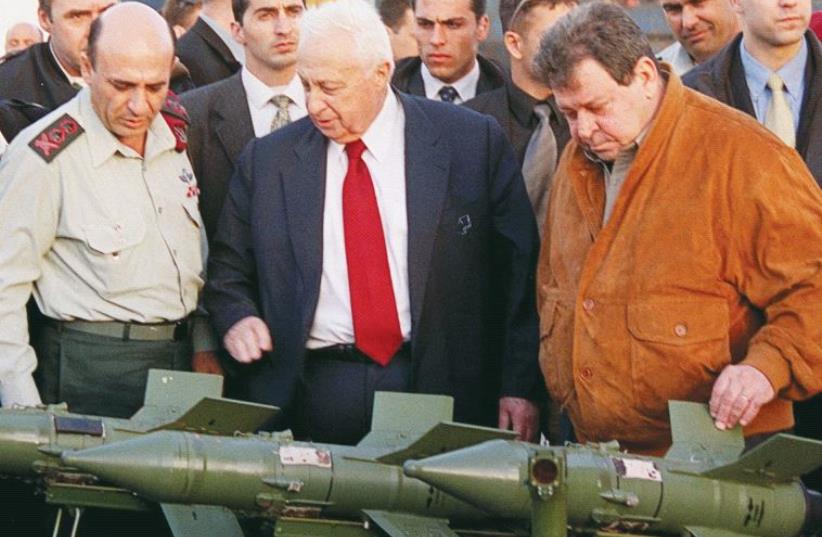 FORMER LEADERS (from left) chief of staff Shaul Mofaz, prime minister Ariel Sharon, and defense minister Binyamin Ben- Eliezer examine Sagger anti-tank missiles captured on the Palestinian arms ship ‘Karine A’ in January 2002.
(photo credit: MOSHE MILNER / GPO)
Advertisement
In the English-speaking world, an “old boys network” describes a brotherhood or connection from a prestigious prep school, elite university, or an army unit that eventually stretches to politics and the economy. In Israel, the formative experience is service in the IDF, and therefore this term can be translated as a military friendship, or in simpler terms, “We ate from the same mess tin.”This was the essence of the connection to Fuad, as everyone called former defense minister Binyamin Ben-Eliezer, among the soldiers of the Shaked Unit – simple soldiers like me, officers and the unit’s commanders through the generations.For better or worse, this was part of our DNA. The almost blind loyalty among many of us that started to crack only in the last two years, when the proportions of the corruption allegations he was involved in were revealed.We had heard about it previously – rumors of such things had spread over the years – but we ignored them and kept silent, and one way or the other he was forgiven. The past two years in which the wrongdoings were revealed, and an indictment was filed, put a stain on his past and his contributions to the security if the state.Ben-Eliezer was born in Iraq, grew up on a kibbutz, enlisted in the IDF and was promoted to the rank of brigadier- general. But always, and not only among those who had come out of the Shaked Unit during its 40 years of existence as a reconnaissance unit in the Southern Command, he was known as the commander of 424, the unit’s number.When I enlisted in May 1969 as a greenhorn recruit, it was difficult for me as an 18-year-old to understand that which was greater than I. The previous commander, whom I did not have the privilege of knowing, was a Beduin with a Jewish name – Amos Yarkoni. The current commander, who was a Jew, had an Arab name. I remember him: roundish, with red paratrooper boots, a black beret and his weapon across his chest, running with us through the rough terrain during platoon or company training.There wasn’t just one Fuad, there were many. As an army man, a politician and a man, Fuad was the toughest and strictest army commander who put us through suffering and difficult ordeals to the extent that it is hard to believe that the IDF once operated in such a manner. There was the Fuad who was sent on secret missions to build up the army of Singapore and establish military ties with the Christian Phalange in Lebanon.And there was also the Fuad who, as the military governor of the West Bank, worked in the territory of the Jewish underground and was rumored to have treated some of its members kindly.As a politician he zigzagged on more than one occasion. He began his career in flirtations with the Mizrahi political party Tami, of Aharon Abuhatzeira, but then hooked up with Ezer Weizman and the two landed in the Labor Party, of which he would eventually become chairman and serve as defense minister.Fuad was not a “leftist,” but he believed in the need to make peace with the Palestinians and come to agreements with the moderate Arab states. As defense minister and energy minister, where he made ties with the businessmen who led him to run afoul of the law, he was persistent in his efforts to establish special ties with Turkey and Egypt, where he formed good working ties and a friendship with President Hosni Mubarak.He was a hedonist who loved life and lived it to the fullest. An outgoing, friendly man who would slap you on the shoulder and tell you a funny joke in his unmistakable accent. When he was hospitalized and went into a coma that he eventually recovered from, he spoke of the experience of coming back from the next world. Until his dying day, he maintained his innocence and we, his friends who visited him at his house in Jaffa occasionally, sheepishly nodded our heads.The trust in our “commander” was cracked, but the friendship wasn’t.