Should a website that facilitates affairs for married people be allowed to advertise on television and radio or does that constitute the soliciting of sexual services? 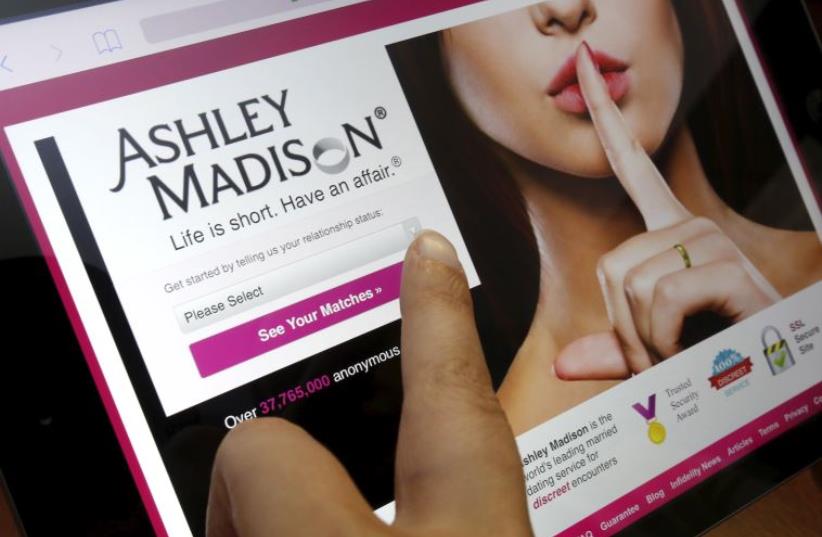 The homepage of the Ashley Madison website is displayed on an iPad, in this photo illustration
(photo credit: REUTERS)
Advertisement
In a cutting-edge debate over moral values in broadcasting and commercial free speech, Ashley Madison, a website that connects married persons interested in having affairs, moved a big step closer to advertising on Israeli TV and radio during a Monday hearing before the High Court of Justice.The heart of the debate has been: Should a website that facilitates affairs for married people be allowed to advertise on television and radio or does that constitute the soliciting of sexual services? Likely the key development at the hearing was the broadcasting regulator’s lawyer, Yair Asael, revealing that, under the gun of the petition, an appeals body for the broadcasting regulator recently opened the door to Ashley Madison airing a highly revised infomercial – despite the regulator’s CEO recently having unequivocally and categorically closing the door on even a modified advertisement.Asael said the regulator’s CEO had been highly disappointed with the flexibility shown by the appeals board and said Israel would be acting more progressively than other countries that had stood by banning the website.According to an understanding reached at the hearing between High Court Justices Yoram Danziger, Neal Hendel and Anat Baron, and the lawyers for both sides, the parties now have approximately 14 days to negotiate the content of the infomercial before Ashley Madison can return to the court to seek to compel the regulator to permit the advertisement.A lawyer for the Center for Enhancing the Strengthening of Family Values concluded the hearing quoting Torah scholar Nechama Leibowitz, stating, “A nation can possess every physical and spiritual gift and still be judged for destruction” – and explaining that allowing the ad’s destructive message to run would destroy billions of shekels of the state’s investment in educating youth.Ashley Madison filed the petition May 21 after the broadcasting regulator blocked its television and radio commercials, saying they would violate a rule prohibiting advertising for “sex services.”In a March 29, 2015, letter, Second Authority CEO Nir Schwecki wrote to Ashley Madison that its advertisement and services were “a platform to assist in developing sexual relations between married people that were not with their spouse” and that encouraging adultery can destroy families.The petition lays out the claim that in past court cases, commercials containing sexual innuendos and expressions have been approved for broadcast, but that Ashley Madison’s commercial, which does not contain sexual innuendos was banned.Ashley Madison lawyer Tomer Rife pressed this point on Monday, invoking a variety of recent ads involving sexual innuendos about supermodel Bar Refaeli and other female models engaging in sexual relations, and saying the regulator was using a “double standard” in this case.However, the justices, particularly Baron in one of the first high-profile cases in which she has been vocal since becoming a justice earlier this year, pushed back on this point.Baron said that even if there were advertisements with more blatant sexual innuendo than Ashley Madison’s advertisement included on its face, those advertisements were all for non-sexual products, whereas “behind” Ashley Madison’s message was a “product” that clearly “involved actions” which were sexual.Rife also quoted a previous leading decision by former justice Dalia Dorner who warned of a situation “where the governing authority takes upon itself the power to determine what is good for citizens to know about” to paint the state as trying to employ “thought police” as in some closed undemocratic societies.The AshleyMadison lawyer further tried to portray the regulator’s position as not viable, saying “the phenomena of married persons] engaging in relationships outside of marriage exists… and will exist whether someone wants it to or not.”In a past interview with The Jerusalem Post, Ashley Madison CEO Noel Biderman told the Jerusalem Post he believed his success of registering 35 million active members worldwide and 320,000 in Israel since it launched in the country in May 2014 will speak for itself and win over the justices even if they are initially skeptical.Part of Biderman’s confidence that his website would win on the issue relates to what he calls the company’s “40 for 40” record of successfully overcoming regulatory restrictions in any country it has seriously targeted since it opened for business in 2001 (though the site was blocked in Singapore.) He said his broadcasts were blocked temporarily or had involved intense negotiations at some point in Canada, England, France, the US, Australia and Brazil, but that in every case, the company overcame the obstacles.Still, the justices seemed unimpressed with many of the website’s arguments, with Baron stating that the arguments ignored the reality of the sexual actions the website was encouraging, such that the arguments “did not encapsulate” the real issues involved and were “a bit hypocritical.”Hebrew University Professor Barak Medina told the Post previously odds are equal that the High Court will intervene, giving the example of smoking as one where the state cannot prohibit the practice or electronic advertising, but courts have upheld the state’s ban of television and radio advertising.