In a statement issued Friday, representatives of the organization, along with "13 diverse New York elected leaders," expressed their commitment to battling "against history's oldest hate." 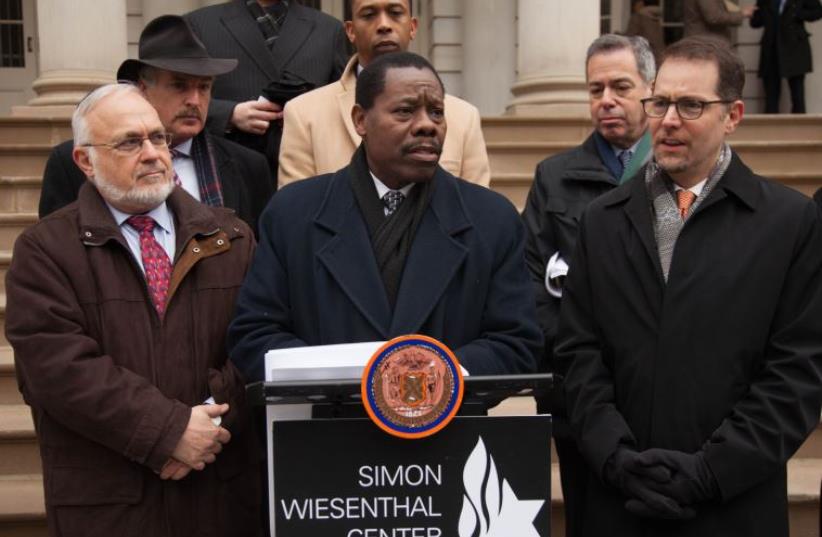 Rabbi Abraham Cooper, Assembly Member David I. Weprin, speaking at the podium Council Member Mathieu Eugene, behind him Assembly Member Walter Mosely, Mark Weitzman, Council Member Mark Levine
(photo credit: SIMON WIESENTHAL CENTRE)
Advertisement
The Simon Wiesenthal Center on Friday called on US President Barak Obama to convene a summit on anti-Semitism during a press conference as the center unveiled its annual
In a statement issued Friday, representatives of the organization, along with "13 diverse New York elected leaders," expressed their commitment to battling "against history's oldest hate" while invoking "the legacy of Dr. Martin Luther King Jr. to inspire a new coalition" of community leaders as the anniversary of the civil rights figure's birthday approaches.Rabbi Abraham Cooper, Associate Dean of the Simon Wiesenthal Center, said in the statement that “Last year was a disastrous year. We are confronting an unprecedented and toxic combination of terrorist threats, an online sub-culture of hate and theologically and ideologically fueled anti-Semitism."He added, "To defeat anti-Semitism, we need to build new coalitions. Today’s remarkable turnout representing the full diversity of the great City of New York, is an important step in the right direction, but we need to do more… we call on President Obama to convene a summit on anti-Semitism in the coming months.”New York political figures also joined the press conference, expressing their solidarity with the Jewish community. “[A]n attack against a Jewish person is an attack against all of us,” said Council Member Mark Treyger, Chair of the Brooklyn Council Delegation. “The NYPD informed me that Jews are the number one victims of hate crimes in New York City. We will continue to march with other groups so that no one: no Jew, Christian or Muslim has to be afraid.”“As we hit upon the dawn of Dr. King’s birthday, we remember he taught us that if good men and women fail to speak out, then hatred will never be defeated,” said Assembly Member Walter Mosely (D-Brooklyn). “Dr. King wasn’t just about a dream, but about acts and solidarity.”Elected officials such as Council Member Mathieu Eugene (D-Brooklyn) also denounced attacks against Israel and mentioned by name the "so-called BDS movement that lobbies for the boycott of the Jewish state."“I remember visiting the pediatric ward of a hospital in Israel, in which a Haitian child who survived the earthquake, but suffered from a disease that couldn’t be treated in Haiti was recovering," Eugene said.  "Lying alongside him were Jewish, Arab and other youngsters from around the world. That is the true face of Israel, which I will always cherish and seek to protect,” he added.The Simon Wiesenthal Center's 2015 Top Ten List of Anti-Semitic/Anti-Israel incidences were also published after the event. Topping the center's list this year was the San Bernardino shootings, in which two terrorist carried out a murder rampage that saw 14 people killed, according to the organization's website.The Wiesenthal Center cited the father of one of the San Bernardino killers who told an Italian newspaper on that his son, Sayed Rizan Farook, had an obsessive hatred of Israel that underscored his Islamic radicalism and allegiance to the ideals of Islamic State. ISIS, the European Union and UK's Labor party leader Jeremy Corbin also made the center's 2015 list.