What are the strategic demands Netanyahu is going to make during Trump's visit?

Ahead of US President Donald Trump's much-expected visit to the region, Israel is already preparing to lay on its biggest ally some of the most pressing issues it seeks collaboration on. 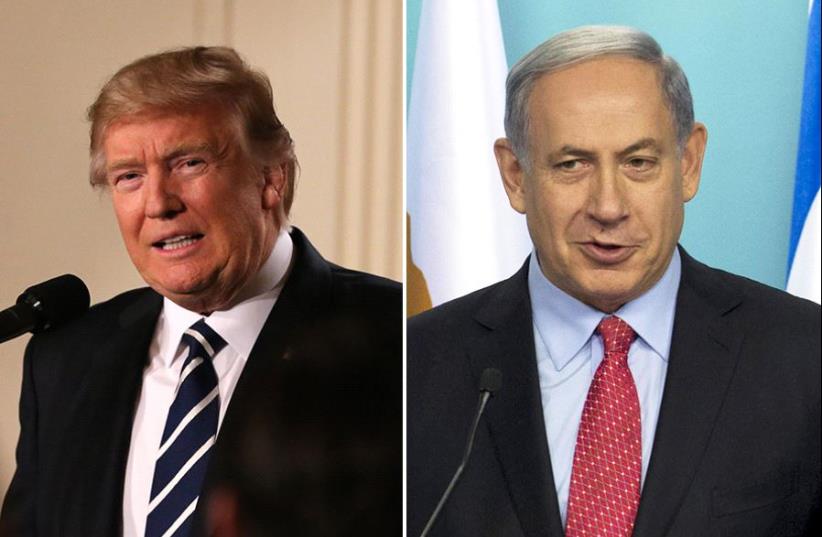 Trump and Netanyahu
(photo credit: REUTERS)
Advertisement
When President Donald Trump arrives in Israel next week, Prime Minister Benjamin Netanyahu will have the opportunity to make specific requests from the administration.These are the key issues Israel is expected to bring up with the US.1) Keep the pressure on IranIn the coming days, we will see if Trump waives sanctions on Iran and allows Tehran to keep funding its military assistance to Bashar Assad in Syria and Hezbollah in Lebanon.While Israel does not want to see Iranian funds freed up to meddle more in Syria, Lebanon and Gaza (which would seriously endanger the country's security), it also does not want the nuclear deal to fall apart prematurely (or if it does, only due to an Iranian violation, not a US failure to meet an obligation), lest Iran be free to dash to the bomb even sooner than Israel worries it will. In general, Israel wants to ensure that it is on the same page with the administration regarding the continued pressure that must be applied on Iran to curb the latter's development of ballistic missiles and support of terrorism.During a press conference last month with visiting US Secretary of Defense James Mattis, Defense Minister Avigdor Liberman urged the administration to “place more pressure and sanctions on the Iranian regime.”
Netanyahu hails "new day" in Israel-US relations after meeting with Trump (credit: REUTERS)
2) Stabilizing Syria and recognizing Israel’s sovereignty over the Golan HeightsIsrael has two requests regarding Syria. Firstly, it wants to ensure that its security interests are accounted for in any deal that Trump would reach with Russia aimed at ending the civil war in the country.Specifically, Israel wants to make sure that Iran and Hezbollah will not remain in Syria at the end of the war and will not be allowed to establish a presence on the Syrian side of the Golan Heights.Israel's second demand has to do with its control over the Golan Heights. The premier is seeking recognition from Trump for Israel’s sovereignty over the Golan, which was conquered 50 years ago during the Six Day War. This came up during the two leaders' meeting at the White House in February and was also reiterated last week by Intelligence Minister Israel Katz, who proposed that Jerusalem and Washington reach a five-pointed understanding on the issue of the Syrian civil war and the implications it has on Israel's security. 3) Move the embassy to JerusalemThis seems to be the most contentious issue in the dialogue between the two governments. On Sunday, Secretary of State Rex Tillerson doused flames on the eventuality of the embassy being moved to Jerusalem, telling a US interviewer that the decision "will be informed by the parties involved in those talks – and most certainly Israel’s view – and whether Israel views it as helpful to a peace initiative or perhaps a distraction."Netanyahu was quick to respond, saying that by moving the embassy, Trump would actually be advancing the peace process by smashing the Palestinian fantasy that Jerusalem is not Israel’s capital. The US president made the promise to move the embassy during his campaign and after he was elected, there were reports that an announcement would happen in the first days of his administration.The premier is expected to use Trump’s visit next week to pressure him on the issue. The simplest way to advance would be for Trump at the end of May to not waive a Congress law from 1995 that mandates the embassy be in Jerusalem. US presidents have signed waivers to the law every six months since its passage.4) Settlement construction and protection of Israel’s interests in potential peace talks with the PalestiniansTrump seems determined to restart peace talks between Israel and the Palestinians and while he will likely refrain from getting the leaders together during his trip next week, he will try to convince the sides to reengage with one another.Israel will seek to impress upon Trump the difficulty in reaching a deal based on the Palestinian demands of 1967 lines, the right of return and Jerusalem as the Palestinian capital. Israel will also work to convince Trump of the need for a future Palestinian state to remain demilitarized.Lastly, Netanyahu has been trying since his trip to the White House in February to reach understandings with the administration over Israeli settlement construction. Netanyahu reportedly postponed a meeting of a settlement planning committee last week until after Trump’s visit to not infuriate the president.Netanyahu would like a green light from the president to be able to build in all of Jerusalem as well as in the settlement blocs. He fears having to agree to a new settlement freeze that could prompt Bayit Yehudi to pull out of his coalition. 5) Retain Israel’s Qualitative Military Edge in the regionTrump is expected to approve a massive sale of approximately $100 billion worth of arms to Saudi Arabia. While Israel backs military support to the Saudis and other Gulf States, which are all aligned against Iran, it is in constant talks with the White House and the Pentagon about ways to ensure that it retains its QME in the region by always being the first to receive superior American weapons systems and munitions.Israel is currently in talks with the Pentagon about how it plans to spend the $38 billion new military aid package signed at the end of Barack Obama’s presidency. The Jewish state is expected to seek permission from its biggest ally to purchase new transport helicopters, smart bombs, bunker busters, more F-35 stealth fighter jets as well as an assortment of additional weapon and intelligence systems.