What's that owl doing strapped to the chest of an Israeli Border Police officer?

"Protecting the environment and animals is an integral part of our job," officer says. 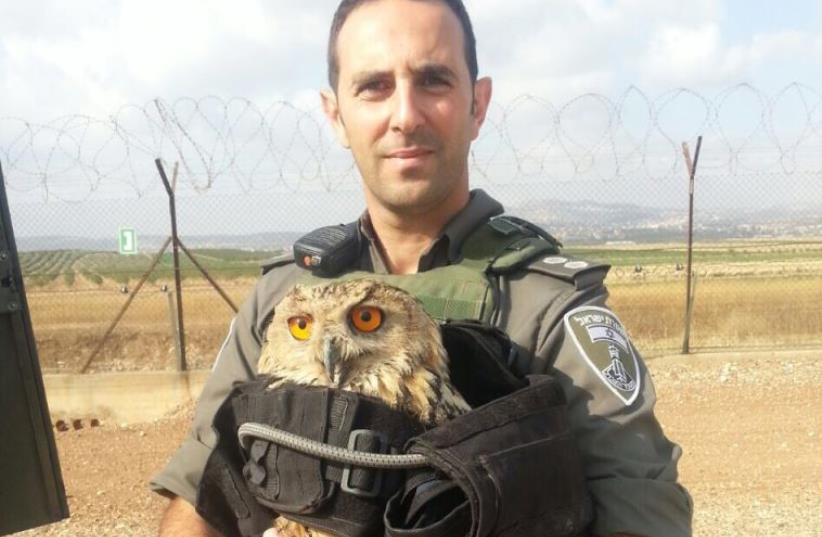 Border Police officer with injured owl
(photo credit: POLICE SPOKESPERSON'S UNIT)
Advertisement
During a patrol of the West Bank security barrier near Jenin on Saturday, Border Police forces came across an injured female owl that could not take off and immediately took action. "As soon as I saw the suffering owl I took off my protective vest, and picked the bird up to evacuate it for treatment," George Daviri said on Saturday. George was the commanding officer of the Border Police unit at the time of the run-in with the owl. The Parks and Nature Authority was contacted and it advised the police that they were carrying an eagle-owl, that can weigh as much as three kilos and has a wingspan of over two meters making it one of the largest predatory birds in Israel. "The owl found is the largest nocturnal predator in Israel. The police brought the owl to us with a serious cut to its wing and with other minor bruising," Elishai Ben-Yannay a supervisor with the Israel Nature and Parks Authority said on Saturday. "We hope that after treatment to the wing we'll be able to release the owl back to nature," Ben-Yannay added.  Ben-Yannay said that if the police had not found the owl, there was no doubt in his mind that that it would have died. The owl was evacuated immediately to the Israeli Wildlife Hospital and Rehabilitation Center, located at the Ramat Gan Safari outside of Tel Aviv where it received treatment and was undergoing tests. It will stay at the hospital until its injuries are fully healed at which time she will be released back to nature. "Protecting the environment and animals is an integral part of our job and in my opinion are no less important than the other missions that we carry out as fighters," George said.