The conditions of Pollard's parole have not yet been released but they are expected to include a ban on him leaving the US for five years and he is to be forbidden from giving interviews. 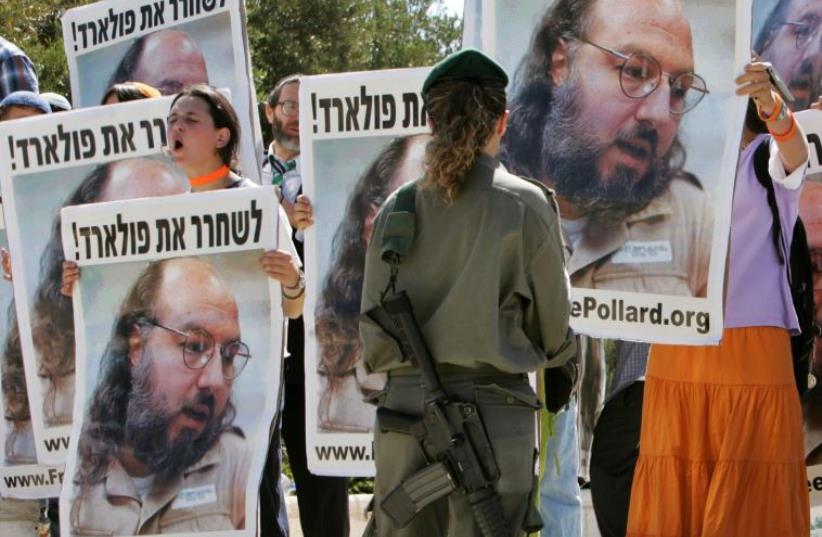 Israeli protesters hold posters of Jonathan Pollard, who was convicted for spying on the United States in 1987, in front of the Israeli Prime Minister's office in Jerusalem June 19, 2005
(photo credit: AMMAR AWAD / REUTERS)
Advertisement
US president Barack Obama will not take action to enable Israeli agent Jonathan Pollard to move to Israel following his expected parole in less than two weeks, Obama's deputy national security adviser for strategic communication Ben Rhodes told Israeli reporters in a briefing late Thursday night.Pollard is set to be released from prison after serving 30 years of a life sentence for passing classified information to an American ally on November 20, the US Parole Commission announced July 28. The conditions of Pollard's parole have not yet been released but they are expected to include a ban on him leaving the US for five years and he is to be forbidden from giving interviews.It was still unclear Saturday whether Pollard's release will take place on Friday November 20 or on Saturday November 21, 30 years since his arrest. Pollard keeps Shabbat but it was unclear whether he will be released Friday to enable him to spend Shabbat outside of prison.When Pollard's parole was announced, his lawyers, Eliot Lauer and Jacques Semmelman, wrote that Obama has the constitutional power of executive clemency, which grants him the authority to commute Pollard's sentence to time served and allow him to leave the United States and move to Israel immediately. They urged the president to exercise that power.But Rhodes made clear when asked by reporters that Obama would not take such action on Pollard's behalf, saying that the president does not interfere in American legal procedures."President Obama has not intervened in the judicial process here in the United States, and that's been his consistent approach," Rhodes said. "With respect to the case of Jonathan Pollard, he’s made clear that he wants there to be fair treatment under the law, as there should be with any individual. But he as President has not intervened in that process. He respects how important this issue is to many Israelis. I wouldn’t be surprised if the Prime Minister raised this. That's obviously his determination. But again, that's been the approach that the President has taken."Obama has commuted sentences of 89 people during his presidency, more than any American president since Lyndon B. Johnson. He has granted full pardons to another 64 people.Most of the convicts who received clemency from Obama were drug dealers and thieves. When he has announced commutations, he has said that the sentence of the convicts did not fit their crime. Obama is expected to announce more commutations later this month in honor of the Thanksgiving holiday.The official Pollard campaign and the caucus for Pollard in the Knesset declined to respond to Rhodes' comments, saying that they were not new."We have made a strategic decision not to intervene at this stage," said the head of the caucus, MK Nachman Shai. "After he's out of prison, we can struggle for him to be able to move here."