Why did it take Israel's vaunted security forces a week to find Tel Aviv gunman?

The turning point in the investigation came on Tuesday, when Milhem's father was arrested and brought in for questioning. 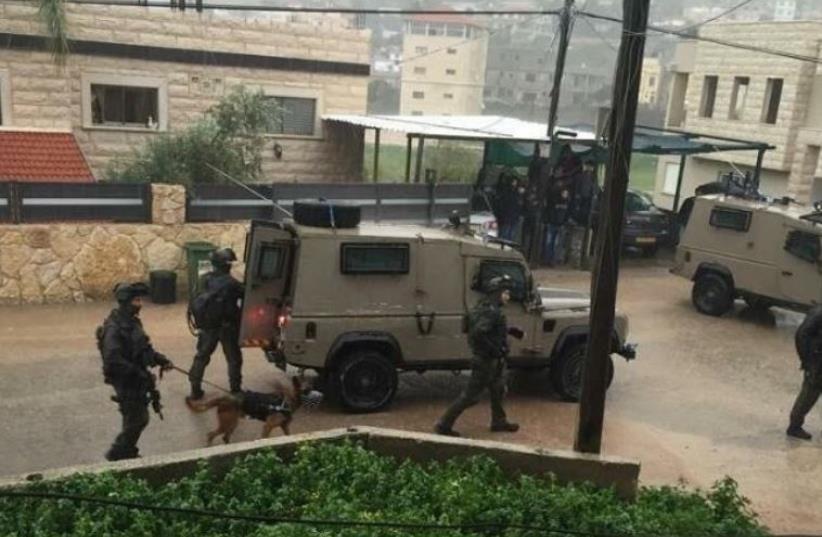 Security forces search for Nashat Milhem in the Israeli Arab village of Arara
(photo credit: Courtesy)
Advertisement
It took an entire week for the police and the Israel Security Agency (Shin Bet) to track down Nashat Milhem, the gunman who carried out the deadly New Year's Day shooting in central Tel Aviv. This was an intense manhunt that was laid bare for all to see on live television, Internet sites, and, in particular, social media.It was a seven-day dragnet that partially focused on the scene of the shooting. In hindsight, however, it is becoming clear that the searches in Tel Aviv were for naught as fascinating details emerge in the initial hours following Milhem's demise.It was learned that Milhem hid in at least two places – a mosque and the home in which he was eventually found and shot. Authorities also announced that the gunman fled Tel Aviv immediately after carrying out the Dizengoff attack and the murder of the cab driver from Lod.It was also discovered on Friday that Nehemia Feinblat, an attorney representing the Milhem family, learned of the gunman's whereabouts from one of the fugitive's relatives who saw him in Arara.The lawyer told Channel 10 on Friday that he informed the police and the Shin Bet on the whereabouts of the Tel Aviv gunman at the request of his clients."I knew the neighborhood in which he was captured and I reported it to the Shin Bet at the request of the father, Muhammad Milhem," he said. 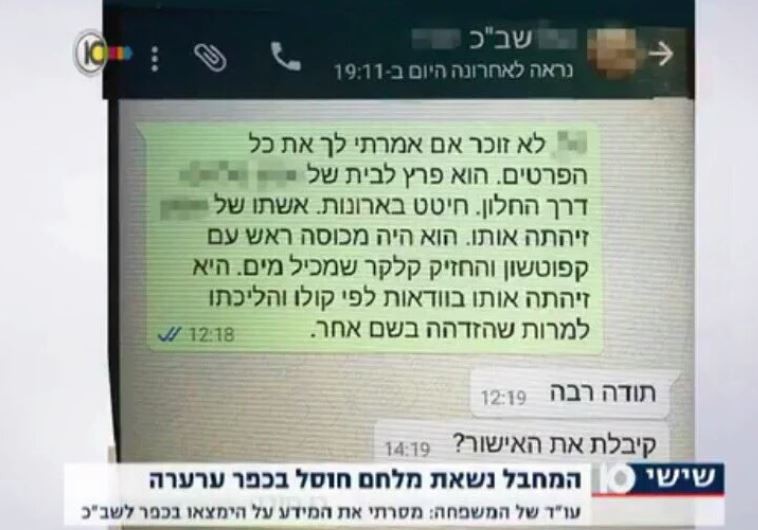 The text message sent by the Milhem family attorney to the Shin Bet, which led to the gunman's hiding place. (Channel 10)The turning point in the investigation came on Tuesday, when Milhem's father was arrested and brought in for questioning. The fact that the father did not cooperate with the investigation stunned the authorities, who came to the realization that perhaps the gunman was in hiding at a location closer to his home than near the scene of the attack. As a result, the focus of the search shifted to Wadi Ara. On the same day, search and rescue dogs from the elite canine unit Oketz stumbled upon the key piece of evidence. While Milhem knew how to hide, he did not take care to remove remnants of his excrement. The dogs sniffed out pieces of feces nearby, and the samples were sent to a laboratory. The DNA tests confirmed that the feces did indeed belong to Milhem. That prompted the security forces to descend on the family's home. At this point, investigators began to suspect that the Milhem family was leading them astray.Once the media began to report that the search for the gunman no longer centered on Tel Aviv but had moved to Wadi Ara, the police began disseminating disinformation according to which Milhem had fled to areas controlled by the Palestinian Authority and that the searches near his home were strictly for intelligence-gathering purposes.This disinformation campaign reached a climax just before sundown on Friday, when police radios began to report that there was a terrorist on the loose in Tel Aviv. These reports were picked up by various users of WhatsApp, who began to pass word along. Suddenly, a long line of police cruisers were driving toward Tel Aviv, and the news media was preparing to report these developments. It was only an hour later that the police released a statement saying that there was no terrorist in Tel Aviv and that the increased presence was simply a byproduct of a situational assessment.Behind the scene, the senior echelons of the police force were begging journalists to refrain from reporting about the Arara searches. While all of the press attention was focused on Tel Aviv, the Shin Bet managed to pinpoint the exact location of Milhem's hiding place. Police used search dogs to expedite the arrest.According to initial reports, a canine office and his dog sniffed out Milhem, who fired gunshots after his hiding place was discovered. Police anti-terror units surrounded the building in which he was hiding, calling on him to surrender. Milhem, however, had no intention of going quietly. He tried to flee and was shot dead outside of the building. Four bullets pierced his flesh, putting an end to his life and to the manhunt.