The exhibition on display at the Museum of Contemporary Art in Krakow included a video installation in which naked people play tag inside a gas chamber. 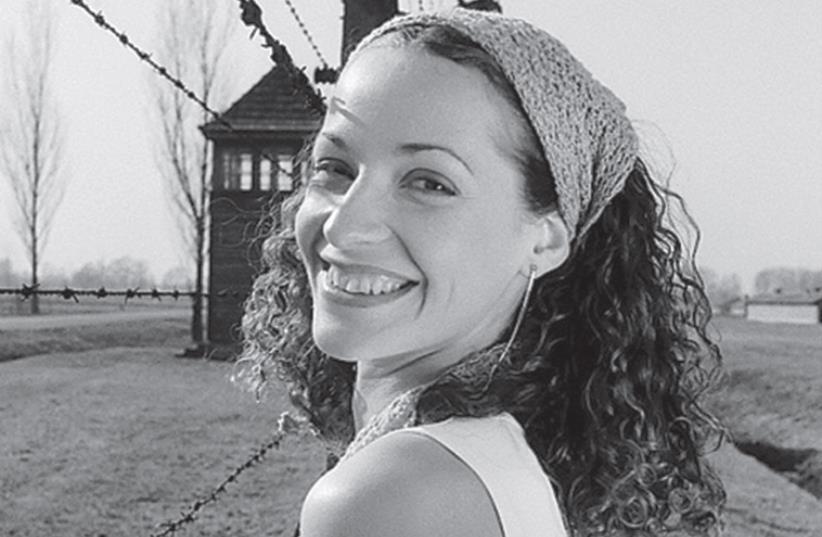 GERMAN ARTIST Sarah Schonfeld poses next to the perimeter fence at Auschwitz. Her work is part of the controversial exhibit at the Krakow Museum of Contemporary Art titled ‘Poland – Israel – Germany: The Experience of Auschwitz.’
(photo credit: Courtesy)
Advertisement
The Foreign Ministry came under attack from an unusual direction on Monday, as the Simon Wiesenthal Center denounced its involvement in a Polish art exhibition that some believe trivializes the Holocaust.The exhibition, “Poland – Israel – Germany: The Experience of Auschwitz,” on display at the Museum of Contemporary Art in Krakow, showcases a number of works that have raised Jewish hackles, including a video installation in which naked people play tag inside a gas chamber.“We were quite shocked and disturbed to hear that this exhibition, which includes one of the most offensive and disgusting videos relating to the crimes of the Holocaust, is being run in partnership with the Israeli Embassy,” Dr. Efraim Zuroff, the center’s chief Nazi hunter, told The Jerusalem Post.“I find it hard to believe that any Israeli ambassador could approve an exhibition which includes such offensive works. The fact that [the video] was banned in Germany and quickly removed in the wake of our protests and that of the Jewish community in Estonia clearly proves that there is a general consensus that this supposed work of art is not fit for public viewing.”In February, the Tartu Art Museum in Estonia publicly apologized for featuring the installation, requesting forgiveness for having “unintentionally insulted the local Jewish community by exhibiting these artworks.”In 2011, it was pulled from a Berlin gallery after local Jews voiced protests.The Polish exhibition, which is slated to come to Israel after its run in Krakow, features a number of Israeli artists alongside their Polish and German counterparts. One of those featured is Australian Jane Korman, most famous for a filming herself and her grandfather, a Holocaust survivor, dancing to the song I will survive at Auschwitz.In a statement, the Foreign Ministry panned the video, calling it “disgusting” and a “cynical provocation.”“Unfortunately, some of the exhibits are of a provocative character, which is not appropriate for the memory of the Holocaust and [which] aim to cause scandal and attract attention,” the ministry said.“There is no place for blatant provocations when we are dealing with the Holocaust.”While the ministry pledged to do everything possible to have the video removed and said its representatives in Poland had been instructed to work to that end, it did not condemn or distance itself from the show as a whole.In response, Zuroff said that while he welcomes any step taken to remove the video from the exhibition, the government’s reaction to the controversy was indicative of either “a disconnect between Jerusalem and Warsaw or …an attempt to cover up a sad oversight or lack of judgment.”The promotional materials for the exhibition – which showcase German artist Sarah Schönfeld smiling near one of Auschwitz’s iconic guard towers – are particularly egregious, said Jerusalem attorney David Schonberg, who wrote to Deputy Foreign Minister Tzipi Hotovely demanding Israel withdraw its participation.It was “particularly jarring in its juxtaposition of a happy smiling face next to perhaps one of the greatest symbols of ultimate evil and barbarism perpetrated against humanity,” he lamented.Several local groups have written directly to both the museum and the mayor of Krakow to voice their objections, he said.Yad Vashem also added its voice to the protest, sending a letter to the director of the museum, the mayor of Krakow, the Polish ambassador to Israel, and Israel’s ambassador to Poland.“While Yad Vashem is, of course, committed to freedom of expression, including artistic self-expression, and we generally refrain from involvement in debates regarding the propriety of specific works, we consider this case to be exceptional and requiring particular sensitivity on your part. I recommend that you reconsider your policy in this matter, and urge you to remove the video presentation “The Game of Tag” from your exhibition,” wrote Yad Vashem chairman Avner Shalev.According to Colette Avital, chairwoman of the Center of Organizations of Holocaust Survivors in Israel, the embassy explained that it was automatically added to the list of partners when it sponsored the trip of an Israeli artist participating in the show and that Israel thought it was acceptable to give its patronage to the exhibit given the number of its citizens taking part.Avital said she believed the embassy was unaware of the content of the exhibition when it first became involved.She added, however, that “giving your patronage to an exhibition shouldn’t be automatic” and there should have been better oversight.Calling the tag video “pornographic,” she said Israel should withdraw its support for the exhibit if it is not removed and asserted that Ambassador Anna Azari should have “opened her mouth and protested” at the official opening.While artists have a duty to provide critical commentary on the surrounding society, it is hard to understand who is being critiqued here, she said, stating that “the whole exhibition is making fun of the Holocaust.”Polish Chief Rabbi Michael Schudrich also vociferously condemned the exhibition.“We believe in freedom of expression.We believe even more deeply in sensitivity toward Holocaust martyrs and this exhibition fails to understand this important value,” he told the Post.Contacted by the Post, a spokeswoman for the museum explained that the exhibit is intended to “highlight the significant presence of the theme of Auschwitz in the historical, social, and cultural discourse and to demonstrate how contemporary artists from Poland, Israel, and Germany interpret the past events.”“We are not trying to present art related to Holocaust, but rather to present the way how second and third post-Auschwitz generations feel to carry the memory of these tragic events. [The video] was chosen to be displayed, but regarding some comments on this artwork we are considering changing the form of its display.