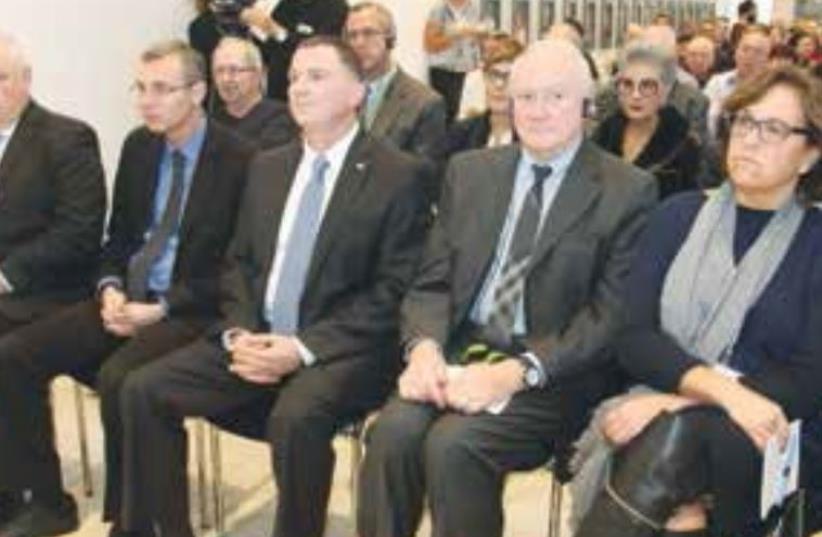 AT YESTERDAY’S Knesset ceremony sit (from right) Rabbi Abraham Cooper, Canadian Ambassador Vivian Bercovici, UNESCO official Francesco Bandarin, Knesset Speaker Yuli Edelstein, and MK Yariv Levin.
(photo credit: ISAAC HARARI)
Advertisement
The best way to counter Israel’s enemies is by “telling the truth,” according to Rabbi Abraham Cooper, associate dean of the Simon Wiesenthal Center.He made the comment as he introduced the Simon Wiesenthal Center-UNESCO exhibition, “People, Book, Land: The 3,500-Year Relationship of the Jewish People to the Holy Land,” at the Knesset.“In 2015, Israel is under constant assault in an asymmetrical war to demonize, delegitimize and deny her history, deny her values, deny her very right to be counted as an equal among the nations,” said Cooper.“All Jews are targets, from the streets of Jerusalem to the campuses of our universities. How should lovers of Zion respond? By telling the truth, the truth about an unparalleled love affair between the people and its homeland.”Cooper paid tribute to the author of the exhibition, the late scholar of anti-Semitism Prof. Robert Wistrich, whom he called “a truth-teller.”“Our truth-teller, of blessed memory, was a respected scholar and a prolific author. For decades, armed only with the truth, Robert took on intellectual anti-Semites and a world largely apathetic to history’s oldest hate.”He also thanked UNESCO assistant director- general for culture Francesco Bandarin and Canadian Ambassador Vivian Bercovici for attending the special event, as well as Knesset Speaker Yuli Edelstein for hosting it.“Seventy years after the Second World War, anti-Semitism is on the rise, fueled by prejudice and ignorance,” Bandarin said.“Against ignorance and hatred, against racism and anti-Semitism, we must also respond, with stronger knowledge and education. Understanding history is a starting point for peace.”It is the first time that the United Nations, via UNESCO, has sponsored a globe-trotting exhibit that outlines – in thematic posters – the historic raison d’etre for the UN decision to recognize a Jewish homeland in Palestine in 1947. It is due to open in the Vatican on Wednesday.“This demonstration highlights prominent figures and events in our history, demonstrating the activity between the Jewish people and their homeland,” Edelstein said.“This bond is a bond in every sense of the word. Empires and peoples have finished, but not only did the Jewish people survive and preserve their place on the global stage, they even reclaimed their land.”Edelstein was presented with a Torah pointer to acknowledge his visionary leadership, while the Simon Wiesenthal International Leadership Award was given to Danielle Wistrich in memory of her late husband, Prof. Robert Wistrich, and to anti-Semitism scholar Dr. Manfred Gerstenfeld, a regular contributor to The Jerusalem Post.Wistrich, who also was a columnist for the Post, sent in his last column a few days before he died in Italy on May 19 this year at the age of 70.