Witness to Bastille Day massacre: 'It was like a horror movie'

Rubio, 26, was visiting the French Riviera city on his way back to the US from Israel when the brutal attack that killed up to 84 people occurred. 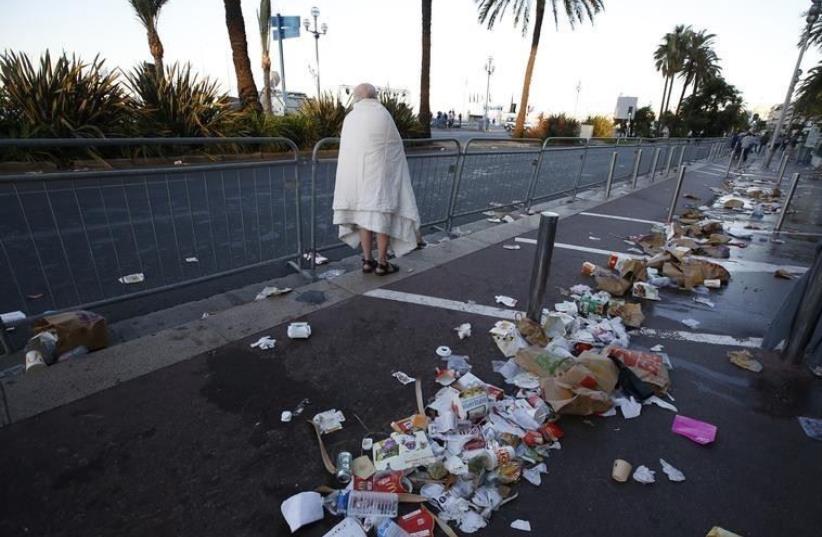 A man walks through debris scatterd on the street the day after a truck ran into a crowd at high speed killing scores celebrating the Bastille Day July 14 national holiday on the Promenade des Anglais in Nice, France, July 15, 2016.
(photo credit: REUTERS/ERIC GAILLARD)
Advertisement
“We heard what sounded like a train coming down the road and we looked up and saw it was a truck zooming down the boardwalk at like 50 to 60 miles per hour, and it was hitting people while going down the road,” recounted former Israel resident Juan Rubio, a witness of Thursday night’s fatal terror attack in Nice, France.
Rubio, 26, was visiting the French Riviera city on his way back to the US from Israel when the brutal attack that killed up to 84 people occurred.
He was at the beach watching Bastille Day fireworks among revelers when an armed terrorist drove a heavy truck through crowds gathered for the festivities. Police eventually shot dead the truck's driver, who was later identified as a 31-year-old Frenchman of Tunisian origin.
“We were on the beach when we saw the truck come rolling down the promenade, hitting countless people along the way,” he wrote in a Facebook post Thursday, marking himself and three others as safe. “It's a really sad situation, dozens of people dead and injured on the sidewalk for blocks.”
Speaking to The Jerusalem Post on Friday, he said, “It’s like something out of a horror movie.”
“We were like 10 feet away from the promenade where the attack took place,” Rubio said, noting that he had been located near the end of the deadly ramming’s route.
“The truck went down for about a mile, and we were at the tail-end, at the last 100 feet or so,” Rubio said of the shocking event.
He said the incident started after the fireworks ended, noting that there were masses of people on the boardwalk and the nearby beach.
“If we had decided to leave the fireworks earlier, even a minute early, we would have been up there [on the boardwalk],” he told the Post by phone.
When it started to happen everyone fled from the boardwalk toward the beach, Rubio said. He explained that his partner had lost his phone and so he went to search for it on the boardwalk. When he ascended from the beach to promenade, he witnessed the destruction from the horrendous attack.
“There were at least 15 causalities in my area,” he lamented.
He mentioned that initially he had heard of a rising death toll of up to 30 people, “but there were definitely more people than that.”
He explained that the fire marshal and emergency response crews made the crowds stay on the beach while they tended to the scene. Rubio said that the bystander were eventually allowed to leave the vicinity, but were urged to keep their eyes down and look away from the harrowing aftermath of the attack.
The Los Angeles native added that his cousin, who lived closer to the local airport, where the ramming apparently started, saw scores of people and body parts in the wake of the terrorist’s destructive path on her way to find Rubio.
“I’ve never had anything like this happen to me in Israel,” he said in disbelief.
After living in Israel for three-and-a-half years, Rubio said he was shocked to see something like this happen in France .
“Terrorists try to make people feel unsafe in the seemingly most secure places -
in America and France their guard is down, they don't expect things like this like they do in Israel,” he noted.
However, Rubio asserted that he wanted to share his experience in hopes to help others around the world understand the gravity of terrorist attacks, and so that the issue will not be ignored.
“I’m not going to stop my life,” he said defiantly as he waited to board a pre-planned flight to Paris. “For me, in my mind, it gives them [terrorists] more power if I stop my life.”