The Commitment Awards, in its second year, recognizes individuals who address the needs of others through social activism. 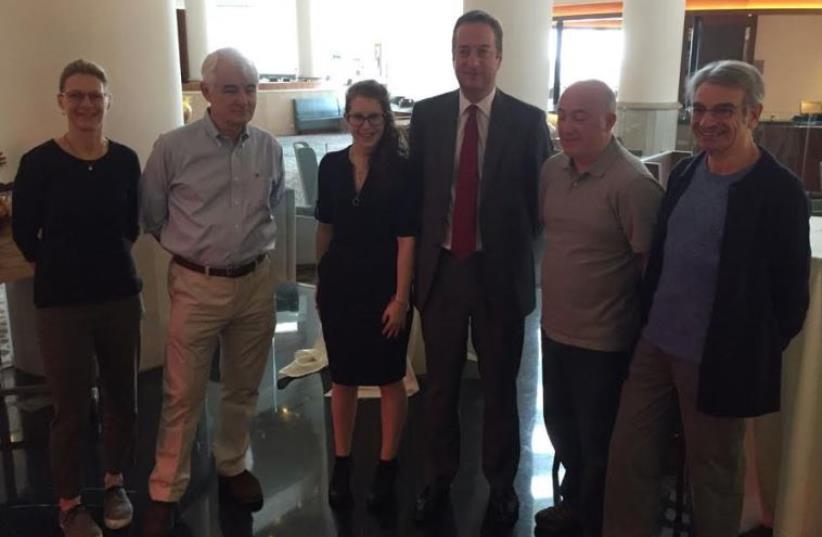 Winners of the WIZO UK Commitment award with Ambassador David Quarrey in Tel Aviv
(photo credit: COURTESY WIZO)
Advertisement
Leaders of the World Women’s International Zionist Organization federation in Britain (WIZOUK) arrived in Israel this week accompanied by the six winners of the 2016 WIZOUK Commitment Awards.The Commitment Awards, in its second year, recognizes individuals who address the needs of others through social activism.This year’s winner included: Fusion Gateways, a vocational education developer; Martin Vegoda, a facilitator of interfaith dialogue; Avi Djanogly, a revolutionary in the field of water-conservation; Deborah Gundle, the founder of an online resource for people with learning disabilities; volunteerism activist Orli Shoshana West, and John Ware, a BBC-affiliated investigative journalist."WIZO is delighted to be able to acknowledge the part played by many socially-aware groups and individuals who work for the betterment of others. The award-winners will be able to see how their work and achievement is echoed at our projects and throughout the State of Israel," said Lorraine Warren, president of WIZOUK.Each year, the general public nominates entrants to the awards process and a committee of judges selects winners in six categories: social betterment, education, diversity and tolerance, media, environmental innovation and high-tech.As a prize, the six award winners are taken on a tour of Israel, giving them a look at the country through the lens of WIZO - a 95-year old women’s movement founded on values of Zionism, volunteerism and social betterment. The trip aims to grant the winners, who are not necessarily Jewish, a first-hand look at Israel behind the headlines and also aims to serve as a response to the growing phenomenon of anti-Israel de-legitimization in the UK and around the world.As part of the visit the winners toured the Weizmann Institute of Science and Peres Peace Center as well as tourist attractions, WIZO women's shelters, day care facilities and community centers - some of which receive financial support from British WIZO volunteers and donors.