‘Women, if you want a career badly enough, you’ll get it’

Women from different walks of life and some from backgrounds that held no promise responded to an invitation from First Lady Nechama Rivlin to come to the President’s Residence on Tuesday. 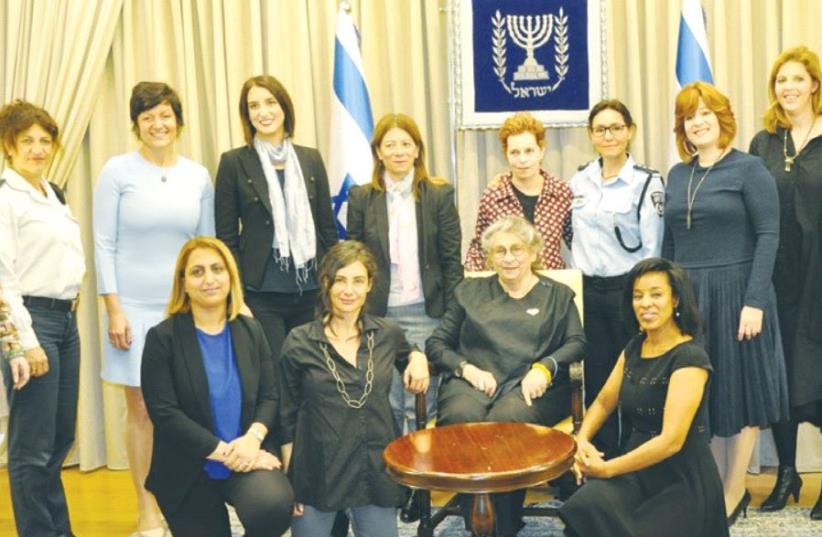 FIRST LADY Nechama Rivlin (center, seated) invited women from varying backgrounds and fields to share their success stories during a gathering at the President’s Residence.
(photo credit: TAMAR REICHMAN)
Advertisement
Adapting Herzl’s mantra of “If you will it, it is no dream” from his vision of a Jewish state, women from different walks of life and some from backgrounds that held no promise responded to an invitation from First Lady Nechama Rivlin to come to the President’s Residence on Tuesday and share their experiences. The meeting occurred ahead of International Women’s Day on Wednesday.They included public servants, high-ranking officers from Israel’s security establishment, a sports champion, representatives of the arts, medicine, education, the communications media, banking and more.They also represented different sectors in Israel’s demographic makeup: Sephardi, Ashkenazi, Haredi, Arab, Druse and Ethiopian.From the latter group, Tel Aviv Deputy Mayor Mehereta Baruch-Ron was born in an Ethiopian village and at the age of 10 came to Israel with her parents and two of her sisters via Sudan. She quipped that she tells people she is the black deputy mayor of the White City.Nurit Dabush, chairwoman of the Israel Bar Antitrust Committee and of Bank Yahav, among other positions, was one of eight siblings who grew up in Ashkelon in a household in which the parents were not equipped to push their children into white collar careers. Dabush always told herself to concentrate on what she could do and not what she couldn’t.All the women were somewhat nervous. Most did not know each other previously.Nechama Rivlin confessed that she, too, was nervous and said that before coming to the President’s Residence, she was fearful that she would be unable to fulfill the role of the president’s wife. She was not exactly young, she said, and she has a health problem that requires her to walk around with a small oxygen tank.But once she was ensconced, she came into contact with some of the most wonderful people she would not have met under other circumstances, she said.Sigal Bar Zvi, commander of the Ayalon District Police Force and the first woman to be appointed as such, said she had never been to a women’s forum before and had been most impressed by the achievements of other women present. She was somewhat wild before going to the army, she said, but the IDF straightened her out. Otherwise she could have easily become a criminal, she admitted. Instead, she joined the police force and for four years worked in undercover operations.Basketball champion Naama Shafir, who is religiously observant, had a tough time because she would neither play nor practice on Shabbat, and she would eat only kosher food. Moreover she refused to wear tank tops and wore T-shirts with sleeves, which initially had sports writers making fun of her. But she persevered and did not allow anything or anyone to break her spirit.When Ghadir Kamal Meriah became the first Druse woman to present news on television in Arabic and Hebrew, it was considered so unusual that in addition to it being widely reported in the Hebrew media, it was also reported in Ramallah, in Lebanon and Egypt. More conservative members of her community encouraged her stay home like other Druse wives, but she wanted to be her own person, and her husband and other family members encouraged her. But the best thing that happened was when Druse spiritual leader Sheikh Muafak Tarif called her and said he was proud of her.Sari Roth, a CEO and cofounder of an Israeli start-up hi-tech company, is a haredi mother of seven. She found a partner in the haredi community, a total autodidact “who knows everything there is to know about technology.” Later, she got more investors. Now, it annoys her when interviewers write that despite being haredi and a mother of seven, she has established a successful hi-tech start-up. It’s the start-up that’s important, she said, not who she is.When asked by The Jerusalem Post whether she thought it was time for haredi girls to receive more secular education, she replied that haredi girls are much better educated than secular people realize. She has a daughter who is a computer programmer.The women were all excited after the meeting, telling each other how inspiring each woman’s story had been.