Chief Rabbi of Western Wall accuses Women of the Wall of violating agreement with government; group says that not reading from Torah was part of a deal they "could not accept." 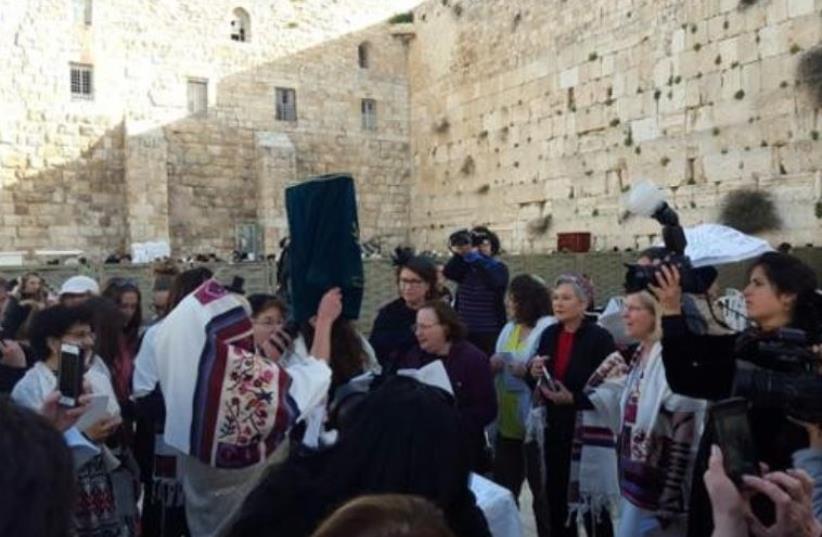 Women of the Wall with Torah scroll in women's section of the Western Wall, March 11, 2016
(photo credit: WOMEN OF THE WALL)
Advertisement
The Women of the Wall organization brought a Torah scroll into the Western Wall women’s prayer section for its prayer service for the new Hebrew month on Friday, leading to accusations by the administrator of the site that the group violated the recent agreement for creating a pluralist prayer space.A deal reached between WoW and the non-Orthodox denominations with the government last week will create a large prayer space designated for non-Orthodox or pluralist service at the Robinson’s Arch area at the southern end of the Western Wall.The agreement states that WoW can continue to use the current women’s section of the main plaza for its services until the new prayer area is complete, but states explicitly that “the expectation [is] that the worship not include reading from the Torah.”Regulations drafted by Rabbi Shmuel Rabinowitz, the rabbi of the Western Wall, in 2010 and approved by the Justice Ministry, prohibit anyone from bringing a private Torah scroll into the Western Wall Plaza, and the rabbi has refused requests by WoW to use one of the Torah scrolls made available in the men’s section.“This act proves again that their goal is only provocation and defiance, quarreling and dispute and a desecration of God’s name, and no agreement or compromise offered to them will help in the face of this goal,” said Rabinowitz.The rabbi called on Religious Services Minister David Azoulay of Shas to approve the new regulations stipulated in the agreement which define the main Western Wall prayer area as a place for Orthodox prayer alone, “without connection to the implementation of the agreement, in light of the actions of this provocative group.”Shira Pruce, a spokeswoman for Women of the Wall, said the group had always said it “would not give up the right to read Torah,” and noted that the agreement said that it was “an expectation” that Women of the Wall not read from the Torah in the women’s section, “and not an iron-clad undertaking.”“It is our intention to read Torah in the women’s section until the establishment of the new pluralist section,” Pruce told The Jerusalem Post.“There are no circumstances in which Women of the Wall will give up right to read Torah. We understand that this is an expectation, but it is one point that Women of the Wall could not accept.”Pruce noted that Azoulay is yet to sign the new regulations governing the main Western Wall prayer area and the new pluralist prayer space, as was supposed to happened 30 days of the signing of the agreement, according to WoW and the non-Orthodox movements.She also criticized Rabinowitz and Azoulay for statements made since the agreement was signed which she said have incited other worshipers at the Western Wall against Women of the Wall.The Women of the Wall prayer group was subjected to continuous yelling and screaming during its Friday service, Pruce said, adding that the police had been negligent in not removing women shouting at the group for disturbing the peace.“Today was a tough day to be a woman at the Western Wall,” she said.