Rivlin explained that “the world looks differently these days at women’s sports,” and cited the excitement over the US women soccer team's World Cup victory. 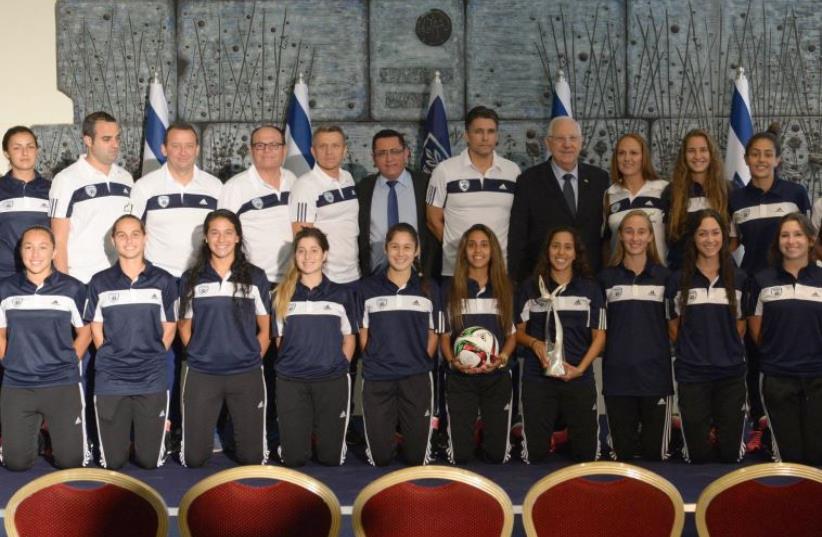 Israeli women’s football team gets pre-championship blessing from number one fan Reuven Rivlin‏.
(photo credit: Mark Neiman/GPO)
Advertisement
Just a few days ahead of the start of the UEFA European Women’s under 19 Championship Finals which are being held this week in Israel, members of the Israeli team came to the President’s Residence on Monday to receive a blessing from their Number One fan Reuven Rivlin who shook the hand of each player and told them that they were the ambassadors not only for women’s sport but for Israeli women’s sport. “The world looks differently these days at women’s sports,” he said.Rivlin commented that the importance of women’s sport and women playing what used to be a man’s game can be gauged from a breaking news story last week in which it was announced that  the US women’s soccer ream has won the World Cup championship.For such a story to be breaking news, he said, was indicative of the fact that more importance is being attached to women playing sport in general and to women playing soccer.The team was accompanied by its officials and by Ofer Eini the chairman of the Israel Football Association.Rivlin congratulated Eini for persuading UEFA to hold the championship in Israel and told the team members that he had every confidence in their ability to demonstrate both their athletic prowess and their sporting character,. “We were always outstanding with our women athletes,” he said and cited Yael Arad as the first Israeli to win an Olympic medal.Team captain Sahi Pearl presented Rivlin with an autographed soccer ball.