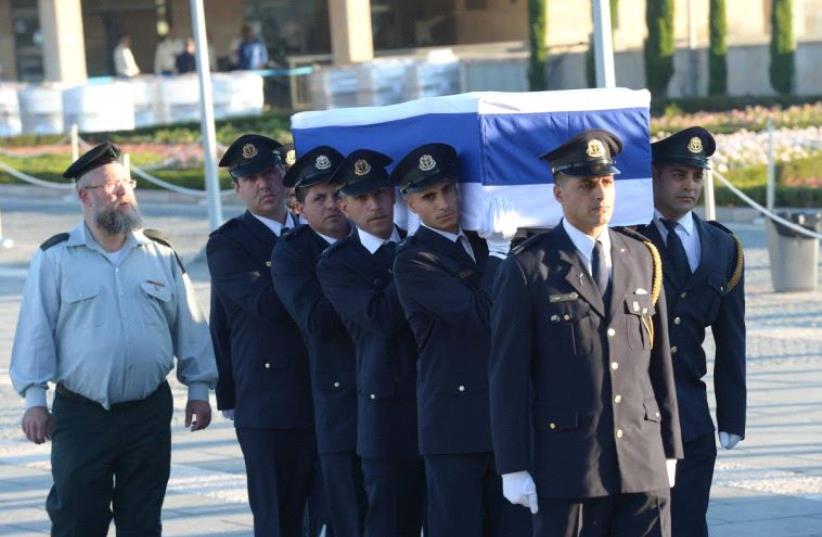 Peres coffin at the Knesset
(photo credit: AMOS BEN GERSHOM, GPO)
Advertisement
Mahmoud Abbas will be among the dozens of world leaders attending Friday’s funeral for former president Shimon Peres on Mount Herzl, though he is not on the small list of leaders with whom Prime Minister Benjamin Netanyahu will meet privately.Abbas will head a delegation of four senior Palestinian officials.This will be his first visit to Jerusalem since his last meeting at the Prime Minister’s Residence with Netanyahu in 2010.Presidents, kings, princes, prime ministers, foreign ministers, defense ministers, science ministers and other senior officials from more than 70 countries – more than one-third of the nations in the world – will attend the funeral.Abbas on Thursday asked the Coordinator for Government Affairs in the Territories (COGAT) unit, the branch of the IDF responsible for coordinating civil and security affairs in the West Bank and the Gaza Strip, for permission to attend the funeral. COGAT passed the request along to Netanyahu, who approved it.Abbas will be accompanied by PA General Intelligence chief Majid Faraj, PLO Executive Committee Secretary-General Saeb Erakat, Minister of Civil Affairs Hussein al-Sheikh and Palestinian Committee for Interaction with Israeli Society head Muhammad al-Madani.Netanyahu began a series of meetings on Thursday night with some of the dignitaries attending the funeral, holding a discussion in his private residence with former US president Bill Clinton, followed by a meeting with EU foreign policy chief Federica Mogherini.No private meeting has been scheduled with US President Barack Obama, with whom Netanyahu met just last week in New York. Obama is scheduled to arrive on Friday morning, attend the funeral, and then get back on Air Force One in the afternoon for a return trip to the US.Before leaving for Israel, and as a token of his deep respect for Peres – upon whom he bestowed the Presidential Medal of Freedom in 2012 – Obama signed a directive ordering the lowering of US flags to half-mast in all government building and military bases, as well as the country’s embassies overseas.This is an honor that American presidents have bestowed on only six other leaders: Winston Churchill, Anwar Sadat, Yitzhak Rabin, King Hussein of Jordan, Pope John Paul II and Nelson Mandela.Netanyahu is tentatively scheduled to meet on Friday after the funeral with British Foreign Secretary Boris Johnson, for their first meeting; French President François Hollande; Ukrainian President Petro Poroshenko; and Brazilian Foreign Minister José Serra. He is also expected to meet with Valentina Matviyenko, the chairwoman of the Russian Federation Council who is constitutionally her country’s third-highest ranking official, and Russian Mideast envoy Mikhail Bogdanov.A spokesman for Netanyahu said the schedule may change, depending on time constraints. He said there were many more requests for meetings, but that the available time is very limited.Both Egypt and Jordan, with whom Israel has peace treaties, announced on Thursday they will send a representative, with Cairo to be represented by Foreign Minister Sameh Shoukry, who was last in Israel in July, and Jordan represented by Deputy Prime Minister Jawad al-Anani.Jordan’s King Abdullah II sent a letter of condolences on Thursday that had somewhat of an admonishing tone.“Mr. Peres’s effort in the Israeli-Palestinian peace process and his support for the two-state solution must be upheld and built upon by leaders in Israel and all stakeholders in the conflict,” he wrote.Abdullah said that Peres’s “contribution toward achieving peace and security in the region are more relevant than ever before, as the situation becomes more complex and the security of the entire region comes under threat. It is vital that the voices of reason prevail and the advocates of peace continue to lead the way.”Russia’s President Vladimir Putin phoned Netanyahu to personally convey his condolences. The Kremlin released a statement saying that Putin spoke about Peres’s “personal contribution to the development and strengthening of friendly and mutually beneficial relations between Russia and Israel and his consistent efforts to promote peace in the Middle East.”Turkey will be represented by only a senior official in the Foreign Ministry.Turkish President Recep Tayyip Erdogan famously stormed off a stage with Peres in January 2009, after the IDF’s Operation Cast Lead against Hamas in the Gaza Strip, when the two men had an angry exchange at the World Economic Forum in Davos. Erdogan told Peres, “When it comes to killing, you know well how to kill.”Among the attendees at the funeral will be more than 20 presidents, 10 prime ministers, more than 20 foreign ministers, five defense ministers, numerous other ministers and deputy ministers, a Spanish king, a British prince, and a duchess from Luxembourg.In addition, former Canadian prime minister Stephen Harper, former British prime ministers Tony Blair and David Cameron, and former French president Nicolas Sarkozy will attend.The funeral is to begin at 9:30 a.m.with a number of eulogies. Among those slated to speak are President Reuven Rivlin, Netanyahu, Knesset Speaker Yuli Edelstein, Peres’s three children, Obama, Clinton and author Amos Oz. Peres will be buried at about noon in the section of Mount Herzl reserved for the Great Leaders of the Nation. He will be interred next to former prime ministers Yitzhak Rabin and Yitzhak Shamir.Adam Rasgon contributed to this report.